Syria: The Battle Around Khan Shaykhoun 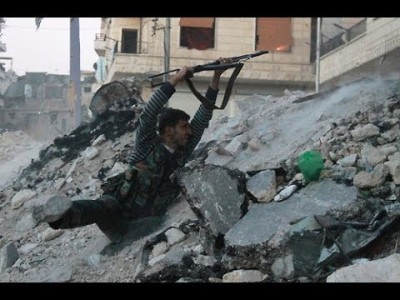 Osama Abu Zeid and Elizabeth Parker-Magyar report for Syria Direct on the important battle around Khan Shaykhoun in southern Idlib Province — insurgent success in clearing regime checkpoints would both lift the siege on the opposition-held town and threaten to cut off regime access to its positions and bases to the north:

Syrian rebels this week are trying to expand their gains around a captured piece of the M-5 international highway in southern Idlib province so as to block regime supply routes to northern Syria and establish a stronghold within striking distance of Hama.

The battle for this scrap of highway is unfolding in and around the town of Khan Shaykhoun, where regime barrel bombs are falling and ground fighting is ongoing. Only rebels and government forces are left now, with each fighting for the half of the city the other side holds.

Most residents have fled Khan Shaykhoun, considered “the connection between northern Hama province and southern Idlib province,” said Mohammed Ibrahim, a citizen journalist based in Idlib.

“The rebels now control a wide stretch of the international highway,” said Othman, the head of the Khan Sheikhoun Media Center, in a recent video he posted at the rebel-controlled al-Jiser checkpoint on the highway.

After cutting the M-5 highway at Khan Shaykhoun late last week, rebels hoped to overwhelm the remaining pockets of regime presence in Idlib province and create a logistical headache for the regime’s attempted push in Aleppo. Some rebel fighters have called the battle “the Gateway to Hama.”

In the past week, rebel groups advancing from the east of Khan Shaykhoun seized 10 of 21 government checkpoints in the city, which sits 30 kilometers (19 miles) north of regime-controlled Hama and 60 kilometers (37 miles) south of Idlib, where the government clings to control of Idlib’s capital city.

A walk through one of the checkpoints:

But in order to cut supply routes to regime troops scattered in the Ma’arat al-Nauman region and elsewhere in Idlib province, says Idlib-based journalist Ibrahim, rebels will need to capture all of Khan Shaykhoun.

“The rebels are still trying to gain control over checkpoints throughout Khan Shaykhoun to cut the road from that direction,” Ibrahim said.

Since the beginning of the year, rebels have slowly inched forward in the northern Hama and southern Idlib countryside surrounding Khan Shaykhoun.

In late January, they seized the northern Hama town of Mourik, five kilometers south of Khan Shaykhoun, extending an arc of control through the Idlib village of Tamana directly to the east and into the southern Idlib region of Maarat al-Nu’man.

A coalition of rebel groups are coordinating in the advance.

Footage of the fighting:

Jabhat al-Nusra claims to have consolidated control over the Tareq al-Ajeeb checkpoint, while clashes continued Wednesday pitting Free Syrian Army-affiliated groups and the Islamic Front’s Jaish al-Islam against regime soldiers at an 11th checkpoint further west in the city.

“The city is almost devoid of civilians,” says a citizen journalist who asked to be identified only as Othman.

In a promotional video advertising their relief efforts, the Islamic Front described “unprecedented rates of displacement.”

Before rebels seized their first checkpoint, known as al-Faqir, in the town, civilians were trapped inside the perimeter of the government’s checkpoints, said Othman. “It was not possible to enter or exit, except through secret paths at night,” he said.

“The capture of Al-Faqir guaranteed an exit point so civilians could leave.”