Syria Op-Ed: “Sieges Must Be Broken By Any Means Necessary” 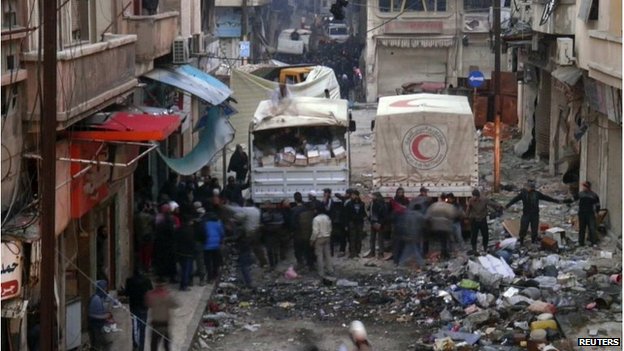 The Syrian people are starving. According to the United Nations, about 800,000 civilians are currently under siege. In areas around the cities of Homs, Aleppo and Deir Ezzor and in parts of the capital, Damascus, no food, medical supplies or humanitarian aid can get in, and people can’t get out. Many have already died under these “starvation sieges” and hundreds of thousands teeter on the brink, subsisting on grass and weeds. In Damascus, a cleric has ruled that under these conditions, Muslims are permitted to eat normally forbidden animals like cats, dogs and donkeys.

This is not a famine. Food is abundant just a few miles away from these besieged areas. Military forces — mainly the army of President Bashar al-Assad, but in some cases extremist anti-Assad militias — are preventing food and medicine from reaching trapped civilians. In addition to starving, many people in besieged areas have been stricken by diseases, including polio, but can’t get medical treatment because doctors can’t get through.

This moral obscenity demands action by the international community. Any armed group that prevents humanitarian access — whether the Syrian regime’s forces or rebel militias — should be subject to coercive measures.

France’s foreign minister, Laurent Fabius, has denounced the international community’s failure to prevent starvation as “absolutely scandalous” and is now calling for “much stronger action.”

The news that France may propose a strong Security Council resolution is welcome, but Mr. Fabius hasn’t made clear whether such a measure would invoke Chapter VII of the United Nations Charter, which allows the Security Council to enforce its directives through military action. If it doesn’t, the resolution will be inadequate.

The recent attacks on the convoys attempting to deliver humanitarian aid into the besieged city of Homs are a case in point: the lifting of the sieges can’t be left to the warring factions on the ground. An external, international force must be introduced to guarantee the safe passage of food and medicine to starving Syrian civilians.

The Russian president, Vladimir V. Putin, remains a major obstacle. His government has vetoed three Security Council resolutions on Syria since October 2011 and Russia has said it would support measures on humanitarian issues only if Syria agrees to them. But Mr. Putin’s geostrategic calculations and Mr. Assad’s coldblooded recalcitrance cannot be allowed to stand in the way of thousands of Syrian civilians eating.

If Russia blocks meaningful international action, and if the Assad regime or any rebel group refuses to allow humanitarian aid into the besieged areas, the sieges must be broken by any means necessary.

We should invoke the Responsibility to Protect, the principle that if a state fails to protect its populations from mass atrocities — or is in fact the perpetrator of such crimes — the international community must step in to protect the victims, with the collective use of force authorized by the Security Council. And if a multinational force cannot be assembled, then at least some countries should step up and organize Syria’s democratically oriented rebel groups to provide the necessary force on the ground, with air cover from participating nations.