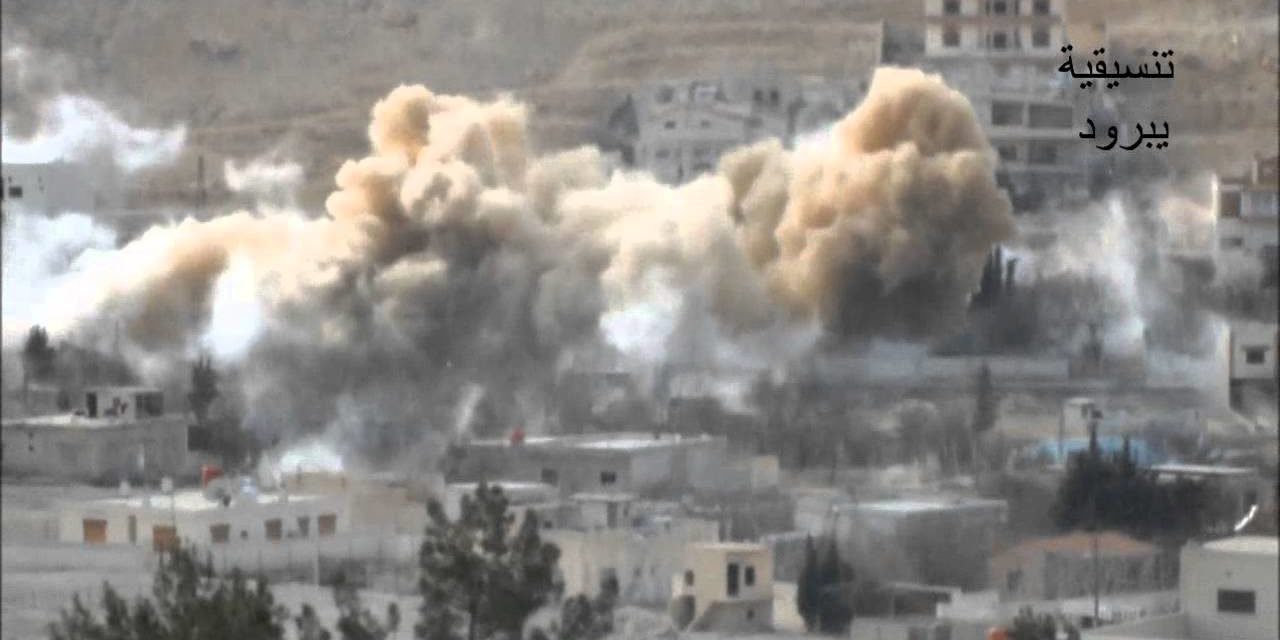 A day after the United Nations Security Council called on all sides to end violence in Syria, President Assad’s military responded with airstrikes the country.

Video testified to bombings from Aleppo Province in the northwest to the town of Yabroud, under siege by Syrian forces, north of Damascus to the Old City in Daraa in the south of the country.

An attack on Yabroud:

The Local Coordination Committees said 104 people were killed on Sunday, including 36 in Aleppo Province, 23 in Deir Ez Zor, 13 in Daraa Province, and 11 in Idlib Province.

Saturday’s UN resolution, passed unanimously by the Security Council, called for cease-fires. It also demanded that aid be allowed into besieged areas, noting in particularly the Syrian regime’s obstruction of assistance.

A Lebanese “security source” said Israeli planes bombed a Hezbollah stronghold in Janta in east Lebanon, near the Syrian border.

The source said Israeli planes targeted a “qualitative” weapons shipment, launching four rockets. He said Hezbollah recruited and trained fighters in a post in Janta, which is also a route for arms smuggling between Lebanon and Syria.

The number of casualties is unknown.

Activists, including the Local Coordination Committees, report on the situation of civilians from Aleppo fleeing regime bombing:

Yesterday we went to a bus depot near Kilis Camp, a Syrian refugee camp in Southern Turkey, and found Syrians who had clearly come with all they could carry. Some were asleep on mattresses on the floor, others on chairs. The number of people was more than we expected. Syrians arrive in waves; sometimes you reach the depot to find no standing room. We also heard that the Turkish police were kicking people out at night, but a few lucky Syrian families get taken in for the night by generous Syrian and Turkish families who live nearby.

Some Syrians who make it across the border disburse into the nearby city and its countryside, often living in abandoned buildings or mosques, where makeshift food kitchens cook and distribute meals. Many Syrians go to Kilis Refugee Camp but would leave because of the poor conditions if their financial situation permits…..

We asked the local activists what the greatest needs are in order of importance:

1. There is a dire need for infants’ milk in Kilis and along the border. Mothers are feeding their babies sugar diluted in water as a substitute.

2. There is a need for cooking ingredients and cooking gas to support the temporary food kitchens in Kilis, where many people go to get their meal for the day. 1,000 Turkish Lira worth of food supplies is able to sustain a kitchen for five days.

3. There is a great need for clothes, particularly for children.

In terms of logistics, the local activists that we met have close relationships with local businesses that sell in bulk. Those businesses are helping by selling items at discounted prices once they hear that the items are going towards humanitarian relief for Syrians.

Activists have posted the names of 14 people killed by three regime airstrikes on Monday on the town of Nashabia in Eastern Ghouta, near Damascus.

Tucked away in a New York Times article on the Supreme Military Council’s dismissal of its commander Salim Idriss — and without full acknowledgement of its significance — is this belated recognition about a raid by gunmen on Free Syrian Army warehouses in December:

Last year, (Syrian Revolutionary Front) fighters loyal to the Idlib-based rebel commander Jamal Maarouf seized weapons from the…storehouses on the Turkish border, according to people present at the time.

Though Mr. Maarouf did not respond to requests for comment, one of his allies, Mohammed Zaatar, confirmed the account.

At the time, the US Government put out the message that the Islamic Front, Syria’s largest insurgent bloc, carried out the raid — even though the Front, the Supreme Military Council, and the Syrian National Coalition all said the FSA had asked the Front to protect the warehouses from further attacks.

Mainstream media have repeated that message on numerous occasions over the next 2 1/2 months.

The Times article also points to the tension between the SRF and other insurgent factions:

Mr. Zaatar spent the first half-hour of a recent interview complaining about other rebels without once mentioning the Syrian government.

When asked why he refused to cooperate with the Islamic Front, a powerful coalition of Islamist fighters, he accused one of its members, Ahrar al-Sham, of keeping all the loot from a battle his men had participated in.

“My fighters don’t understand why they should fight next to Ahrar al-Sham,” he said.

The pro-opposition Orient News reports heavy losses for Syrian forces in a counter-offensive near Quneitra, close to the demilitarized zone with Israel. The outlet claims losses of 170 soldiers and 10 tanks.

Insurgents have advanced through the area in southern Syria in recent weeks.

A detail in the story of last week’s effort by the Syrian National Coalition and Supreme Military Council to dismiss the head of the SMC, General Salim Idriss — Idriss’ proposed replacement, Abdul-Ilah al-Bashir, was not told that he had been selected for the job:

My friend called and told me, “Congratulations.” I asked him, “Good news?” He said to turn on the television.

I swear to God, no one was in touch with me. I knew nothing about it.

The attempt to remove Idriss soon ran into trouble: the General, supported by 15 other commanders, renounced the “improvised, illegal, and unconstitutional” effort, called for the dismissal of the Coalition’s Defense Minister, and broke from the SMC.