Syria: The Supreme Military Council, Its PR Outlet, & Its Criticism of Obama 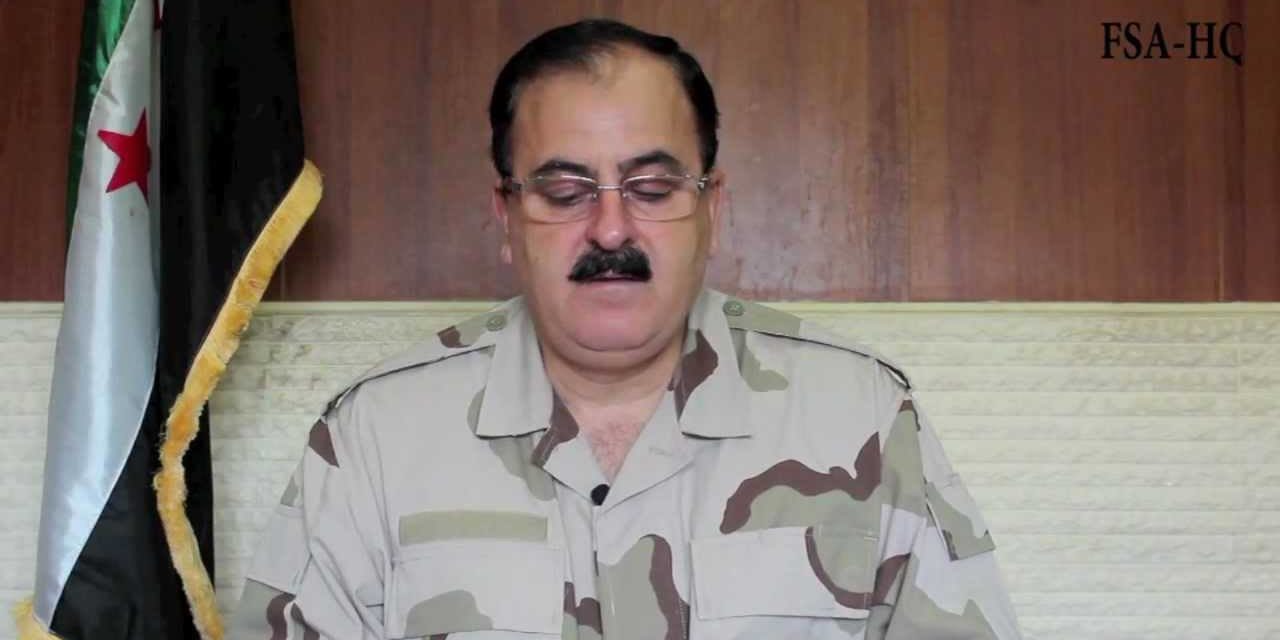 On the surface, the piece parallels recent critiques of US policy, including EA’s “The US & the Islamic Front — Washington’s SNAFU Continues”.

However, the Politico article is far more than that.

This is not reportage. Neither is it primarily analysis.

First and foremost, the article is a PR offensive on behalf of the Supreme Military Council, the opposition command based in Turkey — an offensive based on criticism, either from resignation or in the hope of bringing change, of the Obama Administration’s Syria policy:

It’s hard to pinpoint just when, exactly, Barack Obama’s Syria policy fell apart. Was it in December, when Islamists humiliated U.S.-backed rebels by seizing what limited supplies America had given them? Was it back in September, when Obama telegraphed his reluctance to enforce his own “red line” after the Syrian regime used chemical weapons on its own people? Was it in the months beforehand, when the administration quietly and mysteriously failed to make good on its pledge to directly arm the rebels? Or did it collapse in August 2011, when Obama called on Syrian dictator Bashar Assad to go, only to do almost nothing to make it happen?

Weiss, formerly an activist with the neo-conservative Henry Jackson Society in London, is a prolific writer on Syria. His primary outlet is NOW Syria, an offshoot of the NOW Lebanon site, but his work has also appeared in prominent US media such as Foreign Affairs and Foreign Policy.

Weiss is not just a supporter of the Syrian insurgency. He has been a leading advocate for the Free Syrian Army and the Supreme Military Council, linked to the opposition Syrian National Coalition, since he travelled to northwest Syria August 2012, while he was still with the Henry Jackson Society. In his commentaries, he repeatedly invokes “those close to [Council head General Salem] Idriss“.

In August 2013, the SMC and its head Salem Idriss were trying to recover from a series of setbacks, notably the loss of Qusayr to regime forces in June and the rise of other insurgent factions outside the Council. So Weiss used interviews with an FSA commander and SMC supporters to argue for a boost in foreign assistance to the Council, not only to defeat Assad’s troops in the south but to take over the fight from other insurgent factions elsewhere:

Recent progress not only underscores the ability of external actors to influence the Syrian war even at this late stage, but it also points the way for how state actors might still try to salvage the rebellion in the radicalized northern and eastern fronts….

A joint American-Saudi pressure campaign to eliminate fundraising mechanisms based in the Gulf that bypass the SMC infrastructure would directly weaken the prowess and manpower of extremist rebel groups operating in Syria.

However, Weiss’s two-part “call to arms” in August was overtaken within days by the Assad regime’s chemical weapons attack on the Damascus suburbs, and the subsequent US decision not to pursue a military response.

Equally important, his call was surpassed by developments in the insurgency. Dissatisfaction with the SMC was one motive prompting the merger of 13 insurgent groups in northwest Syria, and then the union of more than 40 near Damascus in September. In November, seven leading factions — with significant backing from Saudi Arabia — created the Islamic Front. As an EA analyst noted at the time:

[Outsiders] may try to stick with the Syrian National Coalition and the Supreme Military Council. That will be totally irrelevant, since the SMC is dried-out anyway. The Coalition and its interim government lacks support in Syria, and only addresses the very tiny percentage of Syrians who actually know such a body exists somewhere in Syria’s outer space….

[However] the Supreme Military Council’s Free Syrian Army [is] not dead. The founding of the Islamic Front will not change reality, like cooperation on the battlefields, and if General Idriss’ followers can establish a sort-of-central command structure some day, military alliances will work even better.

After initially chastising the Islamic Front, the US Government decided to try to find an accommodation with it through talks in Turkey. That effort has faltered. However, for the SMC’s leaders, Washington’s attempts to talk to the Islamic Front raised the uncomfortable prospect of a US switch of its political backing to the Front, or at least a pursuit of neutrality between the groups, even as Saudi Arabia stepped up its assistance to the new insurgent bloc.

Weiss’s opening polemic against the US Government’s failure to provide support to the FSA and SMC — a well-founded criticism — is followed by his creation of the “insurgency”, presented as a choice between the moderate FSA/SMC and the “extremists”:

It did not take long for al Qaeda to smell an opportunity….

In Syria, there are now two al Qaeda affiliates or offshoots. The strongest is the Islamic State of Iraq and al-Sham (ISIS), by far the more brutal and uncompromising of the two…..

When I interviewed FSA fighters, including Islamists, in southern Turkey in mid-September, their common refrain was that they now faced two mortal enemies. “Bashar al-Assad is beautiful compared to the Islamic State,” one rebel aligned with the SMC told me at the time.

Even if one accepts Weiss’s sketchy description of ISIS and Jabhat al-Nusra as missionaries for “Al Qaeda”, laying “the groundwork for a totalitarian counterpart to the regime”, he has a problem. ISIS, however brutal it may be, is far from the strongest faction in the insurgency, as current developments are establishing.

So how does Weiss deal with the most important emergent force, the Islamic Front?

He does so in part with some fast-and-loose reworking of “facts”. For example, he reduces the leadership of the Front to one man, Zahran Alloush of Jaish al-Islam. Alloush is not even the head of the Front’s Shura Council — instead, he is director of military operations — but he serves as a convenient “straw man” for the implacable division between the Front and the Supreme Military Council:

[Alloush has] been outspoken in his hatred of the SNC [Syrian National Coalition]…and dismissive of the SMC and its Western-supplied aid, which Alloush has deemed negligible….

Alloush and Idris hate each other….Alloush also refused to recognize the SNC, the political arm of the SMC, and apparently asked for too many seats for his own Army of Islam representatives [on the Council].

Then there is Weiss’s re-creation of an event in early December::

At midnight on Dec. 7, about 60 armed fighters from Jabhat al-Nusra, some wearing explosive suicide vests, raided the First Battalion of the SMC in the al-Waqi mountain near Atmeh, a town just across from the Syrian-Turkish border….

The account is a curious mix of information which has some support, and assertions with no apparent backing. Immediately after the December events, some Free Syrian Army members said the Islamic Front had attacked the warehouses. Others claimed that the Islamic State of Iraq and as-Sham or another armed group were responsible. Ironically, Jabhat al-Nusra — Weiss’s culprit — was not blamed at the time.

The Islamic Front, the Syrian National Coalition, and even the Supreme Military Council soon said that the FSA had called in the Islamic Front to protect the warehouses after the raid, which was likely carried out by members of the Syrian Revolutionary Front.

Weiss accepts this, but seeks another way to criticize the unreliable Alloush and Islamic Front: “Rather than offer reinforcements, they took possession of all SMC complexes and warehouses in Atmeh and commandeered all supplies contained therein including food, medical kits, communications equipment and vehicles.”

Well-placed sources inside Syria tell a different story. The warehouses have not been “commandeered”. Instead, an inventory of the looted warehouses was taken, and the FSA retained possession of all supplies and equipment. The Islamic Front continues to guard the warehouses until the FSA can arrange sufficient protection.

But this reality would intrude on Weiss’s overarching theme: “The fear of a once mainstream rebellion turning sectarian and extremist—serially trotted out by American policymakers as a justification for not intervening in the conflict earlier — has now been realized in the absence of any real or meaningful intervention.”

Of course, that theme fits Weiss’s pre-disposition. But what of the supposed facts to support it? The explanation is straightforward: as the author notes, his information comes not from the ground in Syria, but from US-based supporters of the Supreme Military Council.

To be fair to Weiss, not all of his critique rests on the promotion of the “moderate” SMC vs. the “extremists”. The better part of his argument is that the Islamic Front and US Government have irreconcilable views on the next steps in the Syrian conflict:

[The Front’s] primary objective is the “toppling of the regime” and the abolition of Assadist state institutions, from the security services to the military….[This] is diametrically opposed to longstanding and articulated U.S. policy goals for Syria, which are premised on negotiations and the preservation of core regime institutions.

That should give Weiss the opportunity to offer an unreserved “solution”: Washington should restore and escalate its support of the SMC, including the provision of weapons, to seize the initiative from other insurgents and lead the fight against Assad.

But, in the end, even he cannot maintain his PR efforts. Maybe it is the recognition that the SMC is no longer in a position to claim sole, or even primary, leadership of the insurgency. Maybe it is the grudging admission that the Islamic Front has the potential to be more effective in the fight against Assad. Maybe it is resignation that the Obama Administration will never heed his advice.

In any event, his final paragraphs give up the “solution” to return to a long, wandering, tangled diatribe against Washington, declaring that it has allied with Assad:

In effect, the United States is encouraging the regime to defeat the rebels along the delivery route whether they are the U.S.-backed FSA, the Saudi-backed Islamic Front or the al Qaeda affiliates Nusra or ISIS. Then, once defeated, Washington will condemn the way the regime goes about its business, which inevitably involves dropping incendiary bombs from warplanes and helicopters and massacring scores of civilians, many of them women and children.

Weiss’s mission is exhausted. In the final sentences, consumed by the criticism of the US, he abandons the SMC for the alternative he derided earlier in the article:

For months now, U.S. officials have mouthed a mindless catechism: “There is no military solution to the conflict.” To this can now be added that Assad is here to stay and that the real challenge ahead is getting everyone to work together to defeat al Qaeda.

Yet Saudi Arabia and the Islamic Front have plainly got other plans.