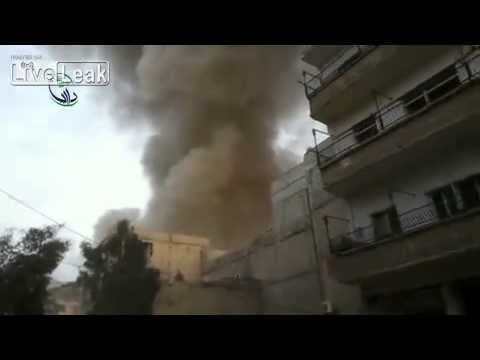 United Nations envoy Lakhdar Brahimi has insisted on his small advance in negotiations between the Assad and opposition delegations: “There is agreement from armed groups in Homs not to attack an assistance convoy.” He said the UN was awating regime permission to move.

Brahimi said that women and children were welcome to leave the Old City in Homs immediately.

Earlier, Assad’s representative had dismissed an arrangement just for Homs, saying it had to be for all Syrian cities, and opposition delegates said the regime group had shown “hostility” as they referred the matter to Damascus for a decision.

The envoy, referring to his main theme for today’s discussions of exchanges of detainees, said that the Government had requested a list of detainees held by insurgents. The Syrian National Coalition responded that they will get names of people held by “groups they have control over or contact with”.

Brahimi said he saw the two sides in the same room in the morning and shuttled between them in the afternoon. Talks were “extremely difficult” and “complicated”, but “We have ‘mutual respect’ between the regime and the opposition.”

The envoy said he expected on Monday “to listen to a general statement from each side for the way forward” to resolve the conflict.

Speaking after Brahimi, Deputy Foreign Minister Feisal Mikdad said the Government is ready to provide shelter, medicine, and aid to every civilian allowed to leave Homs. He added, “We are ready to allow any humanitarian aid to enter in coordination with UN organizations.”

Mikdad stood his ground on wider issues, saying that President Assad will not leave power for a transitional governing authority: “He is the President of the Syrian Arab Republic until the Syrian people say something else. The only solution is elections.”

The Deputy Foreign Minister said the regime delegation was in Geneva “to find a solution to this alien presence in Syria…and restore the country to what it was before”.

He then swiped at the US, “(Former US Ambassador to Syria) “Robert Ford has failed to bring a credible opposition delegation to negotiations.”

Little detail has come out of the morning “dialogue session”, brokered by UN envoy Lakhdar Brahimi between the Assad and opposition delegations, at the Geneva II conference.

The regime delegation appeared to cast doubt on Brahimi’s claim of an arrangement to deliver aid to besieged civilians in Homs, saying that not only Homs but all Syrian cities should be considered “within the framework of the response plan set by Syria and the UN”, as “the Syrian state does not distinguish between a citizen and another”.

The delegation added that the issue was “not related to the conception of the conference”. Before the meeting, Syrian Information Minister Omran al-Zoubi said humanitarian considerations were a “second priority” to security arrangements.

Obeida Nahas, a member of the opposition delegation, said a convoy of 12 trucks with humanitarian aid has not been allowed into Homs. He said the Syrian government delegation asked to refer back to Damascus before giving its final answer on a truce.

“Unfortunately we felt there was hostility, and an insistence to focus on issues of combating terrorism,” Nahas said. “They tried to lecture us.”

According to SNC sources from inside #Syria, regime security forces refused to allow an aid convoy to reach besieged #Homs. #Geneva2

At least 4,000 civilians are still in Hom’s blockaded neighborhoods. Speaking to The New York Times, Hassan Abu al-Zain, a spokesman for the Revolution Youth Coalition there, said nine people had died of malnutrition, scores had been sickened by unclean water, and families were eating weeds to survive.

The apparent collapse of any arrangement on Homs overshadowed Brahimi’s earlier announcement that Sunday’s talks would focus on the issues of detainees and the abducted.

The opposition said it presented a list of 47,000 detainees, with priority cases of 2,500 women and children.

Al-Zoubi put the onus on insurgents, “There are thousands of kidnapped by the armed terrorist groups for more than two years and the coalition delegation should submit lists of their names and be responsible for their release.@

The headline on Syria this morning is of an initial, small agreement in the Geneva II talks between the Assad regime and the opposition, raising the possibility of aid to civilians in Homs.

Meanwhile, the story which is not being covered is another spike in the Syrian military’s bombing campaign.

The Damascus suburb of Darayya was particularly hard-hit on Sunday, with at least another 10 bombs falling on the town amid protracted fighting between regime forces and insurgents for control of the area. President Assad’s warplanes have also dropped dozens of explosives in and near Aleppo, Damascus, and other parts of the country.

Aftermath of an attack on Darayya this weekend:

The Local Coordination Committees claim 66 people were killed on Saturday, including seven women and 13 children. OF the deaths, 29 were in Aleppo Province and 18 in Damascus and its suburbs.

In Geneva, United Nations envoy Lakhdar Brahimi will continue his shuttle discussions between the Assad and opposition delegations, focusing today on detainees and the kidnapped.

The two sides sat in the same room for the first time on Saturday morning, but only spoke through Brahimi and not to each other. The heads of the delegations, Foreign Minister Walid al-Moallem and Syrian National Coalition head Ahmed Jarba, did not attend.

The Free Syrian Army’s Homs Front Command has called for immediate provision of aid in the city, with pressure on the Syrian regime to accept the delivery.

The statement follows the announcement by United Nations envoy Lakhdar Brahimi of an agreement among armed groups in Homs to allow the assistance, but with the UN still trying to get agreement from Damascus.

The Command said it would respect any temporary cease-fire and called for “humanitarian corridors” to people — especially the young, elderly, ill, and wounded — to leave Homs.

JMA has been an independent faction since its former leader, Umar al-Shishani, split off from it in November after swearing an oath to al-Baghdadi, the leader of ISIS. JMA leader Salahuddin Shishani has strongly condemned the fighting between ISIS and other insurgent groups.

Sayfullakh’s group joined Jabhat al-Nusra, however the Chechen jamaat appears to have retained its integrity as a unit and fights together with other groups as and when it is needed. Sayfullakh has recently condemned the fighting against ISIS and said he will not take part in it.

Footage from the Hezbollah channel Al-Manar claiming a weekend air excursion by Assad supporters to the Division 17 military base and Tabaqa military airport in north-central Syria:

The supporters distributed care packages and winter clothes to soldiers, who have been besieged by insurgents.

“We will draw strength and energy from those shabab [soldiers],” said a member of the delegation.

Video: Residents Return to Homes in Damascus Suburb of Barzeh After Local Cease-Fire

State media proclaims the return of “hundreds” of residents in Barzeh as part of “national reconciliations”:

The regime claims that the agreements in Damascus suburbs are bringing stability after months of fighting. Opposition activists assert that residents are being forced to agree terms amid the threat of starvation and that assistance is still restricted — Qusai Zakarya in Moadamiya:

The Assad regime is trying to turn people against one another, using food as a weapon of war and as a weapon to divide us. The regime has allowed the delivery of only three shipments of food containing just one meal per person since we agreed to the truce and raised the regime flag.