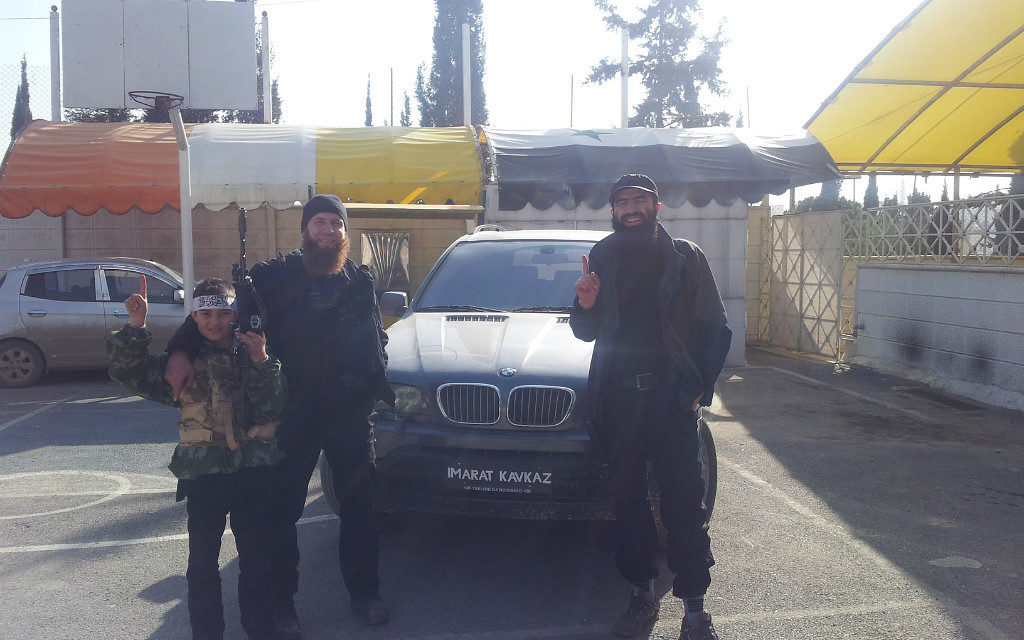 Ethnic Chechen jihadi Sayfullakh Shishani, the former second-in-command of Umar Shishani, has released a 24-minute video in which he criticizes the fighting in Syria between the Islamic State of Iraq and ash-Sham (ISIS) and other insurgents, including the Islamic Front.

Sayfullakh split from Umar in Summer 2013, when both were still members of the largely Chechen and North Caucasian faction Jaish al-Muhajireen wal-Ansar, after the latter accused him of “fitna” (sedition).

However, it is likely the split was largely ideological, with some Chechen fighters disagreeing with Umar’s growing closeness to ISIS. In November, Umar formally swore an oath to ISIS leader Abu Bakr al-Baghdadi, leaving Jaish al-Muhajireen wal-Ansar. Meanwhile, Sayfullakh and his group of men joined Jabhat al-Nusra. Both Sayfullakh and Umar acted contrary to other Chechen and North Caucasian fighters, who chose to retain loyalty to the leader of the Caucasus Emirate, Dokku Umarov.

Despite this, Sayfullakh, who like Umar is an ethnic Chechen from the Pankisi Gorge in Georgia, has retained an emotional connection to the conflict in Chechnya, threatening the Chechen leader, Ramzan Kadyrov, in a recent video address.

In this new video, Sayfullakh also addresses the situation in Chechnya, saying that the leadership has damaged the Chechen people by refusing to establish the correct version of Islam and by allowing secular and even Christian symbols to appear in the country. Once again, Sayfullakh threatens Kadyrov, and calls on Chechens to rise up against him.

Sayfullakh — who chose to fight in Syria rather than Chechnya, likely because the security situation in the North Caucasus meant that it was far easier to reach Syria via Turkey than to fight in Chechnya — relates his position in Syria, which he describes as part of a struggle by Muslims against the “infidels”, as connected to the struggle in Chechnya and beyond.

Notably, Sayfullakh distinguishes between the “jihad” that he believes he is waging on the ground in Syria, and between the ideology of jihad discussed by Islamic scholars or jihadi thinkers. He uses a phrase we have noticed elsewhere in recent writings and expressions of North Caucasian jihadis in Syria, saying he has no interest in “what one sheikh says to another sheikh”.

I want to talk about the fitna in the land of Sham.

I am very unsatisfied with this fitna.

We didn’t want this fitna to happen.

We are in the midst of brothers, we are all brothers together, we all help each other.

Sayfullakh says that the fitna is being carried out by the “Jaish al-Hur”, (the FSA — he pronounces the name incorrectly the first time and conflates the FSA with the Islamic Front and other non-ISIS groups), and that there have been rumors that he had taken part in the fighting against the FSA.

Sayfullakh says that the fighting has caused Allah to intervene in events in Syria, to the detriment of him and other jihadis:

When we came here earlier, Allah liberated a great deal of territory for us. Now it’s the opposite, the infidels are kicking us out…. This place that we took, the infidels just kicked us out. In our jamaat, 120 people were wounded. Stop this fitna, Subhana’llah!”

Sayfullakh says that the sides should “sit down and talk and decide things”.

He emphasizes that everyone involved — the Free Syrian Army, Jabhat al-Nusra, and the Islamic Front and ISIS — should all fight against the infidels.

The infidels are advancing every day! Every day! They took the ribat (the front)… I am in Jabhat al-Nusra. Thank Allah, Jabhat al-Nusra looks after us. Every day. How much they want to help us, to help our sisters,” he says.

Sayfullakh says that many of “the brothers” had left.

He appears to refer to the closure of the Turkish border, saying that “the closing” had affected the entry of fighters into the country.

Even if his father was Bin Laden, he is still an infidel.

Everyone who fights against the Muslims is an infidel. This is my motto.

We are not afraid of anyone apart from Allah. We would not even be afraid of Bin Laden. We want the religion of Allah to be established on this land…

Some of our brothers are on this side, some are on that side, I don’t know who is going to sort this out, we already left to a new place and we are waiting for news.

Sayfullakh calls on his listeners to pray that the Caliphate and Sharia Law will be established in Syria, and that Muslims would then emigrate and resettle there.

Sayfullakh then switches to the issue of women, saying that the women living among them were afraid and some had been taken prisoner.

He says the fighting only benefits the “infidels”.

Stop the fighting for Allah’s sake! The infidels want us to fight each other. We don’t want this war! Let’s free our sisters! Let’s free our children! Children who are in prison…

Sayfullakh says that those who do not do so must say to themselves, “you are not a Muslim, you are not a man”. He adds that thousands of women have been taken prisoner.

He now makes a wider address to Muslims, saying that they should stand up and fight the infidels, whether they are in “Iraq, Afghanistan, Chechnya, Uzbekistan”.

Wherever you are, fight against the infidels! They will annihilate us. They must be killed. Their democratic regimes must be removed and the law of lā ʾilāha ʾillā-llāh’ (There is No God But Allah) must be established.

Sayfullakh then leads his men in a takbir.

Sayfullakh now has a few words to add about Chechen leader Ramzan Kadyrov, and makes an address to the Chechen people.

What type of man is he? You have humiliated us, for God’s sake. What kind of Islam is it? You put up a Grandfather Frost (the Russian equivalent of Santa Claus, considered a Christian symbol). What sort of Presidents have we had?

Sayfullakh says that all the Chechen presidents have humiliated the Chechen people, including by “putting up Grandfather Frosts and reciting poetry”.

He calls on the Chechen people to arise and fight the infidels, and addresses Kadyrov, saying that he, Sayfullakh Shishani, will kill him.

He is not afraid, he notes:

He calls once again on the Muslims to rise up against the infidels in the Caucasus and Uzbekistan, “and in Iraq and in Afghanistan and in the whole world. We will ruin you, will will kill you.”

He swears that they will liberate the entire Muslim world from the infidels, and if they don’t live to see that day, then their descendants will do it.

Sayfullakh later allows one of his men to give an address in Arabic, for the benefit of Arabic speakers.