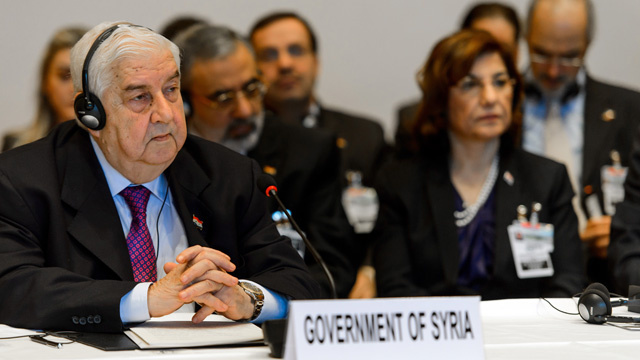 UPDATE 1600 GMT: United Nations envoy Lakhdar Brahimi says the Assad and opposition delegations have finally agreed to sit in the same room on Saturday. There is no indication, however, that they will speak to each other, only to the envoy.

Brahimi rebuffed the threat of the regime delegation to leave on Saturday:

President Assad’s delegation at the Geneva II conference has refused to enter direct talks with the opposition Syrian National Coalition.

United Nations envoy Lakhdar Brahimi had hoped the discussions could begin on Friday afternoon, but both Foreign Minister Walid al-Moallem and senior Assad advisor Bouthaina Shaaban made clear on Thursday that there could be no exchange unless the opposition renounced “terrorism”.

Shaaban went farther and said the Coalition, led by Ahmed Jarba, only represented a small number of the Syrian people.

The Coalition also refused direct discussions unless the regime delegation accepted a June 2012 clause for a transitional governing authority, one which the opposition insists will not include President Assad.

“We have explicitly demanded a written commitment from the regime delegation to accept Geneva 1. Otherwise there will be no direct negotiations,” opposition delegate Haitham al-Maleh said.

Brahimi will meet the two sides in the same room on Friday and explain how he plans to proceed; however, while al-Moallem and Jarba will address the UN envoy, they will not speak to each other.

(UPDATE: Looks like the two sides cannot even agree to be in the same room — journalist Laura Rozen:

We have started to look into the future without [the President. Assad and all of his regime is in the past now. Nobody should have any doubt that the head of the regime is finished. This regime is dead.

Secretary of State John Kerry paralleled the comments, maintaining his tough line from Wednesday’s opening statements, “This is a man who has committed war crimes and still somehow wants to claim legitimacy to be able to govern the country.”

Insurgents of the Islamic Front distribute grain confiscated from an Islamic State of Iraq and as-Sham warehouse in Anadan in Aleppo Province:

Amid the “peace” conference in Geneva, the Assad regime stepped up bombing on Friday, hitting insurgent-held areas in Damascus, Aleppo, and other locations.

Aftermath of one airstrike:

More than 20 bombs were dropped on Aleppo alone. Insurgents detonated two of them in the air with anti-aircraft fire. A regime helicopter was also hit, but was able to escape:

An attack in West Ghouta, near Damascus:

The Damascus suburb of Darayya, where there has been intense fighting between insurgents and regime forces:

The Lebanese branch of the Islamist faction Jabhat al-Nusra has warned civilians to stay away from all Hezbollah facilities and gatherings.

Jabhat al-Nusra has carried out two bombings in the last eight days, including Tuesday’s blast in south Beirut, that killed nine people.

The group, a leading faction in the fight against the Assad regime, said it will continue the attacks unless Iran and Hezbollah withdraw their fighters from Syria.

Michel Kilo, a member of the Syrian National Coalition’s delegation in Geneva, has said the opposition will produce proof of the Assad regime’s links with the Islamic State of Iraq and as-Sham.

“There are photos that have been found of several emirs of ISIS with Bashar al-Assad,” Kilo said. He continued:

The pictures were taken before they became emirs in ISIS, when they were all officers in the Syrian special service. There are documents sent by the special service to ISIS telling them to capture or kidnap people in Raqqa and Jarabalus, and these documents will be published. And you will see how the regime fabricated these extremist groups that did not exist in our country at the beginning of the revolution.

Insurgent factions are fighting ISIS — which has been accused of kidnappings, torture, and killings of both civilians and factions — across northern and eastern Syria.

Protests in Idlib Province challenges the Assad regime over this week’s report of the torture and killing of 11,000 detainees in Syrian prisons:

Saqba in East Ghouta, near Damascus:

Foreign Minister: We Leave Geneva on Saturday If No “Serious” Talks

A threat from Foreign Minister Walid al-Moallem, the head of the regime delegation:

Syrian Information Minister: Assad To Stay In Power Until Elections

“The Syrian President will stay in power until elections are held, which must be democratic and in which everyone can participate, but before they are organized terrorism needs to be overcome, and there must be an end to the killing of civilians,” Zoubi told reporters at the Geneva II conference.

Child Dug Out From Rubble Alive In Aleppo

Footage from Thursday shows a young girl being dug out alive from underneath rubble in al-Ma’asaraniyeh, Aleppo (click here for a map).

There are claims that ISIS has issued a new circular in Al Bab in Aleppo province, promising amnesty to all those who fought against ISIS who surrender their weapons. ISIS have opened a special office for complaints and promise to lower the prices of gas and bread. (Click for an image of the circular.)

State Media: There is No Opposition Group at Geneva II

Syrian State news agency SANA has stopped referring to an “opposition” delegation at the Geneva II conference. Instead, discussing attempts by the UN to bring the regime and opposition groups together for talks, SANA uses the term “the coalition delegation called ‘opposition'”:

Deputy Prime Minister, Foreign and Expatriates Minister, Head of the Syrian official delegation to Geneva 2 conference met on Thursday the UN envoy to Syria Lakhdar Brahimi. Talks during the meeting, which was held at al-Moallem’s residence in Geneva, dealt with the procedural arrangements to launch dialogue with the coalition delegation called “opposition “at the UN headquarters in Geneva at 11 a.m on Friday.

The Minister of State for National Reconciliation, Ali Haidar, drives home the message:

Those who call themselves “opposition” have no real presence or representation on the ground and they are talking with the tongue of the US and the Gulf states to serve their interests.