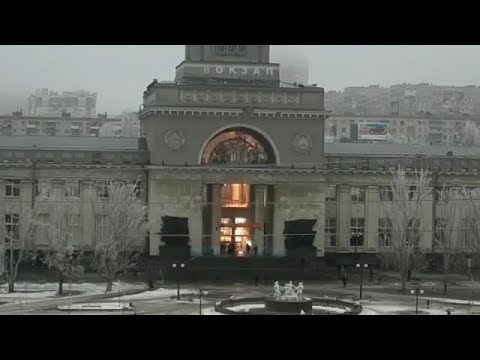 Russia’s security forces are unprepared for the “dangerous, cruel and clever” adversary facing the Volgograd oblast, according to Andrei Serenko, a Volgograd-based political scientist and journalist.

36 people died and over 70 more were injured in two terror attacks in Volgograd, ahead of the New Year holiday. The first attack occured in the city’s station on December 29 and the second on a trolleybus on December 30. Russian security forces have said that suicide bombers were responsible for both attacks.

Video of the December 29 explosion

Footage of the aftermath of the December 30 explosion

While no group has claimed responsibility for the attacks, Russian media has noted that they came after a threat made in a July 2013 video message by the Emir of the Imarat Kavkaz (Caucasus Emirate), Dokku Umarov, who said that he was overturning a previous moratorium on terror attacks in the Russian Federation because of a need to disrupt the 2014 Winter Olympics in Sochi.

Serenko’s remarks — that the Russian FSB is not able to effectively deal with the prevention of terror attacks, especially in the periphery — have been echoed by other commentators, including retired FSB operatives, who say that many security personnel with counter-terrorism expertise and experience have left the agency, leaving it weakened in that area.

Local experts in the Volgograd region say that the area has become a target for a network of terrorists, largely because they have been able to operate without detection.

Kavkazskii Uzel, a Russian-language outlet that reports on events in the North Caucasus, quoted Serenko as saying that Russia’s security forces were unprepared to deal with the situation in the city and surrounding area.

The terrorists who perpetrated the attack were “more professional” than the security forces, Serenko said.

“The terrorists who came to the Volgograd region clearly know what they want. They have a designated purpose, and they are more professional than the Volgograd security services in achieving this goal. The main argument in support of this is that the terrorist acts were not prevented. None of those involved in the terrorist attack that took place in October this year has been caught, and of these attacks are investigated in a similar way, the terrorists will continue with these bloody, terrible crimes in the future.”

Serenko said that it was “unreal” that the Russian security authorities did not manage to detect the terrorists who brought large amounts of explosives into Volgograd.

“It is unreal to bring 10 kilograms of explosives, and then another four kilograms…. bypassing all cordons. Those who prepare these operations, who prepare the attacks, do not just act boldly but are fearless, extremely tough and cynical. (After) the December 29 terrorist attack on the station, the leaders of almost all Russia’s power structures came here. And those who prepared and conducted the terrorist attack on the station, knew full well that all the forces would come running, that security would be strengthened, and that there would be checks everywhere. That is, the security system would be running at full capacity. And nevertheless, it took less than a day for them to make a new attack.

That is an indication that these people are not just unafraid but that they understand the weakness of law enforcement in the Volgograd region, that they clearly calculate all the disadvantages of the security forces, and therefore they operate successfully.”

Serenko said that the Volgograd security authorities did not understand the logic of the terrorists, in that they were focussed on investigating past attacks rather than preventing new ones.

“For that reason, citizens fear for tomorrow, (and) no one can guarantee that there won’t be fresh attacks. Probably some one among the leadership of the regional power structures will be removed, someone will be punished, someone must be held responsible for the dead and wounded in the two attacks. Undoubtedly, at some point those who prepared the attacks will answer for their crimes, but those who were not able to stop (the terror attacks) must be held accountable.”

A retired FSB colonel who worked for a long time in one of the republics of the North Caucasus, and who agreed to speak to KU on condition of anonymity, said that the security forces were weakened in many parts of the Russian Federation, after many experienced agents from the region departed.

That left the FSB not just with a gap in expertise, but also with a loss of intelligence sources in the form of key informants within the North Caucasus.

“In the past 20 or so years the FSB has undergone 11 reorganizations. A lot of FSB operatives with vast experience left. Many of us not only traced the emergence of non-traditional followers of Islam in the North Caucasus republics, but we also had informants in their midst.”


The retired colonel said that at some point, the FSB decided that it did not need operatives with counter-terrorism expertise, so people began to retire.

There are still operatives who know the situation in their assigned region. But the continuity was lost. So with all due respect to the security officers who serve in this difficult time, we must use great caution when talking about their high professionalism.”