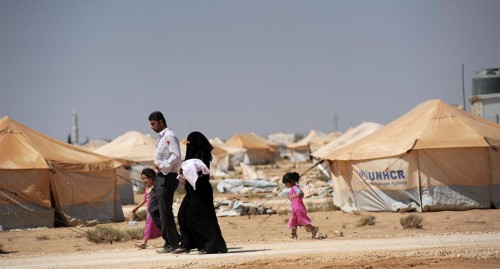 A first-hand account of a trip to Syria as part of a project to install solar-powered lighting in the Za’atari refugee camp, written by Ben Decker & Max Holland for EA:


On a trip to Jordan in December 2013, the initial step of a project to install solar-powered LED lights in poorly-lit areas of the Za’atari camp for Syrian refugees, we learned of the overwhelming extent of the Syrian refugee crisis, a desperate situation which extends far beyond Za’atari.

Over 100,000 Syrians, half under 18, live in Za’atari, which sprawls across a bleak patch of desert just 15 km from the Syrian border. Since it opened on July 29, 2012, Za’atari has received a never-ending human flood of Syrians fleeing the incessant violence of the civil war. 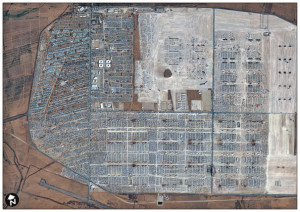 There, refugees face inadequate housing conditions and overcrowding. Men and women stand in line every day for basic food and water supplies. Beyond these hardships, Za’atari is a dangerous place for women and girls. Sexual exploitation is widespread, with camp residents catching several so-called “marriage brokers” who infiltrated the camp posing as workers.

Women say that men regularly come to the poorly-lit communal kitchens to sexually harass them. There are also reports that the camp’s unlit latrines are hotbeds of prostitution and sexual assault, with women saying they are too scared to use them at night. We hoped that our project, run in conjunction with Oxfam, would help alleviate at least some of these issues.

While we first thought that a simple crowdfunding campaign and trip to Jordan would enable us to fulfill our mission, during our short stay in the Hashemite Kingdom we learned just how complicated and difficult the situation in Za’atari and beyond is.

Amid clouds of cigarette smoke, glasses of whiskey, and one too many plates of knaffe, we spoke with Jordanian businessman and international aid workers to get a better understanding of life in the camp.

WHERE DOES THE AID GO? (HINT: NOT SO MUCH TO THE REFUGEES)

Osama Qassem, the Jordanian shipping agent who will arrange the logistics for bringing the solar-powered lights to Za’atari, is cynical about aid supplies to the refugee camp (the lights, should arrive at the camp in the coming days).

“Lots of companies claim to deliver aid to Zaatari, but much of it has turned into a black market of goods no longer intended for refugees,” says Qassem. “People often will choose to turn a better profit by selling on the black market, rather than delivering goods to their rightful recipients,” Qassem complains.

Despite his cynicism about aid deliveries, Qassem admits that Jordan is stretched to breaking point by the influx of Syrians fleeing the conflict. “The Kingdom can only do so much to help the refugees,” he tells us, inviting us to: “Take a minute and imagine if a million refugees showed up in California – how would you deal with it? Crime hasn’t increased much, but more importantly, our country is running out of resources doing what we can.”

Qassem concludes by saying that Jordanians cannot do much more.

“There is going to come a time when we simply cannot do anything more to support the refugees without suffering ourselves,” he warns.

NO LEGAL STATUS, NO ID — “SURVIVAL SEX” AS AN ESCAPE ROUTE

While Amman has offered sanctuary to over 100,000 Syrians, as Qassem pointed out, Syrian refugees face extreme difficulties once in Jordan. Amman has not ratified the Geneva Refugee Convention, so Syrian refugees in Jordan have a confusing and often contradictory legal status. 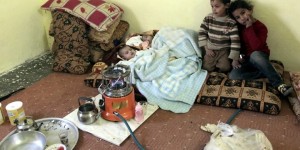 Moreover, Jordanian military officials routinely confiscate official identity cards from refugees entering Za’atari. Because of their lack of legal status, refugees are considered guests in Jordan. With a blurry legal status and no official form of ID, Syrians are trapped in Za’atari.

Syrians can only leave Za’atari if they manage to convince a Jordanian citizen, over 30, married, and employed, to vouch for them on the outside.

As a result, many Syrians desperate to get family members out of the camp fall victim to human trafficking. For Syrian girls, this is often the only way to leave Za’atari. Many teenage girls are “married off” to Jordanian nationals — a polite euphemism for the trade in sex trafficking that has sprung up in the camp, where “agents” source Syrian refugee girls to use for sex.

A CAMP ON “LIFE SUPPORT”

After braving our way through Amman’s bleak, but vast city center, we met with Melanie Megevand of the International Rescue Committee (IRC), who spends most of her time in Zaatari. 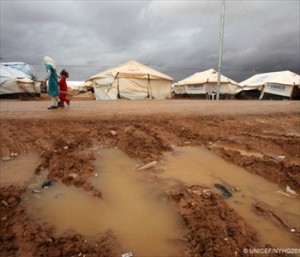 Megevand says the camp is literally “on life support”. In the short time of its existence, Za’atari has transformed into a city, especially since the UNHCR has attempted to implement European-style forms of community governance. The camp is now divided into 12 districts, all of which are governed by three international aid agencies, including the IRC, who coordinate large-scale projects around the camp with JEN, ACTED, Oxfam, Save the Children, UNICEF, and IRD>

According to Megevand, the IRC is running a large-scale safety audit to improve safety conditions for refugees. Energy costs are a large concern, running at least $500,000 a month. Many refugees are connecting illegally to electricity outlets, a very risky practice. In the past week, Megevand says, there have been three fire-related deaths when a gas canister used for heating spontaneously combusted, and it will unlikely be the last incident of the season.

While new governance system may well help improve infrastructure and service delivery, simply not enough is being done for the refugees on an everyday level, which is one of the main reasons for the high prevalence of sexual and domestic violence.

The first step, which we are hoping to implement alongside Save the Children and the IRD, is to install solar-powered lighting fixtures in highly vulnerable areas of the camp.

BEYOND ZA’ATARI: LIVING ILLEGALLY IN JORDAN

While we hope our effort to light up parts of Za’atari will help improve life for some refugees, we know that the camp is only part of the Syrian refugee story. Around 1.5 million Syrians live in Jordan, around 80% of whom are illegal “guests”. These refugees have an incredibly difficult time finding places to live or ways to make enough money to survive. Just like in Za’atari, girls are “married off” to pay debts while boys often work dangerous and illegal jobs to help keep families fed and sheltered.

International aid organizations find it hard to help Syrian refugees outside of Za’atari, because they simply don’t know where the refugees are.

The mass influx of refugees has had an impact on the Jordanian economy, as our shipping agent Qassem noted. While Damascus businesses have continued to run their companies out of Amman, locals say these Syrian entrepreneurs are beginning to have a profoundly negative effect on the precarious Jordanian job market. Jordanians complain that the influx of Syrians has made resources like cars, housing, electricity, and gas scarce, because there is no way to cope with the sudden population growth.

On Tuesday, a Jordanian official told the Chinese Xinhua news agency that, “Jordan has been repeatedly calling for a political solution to address the crisis in Syria to help restore the country’s stability and security. We were negatively affected by the crisis, which placed pressure on the education, health, energy, water, security and infrastructure in the Kingdom.”

The official said Jordan needs more international aid to cope with the influx of refugees.

Ben Decker is a Masters student at Tel Aviv University, where he is focusing on culture as a form of civic dissidence in Iran. Ben is also a blogger, DJ, and web consultant, and his writings have been featured in EA WorldView and the Jerusalem Post. He recently began interning for Bustan: The Middle East Book Review, and is proud to consider himself an active participant in the effort to support coexistence in the Middle Eastern surfing community. Previously, he worked in Washington DC for Tavaana, a multi-platform capacity building program for Iranian civic leaders, which was funded by the State Department, after graduating with a B.A. summa cum laude in Middle Eastern Studies from Emory University in 2009.

Max Holland is a registered attorney in the State of Georgia. His greatest passion is finding meaningful ways to contribute to marginalized societies. Though formal education has played an important role — he holds a law degree and an undergraduate degree in international conflict resolution — his experiences outside of institutional education cultivated his need to give back. He attempts to utilize the privileges and access he has gathered to better the everyday lives of those underprivileged communities. While in college, Max lived with rural villagers in Thailand, who faced cultural and financial crises due to globalization. After graduating, Max taught English and worked in Korea with a human rights attorney translating reports from Korean to English. The combination of his education and experience has shaped and guided his desire to contribute something that has a tangible effect on actual people’s lives. Max will spend 2014 in Uberlandia, Brazil as a Fulbright Grantee.

Read more about the authors’ project in Za’atari here.