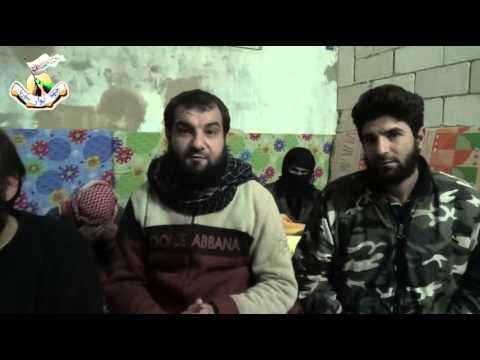 Earlier this week, a group of prisoners freed from an Islamic State of Iraq and as-Sham jail appeared on video to talk of their experiences.

Thanks to activist Iyad el-Baghdadi and the Daily Star of Beirut, we have an English translation of some of the testimony:

They executed prisoners right in front of our eyes.

They tortured [a prisoner] to admit he’s an infidel. On the 5th day he said yes. So they killed him.”

Two Kurds were tortured and accused of being members of the [Kurdish insurgency] PKK. They never confessed…. One of them was shot right in front of us; they put a pistol to his head and shot him. The guy couldn’t even speak Arabic.

They took a 15-year-old boy, and accused him of being a shabbih [pro-Assad militiaman]. They pulled out his fingernails, and got him to finally confess to raping three women. [He was] a 15-year-old, only this tall.

[A prisoner] said he was wounded in his hand. So they electrocuted his hand with a cattle prod.

Five minutes before we were freed, they had us lined in a cave and were about to execute us all.

We were saved at the last minute; they were preparing their grenades.