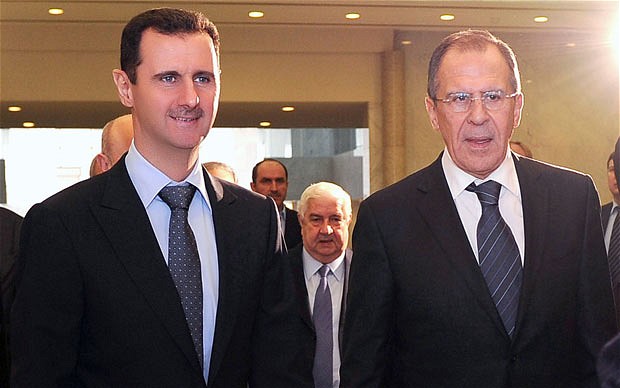 Amid increasing doubts over whether the long-awaited Geneva II peace conference will go ahead on January 22, Moscow broke its silence on the matter on Thursday with criticism of the opposition Syrian National Coalition.

The Russian Foreign Ministry slammed the Coalition for postponing, until January 17, a final answer on whether it will attend the conference.

“We regret… that one of the movements of the Syrian opposition continues to furnish its participation in the Geneva II international conference with preconditions, thus trying to prejudge its outcome,” the Ministry said in a statement published on its website Thursday.

The Foreign Ministry also commented on the re-election of Coalition leader Ahmad al-Jarba and then reiterated its line:

In Moscow, we remain convinced that there is no alternative to a political and diplomatic settlement of the Syrian crisis. Its launch without preconditions on January 22 at the International Forum in Montreux in Switzerland aims to provide a speedy end to all violence, bloodshed, and suffering of the people of Syria.

At the same time, the recognized basis for broad, inter-Syrian dialogue is the Geneva communiqué of June 30, 2012, supported by the consensus resolution No. 2118 of the UN Security Council. In fact, the international conference on Syria, in which Syrians themselves will come to a mutual agreement on the fundamental issues of the future of their country, is done to enact this communiqué.

First, why did the Foreign Ministry wait until Thursday to react to moves made by the Coalition in its Istanbul conference on Monday-Tuesday?

Second, why did Foreign Minister Sergei Lavrov react via a general statement, put out quietly by his Information and Press Department, rather than making a more forceful comment in a press conference or in a media interview?

Lavrov has been remarkably silent on the subject of the Geneva II conference since an interview on December 24. At that time, Lavrov stressed that the newly-formed insurgent bloc Islamic Front was “connected to Al Qa’eda”, and called on “moderate” insurgents to join with Assad’s forces to expel “international terrorists” from Syria.

Developments in Syria since then have overtaken Moscow’s carefully-crafted strategy. With the Islamic Front and other insurgent groups uniting to expel or at least disable the Islamic State of Iraq and ash-Sham, Russia’s line that “Al Qa’eda extremists” from outside Syria have taken over the insurgency is no longer viable. The argument that moderate insurgents and Assad’s forces should unite against the foreign interlopers is also obsolete — although that line was never a feasible proposition anyway.

Despite Moscow’s rhetoric that the Syrian conflict can only have a political and diplomatic solution, events on the ground in Syria have shown that the conflict will be settled militarily.

And because it is increasingly unlikely that the Geneva II conference will go ahead, let alone with any significant participation from the Syrian opposition, Russia’s silence on the matter may be a recognition and a fear that it is being pushed to the sidelines.