Syria: A Russian-Speaking Jihadi On Fighting Between ISIS & Insurgents – “The Jihad Continues, We Don’t Care Which Infidels We Fight” 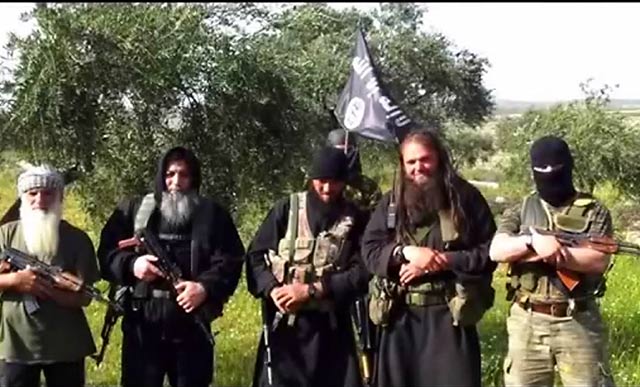 An account on the Russian social networking site VK has published a claimed letter from a Chechen jihadi in Syria, who gives his perspective on the recent clashes between the Islamic State of Iraq and ash-Sham and opposing insurgent factions in Aleppo Province. The jihadi is named as Abu Hanif.

The VK account, SHAM TODAY, appears to be connected to a YouTube account, Dnevnik Shama (Diary of Sham), that publishes videos of Chechen fighters in Syria.

We have translated the text of the letter below, which claims to be from a Russian-speaking fighter in the jamaat of Abu Khalifa.

The text, which appears to be genuine though it is not possible to ascertain its veracity, suggests that there are several Russian-speaking factions fighting around Aleppo, not all of them ethnic Chechens. The names of those listed as killed in battle suggest these fighters were Kazakhs, ethnic Russians, Astrakhans, and Kumyks from north Dagestan.

I do not know how (or if at all) the Russian media are covering the events taking place at the moment in Syria, which has been liberated from Bashar [al-Assad] but not from the infidels, but I am more than sure that if you do get any information it will certainly be distorted. Therefore, I am going to try to paint a brief picture of what is happening, at least in that part of the country where I am.

In case anyone missed it, a few groups from the infidel Free Syrian Army simultaneously began a war with ISIS wherever there are Mujahideen. It all started when the FSA started to fire at cars carrying mujahideen, whenever they drove up to their checkpoints.

Having reported that the road is blocked (and making sure that the car contains representatives of ISIS), these scum brothers suggested that the cars drive up a bypass road, which actually takes you to a dead end. When the brothers came back, the infidel scum met them with heavy fire. And so, on the first day of the conflict a large number of brothers became martyrs. This evening in just two bases that I visited, I saw more than 20 bodies of the brothers.

After a short period of time, the brothers organized themselves, and began attacking the positions of the apostates. Yesterday a huge military base that had been previously occupied by infidels from the FSA was taken in the vicinity of the town Atareb. Those infidels who were still alive ran away and shot at those brothers who had been held captive in this base, sending indiscriminate machine gun fire at the brothers and not even making ​​sure that the guys the idiots had fired at were dead. Among the prisoners who got shot at there are martyrs and there are survivors, praise Allah. At the time of writing, the brothers began to storm the city of Atareb where the infidels are entrenched… They’ve been joined by the cowards who fled from the battlefield after the defeat of the military base I wrote about above.

On the day that the conflict began, the ISIS headquarters in Atareb was bombed and the Emir of the town was taken captive, and we found out later that he’d been killed. We also found out that these morons took captive about 10 sisters and their kids, the wives of the mujahideen.

Since the conflict began, we’ve had 5 martyrs in our jamaat (may Allah admit them to the gardens of Paradise): Abu Muslim Kazakh, Abu Vakas Rusi, Abu Muaz Rusi from Astrakhan, Abidin Kumyk, Abu Muaz Aguvi from Dagestan, and more than 10 wounded. The Kazakh brothers have 6 martyrs.

At the moment, the battle for Atareb that started at night is still going on.

As far as I know, there are also clashes with the infidels in Anadan and Kafr Hamra, where there are a huge number of Russian-speaking foreign fighters, in Aleppo, in the suburbs of Damascus and many other places.

Thank Allah, what is happening is going on in a large enclosed area.

From the outset it was clear that nothing good would come from the infidel scum in our rear. So finally all their masks came off. Because until now among the Mujahideen were those who doubted that the FSA were infidels. So it’s good that Allah gave us the chance to clean this infidel dirt off of our liberated territory!

There is no doubt that what is happening now is a well-planned campaign, although a lot of people won’t stop calling it a spontaneous event. There are a lot of facts that point to it: 1. All of yesterday, the FSA satellite channels were buzzing with reports that their valiant soldiers had cleansed the country from ISIS, that there were no so-called terrorists anymore; the news ticker kept on talking about an ultimatum, that all the ISIS mujahideen had to give up their weapons within 24 hours to the FSA. These translations didn’t just make us laugh, they also made us feel sorry that most of the editors of these news channels were missing a brain.

2. The shooting at the cars of the mujahideen went on simultaneously in various parts of the country, by representatives of different FSA groups.

3. Right at the start of the conflict, all groups of the FSA got involved, including the strongest ones like the Islamic Front (a group that was formed recently, and which contains a huge number of small and big FSA brigades including Ahrar ash-Sham, who brought them away from Islam. Please don’t mix them up with Jabhat al-Nusra!), who said their aim is to make an Islamic democracy. When those who treacherously shot at the brothers were rebuffed and started to wind up with a lot of corpses from among their own, many of the groups rushed to say they had nothing to do with the matter (especially the big groups).

4. There has been talk that something like this would happen for about a month now. And all this is dressed up like, for a democratic future for Syria, it’s more important to fight international terrorism than it is to fight Bashar.

Praise Allah, the jihad is going on no matter what, and it makes no difference to the mujahideen which infidels they fight, our aim is the raise the word of Allah and annihilate the infidels, wherever they come from. May Allah help us and we hope for His mercy.

(Featured image: North Caucasian fighters in Syria, taken last year. The man with the long, black beard second from right is Abu Banat, a native of Dagestan who came to Syria last year and joined a group of Russian-speaking fighters, that did not include Chechens. Abu Banat then announced he was waging jihad in an Aleppo village, where he and his group angered the locals by being rude and aggressive to them. Abu Banat overstayed his welcome yet more when he married a local Syrian woman, then insulted her. In April 2013, Abu Banat then captured two Christian priests and executed them. By June, his group disbanded, each accusing the other of being takfiris. Abu Banat fled Syria and is probably back in Dagestan.)