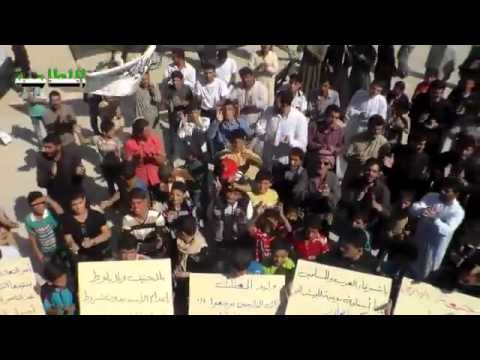 Syrians in opposition-controlled areas across the country took to the streets Friday afternoon for this week’s Friday protests. This week’s theme is “Shukran, Turkia” —“Thank You, Turkey” — a defiant nod to Ankara’s support for the insurgency and its staunch criticism of Syrian President Bashar Al Assad.

Protesters in the Idlib village of Kafranbel drove the point home further, setting Turkey’s support for the Syrian opposition against President Bashar Al Assad with a huge banner accusing US President Barack Obama of being a “virus”.

The “Thank You Turkey” theme appears particularly apt, given Assad’s interview on Friday with Turkey’s Halk TV — which is close to Turkey’s opposition Republican People’s Party — in which the Syrian President warned that Turkey will pay a “heavy price” for its support of the insurgency and accusing it of harboring “terrorists” along its border.

“It is not possible to put terrorism in your pocket and use it as a card, because it is like a scorpion which won’t hesitate to sting you at the first opportunity…In the near future, these terrorists will have an impact on Turkey and Turkey will pay a heavy price for it,” Assad told the TV channel, according to a transcript.

Assad also told Halk TV that he has not yet made a decision as to whether he will run in Presidential elections next year. The situation on the ground is changing rapidly, Assad said, noting that he would only put himself forward “if Syrians wanted him to.”

The picture will become clearer in the next four to five months, Assad added.

The Syrian President did not refer to the mass protests on Friday, nor to the protest movements that sparked the conflict after the Assad regime cracked down on demonstrators.

A Selection Of Videos Of Friday’s Opposition Protests Across Syria