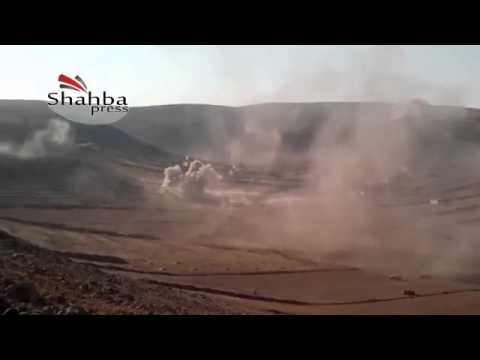 SUMMARY: Over the last 72 hours, we have been reporting on insurgent advances in Daraa Province in southern Syria, with the prospect of the capture of Daraa city.

In the “dynamic stalemate” of the conflict, however, the fight is never one-sided. On Thursday, Syrian forces reportedly took over Khanaser, a key village southeast of Aleppo.

Khanaser is on the main highway linking Aleppo with central Syria. Its capture by the regime opens up the prospect that President Assad’s forces can lift the months-long siege on their areas of Aleppo, Syria’s largest city.

Shelling of Khanaser by the Syrian military:

Regime tanks near the village on Thursday:

However, the situation is far from clear this morning. Fighting continues around the village, and some opposition supporters are insisting that insurgents have reclaimed it.

Jihadist sources on Friday are reporting more clashes between the Kurdish YPG and the Islamic State of Iraq and Ash Sham around the border towns of Afrin and Qastal Jindu in Aleppo Province.

Both Afrin and Qastal Jindu are close to Azaz, in the Syria-Turkish border region, where ISIS fighters are clashing with the Free Syrian Army’s Northern Storm Brigade.

As Assad Warns Turks Over Support Of Insurgency, Demonstrators Across Syria Say, “Thank You, Turkey”

The theme of this week’s Friday protests across Syria is “Thank You, Turkey” — a nod to Ankara’s support for the insurgency and criticism of Syrian President Bashar Al Assad. The protests come as Assad warned Turkey’s Halk TV that Turkey will pay a “heavy price” for its support of the insurgency and accusing it of harboring “terrorists” along its border.

More coverage, and videos of the protests, here: Syria Spotlight: As Assad Warns Ankara Over Support For Insurgents, Syrians Say “Thank You, Turkey”

Video: Friday Protests In Kafranbel — “Obama Acted Like A Virus”

Footage of Friday’s protest in Kafranbel, Idlib. The large banner reads: “Obama Acted Like A Virus That Paralyzed America Financially And Let Russia Win Over USA Politically. What A President!”

The insurgent faction Ahrar al-Sham takes the viewer through the old crossing on the Jordanian border, taken over by opposition fighters earlier this week:

Abo Gamal, who reported from the front lines of the fighting in Daraa Province, was killed by regime shelling on Wednesday, as he followed fierce clashes in his hometown of Tafas.

This morning, we wrote about Russia’s continued strategy of disinformation and delay in Syria, noting that Moscow had continued its line of stigmatizing the Syrian Opposition including by suggesting that it was the insurgency, and not the Assad regime, that was to blame for the August 21 chemical weapons attacks.

This morning, Moscow has ramped up that line, with Interfax citing “Russian diplomatic sources” as saying that a “special group” commanded by Saudi Arabia from Jordanian territory carried out the August 21 attacks.

Jihadist sources including the Russian-language Umma News are reporting on Friday that the Islamic State of Iraq and Ash Sham are fighting both the Free Syrian Army’s Northern Storm Brigade and Kurdish forces (here reported as the “Communist PKK”) around Azaz on the Turkish border.

The same sources report that during the clashes with the Kurds, an Egyptian ISIS fighter named Abu Dujana Al Masry has been killed.

The Syrian National Coalition (SNC) warned on Friday of an impending humanitarian disaster in Houla, Homs.

The SNC said that the Assad regime could be “planning a massacre” in the area and warned, “a humanitarian disaster is unfolding in besieged Houla as Assad forces attempt to take control of the strategic villages Burj Qa’e and Sam’aleel. These two villages constitute Houla’s only lifeline.”

The SNC warned that the regime was taking advantage of what it said is a “continued news blackout” to try to control the villages.

“If Assad succeeds in this attack, it will tighten the siege on more than 90 thousand civilians living in that small area. Committing a massacre in Houla then would be just a matter of time,” the SNC added.

Shelling in Sam’aleel on Thursday:

Footage from Friday is a vivid reminder of the cultural cost of the conflict: regime airstrikes have severely damaged Deir Ezzor’s Othman Ibn Affan Mosque in the old airport area.

Insurgents and activists have repeatedly accused the Assad regime of deliberately targeting the minarets of Sunni mosques in airstrikes.

Fighting continues on Friday in Tafas, Daraa Province — the scene of intense battles over the past days, which has resulted in the deaths of insurgents and two media activists.

The regime has launched airstrikes on the city:

Insurgents preparing to target regime forces stationed in the town’s high school with a BMP:

Insurgents targeting a regime barracks — the site of the fiercest fighting — with a machine gun mounted on a truck:

Jaish Al Islam [“Army of Islam”], the newly-formed merger of 50 Islamist groups operating mostly around Damascus, issued a statement on Friday denying “false accusations” that it says have been leveled against it.

JAI say that since the merger there has been a flood of reports about discord between “mujahideen factions”, and that this will undermine the newly-formed group in its fight against the Assad regime. The purpose of the false statements is to prolong the regime’s survival, JAI said.

A telling admission from the Minister of Industry to Parliament on Thursday, even as ministers gave reassurances of “measures to alleviate the impact of the crisis”….

Kamal Eddin Touma said damage to the industrial sector had cost SYP 100 billion (more than $885 million at official rates) and losses in the private sector were SYP 230 billion (almost $2.04 billion).

Touma said most industry in Aleppo was damaged and “dysfunctional”.

The Local Coordination Committees claim 57 people were killed on Thursday, including 15 in Damascus and its suburbs.

The Violations Documentation Center puts the number of dead at 74,777 since the conflict began in March 2011, an increase of 102 from Thursday. Of the dead, 55,846 are civilians, a rise of 60 from yesterday.