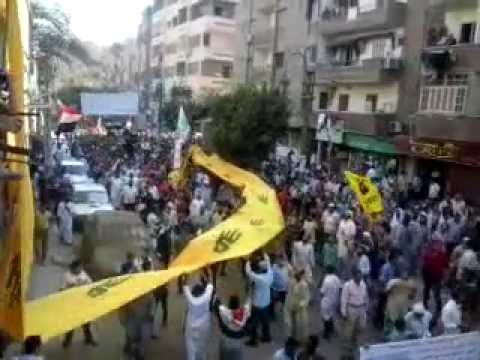 Medical sources said one protester died from a gunshot wound in clashes in the center of the capital. Fourteen people have been injured.

Later clashes in the suburb of Zeitoun in western Cairo left three dead and 23 injured.

Security forces fired tear gas at the demonstrators in Qasr Al-Eini Street off Cairo’s heavily-barricaded Tahrir Square, the symbolic center of protests since the 2011 revolution against the Mubarak regime.

A witness claimed an Egyptian army vehicle fired live rounds in the direction of Muslim Brotherhood supporters. Onlookers threw rocks at the demonstrators, who hurled them back.

Security forces blocked the streets around the square.

In the east of the capital, the rally moved amid tight security towards Rabaa Al-Adawiya Square, where the main sit-in for deposed President Morsi was violently dispersed in August.

Protesters also attempted to march on the Defence Ministry headquarters but were cut off by security vehicles blockading the streets leading to the building.

A rally in the city of Minya:

Demonstrations were also reported in the cities of Alexandria and Suez and in the Sharqiya and Gharbiya Governorates.