Syria Round-Up, Oct 7: Assad “You Paint a Picture of Me as Man Who Kills His People” 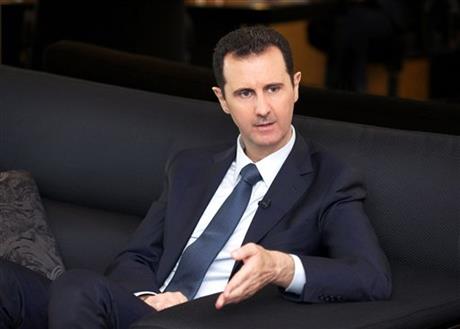 SUMMARY: In an interview with Der Spiegel, President Assad has denounced the insurgency while defending his regime:

We did not use chemical weapons. This is a misstatement. So is the picture you paint of me as a man who kills his own people.

Turkish Prime Minister Recep Tayyip Erdogan has criticized US Secretary of State John Kerry’s praise of President Assad for co-operating with the dismantling of chemical weapons.

“How could we praise someone who has killed 110,000 people? It does not matter if these people were killed with chemical weapons or with other weapons; in the end they were killed,” Erdogan said.

I think it is extremely significant that yesterday, Sunday, within a week of the resolution being passed, some chemical weapons were already being destroyed.

I think it’s also credit to the Assad regime for complying rapidly, as they are supposed to.

In a pointed gesture, France and Saudi Arabia agreed on Monday on the need to strengthen the Syrian opposition and insurgency.

Our approach to the situation is identical. We believe in strengthening the Syrian National Coalition and the general staff of General Idriss [head of the Supreme Military Council]

“The National Coalition should be strong and respected…We support the Coalition on the military level, as well as the humanitarian and political levels,” Le Drian said.

The French Minister declined to give details about military assistance, however, and he said France “hopes that the Geneva [peace] conference would succeed because there will be no military solution in Syria”.

An EA correspondent, contrasting the announcements with the American retreat from assistance for the insurgency, summarizes sharply, “Frustrated US allies show President Obama and Secretary of State Kerry a bold middle finger.”

Footage from Monday shows panic in the immediate aftermath of a regime airstrike on Hamoryah, in the Damascus countryside. Activists say that at least 20 civilians died in the airstrike and many more were injured.

The airstrike comes as the Assad regime continues its offensive against opposition-controlled areas of the Damascus suburbs, in a bid to reclaim control over key areas surrounding the capital.

Some readers may find the images in the video disturbing.

As insurgents on Monday continued to press the regime in Tafas, Daraa Province, with attacks on a regime barracks in the area, regime forces retaliated with airstrikes on the town:

The battle for the barracks has continued for over a week, with many insurgent deaths — and the deaths of two media activists including the prominent Abdelnasser Abo Gamal.

Russia’s Deputy Foreign Minister, Gennady Gatilov, has discussed humanitarian cooperation in Syria with the President of the The International Committee of the Red Cross (ICRC), Peter Maurer, according to Russia’s Foreign Ministry website.

The talks come after Maurer urged the US and Russia last month to address obstacles to delivering aid in Syria.

Activists say that the Red Cross and Red Crescent have experienced difficulties in getting aid to opposition-controlled areas of Syria for several reasons, including regime-imposed sieges and the refusal or reluctance of the international agencies to cooperate with local civil society organizations.

Another video of the weekend protests in the town of Azaz, near the Turkish border, against the occupation of the Islamic State of Iraq and as-Sham — ISI fighters fires guns to disperse the crowd:

Regime artillery continues to bombard the West Ghouta town of Moadamiyyat Ash Sham — the site of one of the August 21 chemical attacks — as ground troops try to invade the town from the north. Activists report that so far, the FSA has repelled the invasion attempts.

Russian Foreign Minister Sergei Lavrov has put out yet another date for the long-delayed international peace discussions in Geneva, commenting on Monday that Moscow and Washington both expect to hold the conference in November.

Claimed footage of a rally in Azaz, supporting the Free Syrian Army and its Northern Storm Brigade in front of the headquarters of the Islamic State of Iraq and as-Sham — ISIS pushed Northern Storm out of the town, near the Turkish border, last month:

Speaking alongside Russian Foreign Minister Sergei Lavrov at a summit in Indonesia, US Secretary of State John Kerry has praised Damascus for co-operating in the handover and destruction of its chemical weapons stocks:

I think it’s extremely significant that yesterday, Sunday, within a week of the [United Nations] resolution being passed, some chemical weapons were being destroyed.

The Local Coordination Committees claim 85 people were killed on Sunday, including 24 in Damascus and its suburbs, 18 in Hama Province, 14 in Homs Province, 12 in Aleppo Province, and 11 in Daraa Province.

The Violations Documentation Center records that 75,029 people have been killed since the start of the conflict in March 2011, an increase of 94 from Sunday. Of the dead, 55,982 are civilians.