Iran Round-Up, Oct 7: Rouhani Keeps Supreme Leader on His Side 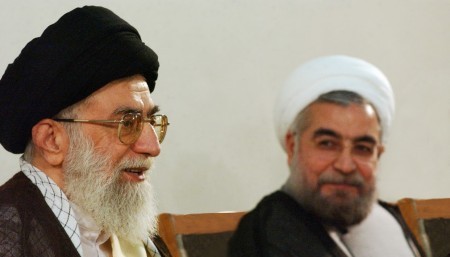 SUMMARY: In his latest tactical move for his policy of engagement, President Rouhani has expressed gratitude to the Supreme Leader for public support of Rouhani’s trip to New York and the United Nations.

At a Cabinet meeting on Sunday, Rouhani thanked Ayatollah Khamenei and assured, “In its moving forward, the administration will tread based on national interests and the Leader’s guidelines.”

On Saturday, the Supreme Leader negotiated between Rouhani’s pursuit of discussions with the US and other powers, including on the nuclear issue, and the opposition of the Revolutionary Guards.

Khamenei said “We support the government’s diplomatic drive…because we trust the administration”; however, he added, “However, some of the things that happened during the New York trip were not appropriate, because we believe the US government is untrustworthy, arrogant and irrational, and one that reneges on its promises,”

Rouhani reassured that he will maintain Iran’s core demands, saying that his Government will “defend the nuclear rights of the Iranian nation with all its power and will not spare any effort to remove cruel sanctions” led by the US.

Mousavi and Karroubi — both candidates in the disputed 2009 Presidential election — and Mousavi’s wife Rahnavard have been detained since February 2011.

The Central Bank has confirmed that the annual rate of inflation exceeded 40% on most essential items for August/September.

Health care was 43% more expensive and transport 45%. Only communications and education had increases of less than 15%.

Last month, the social media services were freed, only to be restricted within 24 hours. Reports varied as to whether the brief shift was because of a “technical glitch”, or because the Rouhani Government was testing the limits of censorship.

President Rouhani has expressed his commitment to social media. Both he and Foreign Minister Mohammad Javad Zarif have high-profile Twitter accounts, and Zarif is also prominent on Facebook.