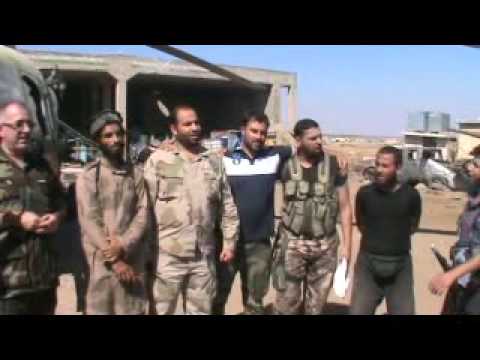 We are still working through the range of effects of Monday’s victory for insurgents with the capture of the regime’s Menagh Airbase, one of the last major regime positions in Aleppo Province.

Of course, the takeover is significant in the military conflict, with the insurgency tightening its hold on northern Syria and the siege of regime areas in Aleppo city. And it has symbolic power, completing a 10-month assault and reversing the — false — narrative of “Assad is winning” after regime gains in southern Syria and Homs in the last two months.

But there’s much more. I asked on Tuesday:

Was it the Free Syrian Army, the “moderate” insurgency backed by the US and the “West”, who had claimed the prize? Or was it brigades outside the FSA — including “extremists” and “Islamists”, in the eyes of Washington and others, who had triumphed?

That question was off the mark, because the answer was either the FSA or the non-FSA brigades — labelled as “jihadist militants” by one analyst.

It was both. And it was both in a co-ordinated operation, involving the FSA and factions from the Islamic State of Iraq and as-Sham to Jabhat al-Nusra to Chechnyan Islamists.

Free Syrian Army and Islamic State of Iraq and as-Sham commanders issue statements after the victory:

We will have more on the significance of that co-ordination later this week. For now, let’s note that it defies last month’s narrative that the FSA is “at war” with the Islamic State of Iraq after the ISI’s killing of an FSA commander in a dispute in northwest Syria. And it certainly complicates the “moderate” v. “Islamist” storyline.

Then there is the lesson of success despite the tensions over foreign support. Amid US reluctance, there was no sign of Western arms supply in the operation. Although those weapons could have been provided covertly, the insurgents appear to have won with weapons from other sources (Saudi Arabia? Qatar? Private suppliers?) with funds from unknown backers — and with stocks taken from regime forces.

So, with an apparent triumph of co-ordination and weapons defying recent assessments of the insurgency, how far can this success extend?

Prime Minister: Visit To Iran Has “Important Outcomes” For Damascus

State media on Wednesday continued to stress that the recent visit by Prime Minister, Dr. Wael al-Halqi to Iran has been important for Damascus in terms of economic and commercial ties between the two countries.

On his return to Damascus on Tuesday, al-Halqi gave a statement in which he made clear, once again, that Iran’s new President, Hassan Rouhani had “stressed commitment to offer all forms of support to the Syrian people and will offer more in this regard”.

Damascus is increasingly reliant on Tehran, which recently extended a $3.6 billion line of credit to the Assad regime.

As insurgents continue a four-day offensive in northern Lattakia Province, State media on Wednesday run a different type of report — a story about olive production.

SANA reports that Lattakia is expected to produce 63,000 tons of olives this season, including 15,000 tons for oil extraction.

The news — while ignoring the insurgent offensive in the province — is not so rosy, however. SANA note that last season’s olive production was 170,000 tons of olives, 40,000 tons of which were for oil extraction. SANA also add that the price of olive oil prices have skyrocketed, citing the Head of Secretariat at the Agriculture Directorate, Zuhir Akkari,as blaming dealers for buying oil from citizens to export it or store it for resale at higher prices or for smuggling to Turkey.

It is the fourth day of the major insurgent offensive in northern Lattakia Province in western Syria, with claims of villages captured and an advance to within several miles of President Assad’s ancestral home in Qaradaha.

Insurgents moving through a village:

A Free Syrian Army storming a regime observation point in the mountains:

Footage from the aftermath of the insurgent capture of the Menagh Airbase near Aleppo shows the Fatah Brigade using a damaged regime helicopter as a minibus:

Claimed footage from Wednesday of the Northern Storm Brigade — the Free Syrian Army brigade whose fighters played a key role in the capture of the regime’s Menagh Airbase near Aleppo — celebrated with a military parade.

Claim: Saudi Arabia Offer to Russia To Separate From Assad

Back from a summer break to find a provocative claim — possibly from the opposition Syrian National Coalition — that Saudi Arabia has offered Russia economic incentives including a major arms deal and a pledge not to challenge Russian gas sales if Moscow scales back support for President Assad.

“Syrian opposition sources close to Saudi Arabia” — a description which could fit the Coalition leadership — said the deal was set out by Saudi head of intelligence, Prince Bandar bin Sultan, at a meeting with Russian President Vladimir Putin in Moscow last week.

The sources asserted that Prince Bandar offered to buy up to $15 billion of Russian weapons, while assuring that Gulf gas would not threaten Russia’s position as a main supplier to Europe.

In return, Moscow would agree not to block any future United Nations Security Council Resolution.

In a 17-minute propaganda video, the Islamist faction Jabhat al-Nusra advertises its training of recruits:

The Russian-language site FiSyria, linked to the Army of Immigrants and Helpers, a group that appears to recruit foreign fighters to the Syrian insurgency and which says it is led by Omar as-Shishani (‘Omar the Chechen’) has posted these videos showing the operation to overrun the base and the airbase after its capture on its website:

Local insurgents in Latakia, the home province of President Bashar al-Assad, have iftar on Tuesday — as others join them in a captured tank. The front line is only around 10 km (six miles) from Qardaha, Assad’s ancestral village and the burial place of his father, Hafez al-Assad. The capture of Qardaha would be a major prize for insurgents, and a major psychological blow for the regime.

Footage from Monday purports to show insurgents from the Islamic State of Iraq and As-Sham using grad rockets to target Menagh Airbase. A question that remains open is where ISIS is obtaining its weapons.

This video, posted on Tuesday night, claims to show the Islamic State of Iraq and As-Sham suicide bomber who carried out the attack at Menagh Airbase on Monday morning making his last statement before the operation.

After proclaiming on Tuesday that regime forces had repelled a “terrorist” attack on Menagh Airbase — well after it was captured by insurgents — State news agency SANA is silent this morning in its daily round-up, “Army Inflicts Heavy Losses Upon Terrorists In Several Areas”.

Instead, the website proclaims advance in the Bab Houd section of Homs and features the Tuesday car bombing in Jaramana, south of Damascus, that killed at least 18 people.

No details have been given of discussion, although SANA’s reference to “economic, commercial and developmental domains” is an important clue — Iran recently extended a $3.6 billion line of credit to Damascus.

The Local Coordination Committees claim 126 people were killed on Tuesday, including 50 in Damascus and its suburbs and 31 in Aleppo Province.

The Violations Documentation Center puts the number of dead at 68,773 since the start of the conflict, a rise of 121 since Tuesday. Of these, 52,099 are civilians, an increase of 51 from yesterday.