Syria Analysis: Which Insurgents Captured Menagh Airbase — & Who Led Them? 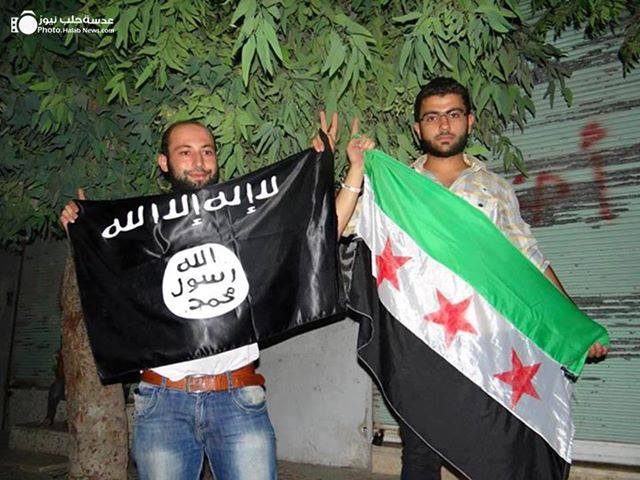 With news reports on Wednesday leading with statements like “Islamists Seize Airbase Near Aleppo” — even as the Free Syrian Army and the Syrian National Coalition congratulated FSA fighters for their capture of the Menagh Airbase — we look at which groups were involved in the assault.

Did Islamists Lead The Operation?

Islamists, particularly from the Islamic State of Iraq and as-Sham, were heavily involved in the assault on the airbase — activists associated with them posting large quantities of footage showing their role.

However, the biggest clue as to their relationship with the Free Syrian Army may be in this video, posted on Monday immediately after Menagh fell. In it, the FSA head of the Aleppo Military Council, Abdul Jabbar al-Oqaidi, leads a press statement praising his fighters for taking the base. Standing next to him is ISIS Emir Abu Jandal, whom al-Oqaidi invites to give a statement.

The footage indicates that not only are there links between ISIS and FSA fighters on the ground, but that there was a high level of coordination and collaboration in the operation to besiege and take the airbase:

Activists named Captain Ahmad Eissa al-Gazaly as the FSA commander who led the storming of Menagh:


The FSA’s Northern Storm Brigade played a major role in the assault on the Airbase and in the months-long siege that preceded it.

In this footage, posted on Monday, Northern Storm Brigade commander Adnan Siadi talks about the victory in the Airbase:

A short documentary by Journeyman Pictures gives more information about Northern Storm and their role. Many, if not most, of the brigade’s men appear to be local Syrians — they say they are fighting for “God, the land and their families”:


Liwa al-Tawhid (the Al Tawhid Brigade) have been fighting at Menagh for some months. This video shows the brigade using Russian Konkurs anti-tank missiles to bombard armored vehicles:

Islamic State of Iraq and As-Sham

ISIS carried out the suicide bombings that started the assault on Menagh:

Claimed footage of insurgents from the Islamic State of Iraq and As-Sham (ISIS) before storming the airbase:

The group was founded in March 2012 after three insurgent groups unified to form a new group, which pledged allegiance to Abu Omar al-Shishani (‘Abu Omar the Chechen’). The group, which mostly operates around Aleppo, has coordinated efforts with other insurgent groups in the past, including with Jabhat al-Nusra.

A Russian-language site linked to the group said that the group, under the command of Omar al-Shishani, participated in the attack, and cited a fighter, Abu Ibrahim, as saying that regime forces had tried to dig in and use heavy equipment against the insurgents, who attacked at that point.