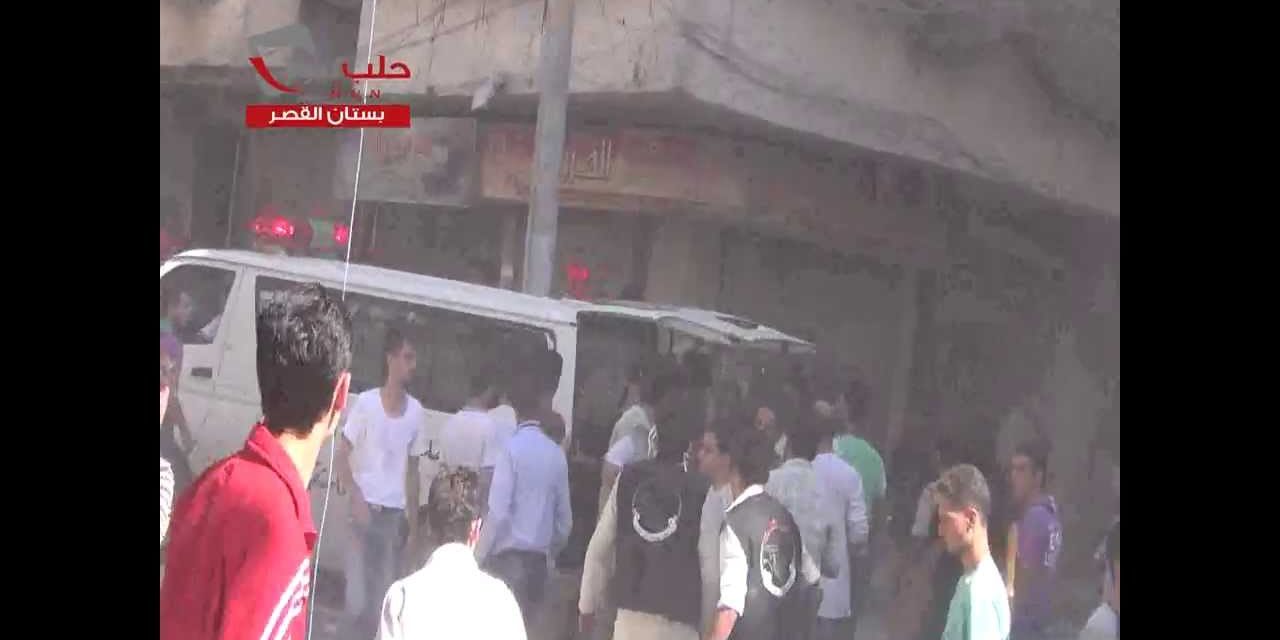 Examining accounts from witnesses and activists, as well as videos, EA’s Joanna Paraszczuk — writing an analysis to be posted this weekend — has noticed a deadly pattern: soon after losing territory or suffering a setback, the Syrian military will pound the area with shells and missiles, with civilians often paying the price.

That pattern is not new. EA’s James Miller had noted it earlier this year, assessing — like Paraszczuk — that the regime, unlikely to operate effectively with ground forces in many places, is more and more reliant on the punishment of air power.

However, Paraszczuk’s study goes farther into detail, from Lattakia in western Syria to sections of Deir Ez Zor — which the regime may be on the verge of losing completely — in the east.

An attack on Bustan al-Qasr in Aleppo on Friday:

And it is not just a question of being unable to regain lost territory. The Syrian military appears to be facing problems in completing even expected objectives — including re-claiming all of Homs. Weeks after the fall of insurgent-held Khalidiya supposedly sounded the death-knell for opposition forces in Homs, the regime has been unable to mobilize ground operations to take over areas — some of which came out defiantly in protest on Friday.

All of this puts the “Assad is winning” narrative, prevalent after the regime’s victory in Qusayr in June, into perspective. It raises the question we posed on Thursday: given that it is the insurgents who made significant advances in recent weeks, is this a “lasting and conclusive shift in the balance of the conflict with the regime” in favor of the opposition?

Perhaps more importantly, will the Syrian military’s retribution bombing intensify, causing more deaths, injuries, and displacement among civilians — who, according to State propaganda, are thanking the regime for protecting them?

The Syrian Coalition on Saturday said that Shahir Al Muaddamani, the head of the Media Office of Daraya’s Local Council, was targeted and killed by Assad’s forces on Friday.

The Coalition said that Muaddamani, 27, “took part in peaceful demonstrations against the rule of the tyrant Assad. He played an important role in unifying media work in the city of Daraya. Al Muaddamani was an administrator of Daraya’s Coordination Committee, and later joined the Local Council of the city. He was recently elected head of the Media Office of Daraya’s Local Council.”

While we have posted this video before of Islamist fighter Abu Jandal Al Masry (“Abu Jandal The Egyptian”) of the Islamic State and Iraq and As-Sham in Menagh Airbase after its capture, this version has English subtitles. Abu Jandal is also mentioned in our report on the capture of the airbase, here.

Insurgents from the FSA’s Liwa Ahrar Souriya are attacking the regime-held Kwaires airbase in Aleppo Province, near the Turkish border, with home-made weapons. 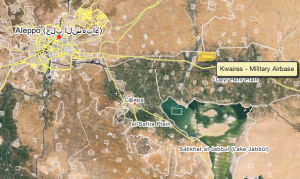 Much media attention has focussed on the involvement of Islamist groups in operations like this in Aleppo, a trend that has placed undue emphasis on the role of these groups while simultaneously minimizing and sidelining the role of the Free Syrian Army in ongoing fighting against key positions.

Liwa Ahrar Souriya were also involved in the fight for Menagh Airbase in Aleppo.

Syrian State media on Saturday reports of an alleged mass killing — which it dubs a “massacre” — of 11 people by insurgents near the Ain al-Ajouz crossroads on al-Hwash-al-Nassira road in Homs countryside. SANA did not say whether those killed were regime troops or militia.

The British-based operation the Syrian Observatory for Human Rights has claimed — without any reliable evidence — that “rebel gunmen had attacked the checkpoint, killing five militia fighters and six civilians, including two women” and that some of those involved were Christians. Though the Observatory felt able to give the gender, religion and military make-up of those reported killed, it did not give any information whatsoever about which insurgent faction it claimed was involved.

The Revolutionary Council in the insurgent-held Aleppo neighborhood of Salah Al Din has handed out free toys to children as part of a campaign to win local hearts and minds.

During Ramadan, the Council erected a tent in the neighborhood, in which local revolutionary, relief associations and media activists gathered todiscuss all issues and activities in insurgent-held areas in Aleppo.

These initiatives are not unusual, though most mainstream media has focussed on events held by Islamist factions, and ignored similar events by more moderate insurgents and by activists. 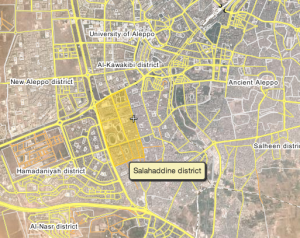 The general commander of Jabhat al-Akrad (Kurdish Front) has said 117 Kurdish villages in a triangle in Aleppo Province are under attack by “Al-Qaeda-linked groups”, i.e. the Islamists faction Jabhat al-Nusra and the Islamic State of Iraq and as-Sham, and several brigades of the Free Syrian Army (FSA).

More footage from Aleppo province shows another dimension of the conflict between the insurgency and the Kurdish PKK, some of whom have been accused of siding with the Assad regime.

Wladimir van Wilgenburg explains some of the background to the conflict in an August 6 story for Al Monitor:

The Free Syrian Army (FSA) says it is only against the Kurdistan Workers Party (PKK) and its affiliates, such as the People’s Defense Units (YPG) and Jabhat al-Akrad. They accuse the PKK of reneging on earlier agreements and of helping President Bashar al-Assad.


This set of videos shows insurgents inspecting homes in Kfar Saghir that have allegedly been bombed by the PKK. The insurgents tell locals that they will protect civilians.

According to Van Wilgenburg, Kafr Saghir is inhabited by Kurds, and it is possible that Kurds from Tel Aran and Tel Hassel fled there, but it is not clear if the village is 100% Kurdish or if other ethnic groups live there.

Here the insurgents are shown distributing aid to the villagers and asking them to inform them if there are any abuses in the village:

Regime: “Martyrdom Is Unparalleled Human Virtue” (As Long As You Die For The Assad Regime)

Zoubi’s warm words will offer little comfort to the families of those civilians who died in the regime airstrikes on Aleppo, Deir Ez Zor and other towns last week however, as he indicated that “martyrdom” is only related to those who die for the regime.

Zoubi spoke at a ceremony honoring the families of martyrs in the town of Kelmakho in Lattakia Province, where he said that martyrs “excelled in loving Syria and defending it”, and “the martyrs who fought valiantly to ensure the homeland’s victory are a blessing upon the land.”

SANA reported that “the people of the town voiced pride in their sons’ sacrifices for the sake of preserving the homeland and its sovereignty, saying that martyrdom is an honor that lights the way towards the future”.

State media on Saturday played up the regime line that Damascus is pushing for participation in an international “peace” conference, but it is the U.S. that is stalling.

SANA cites “an official source at the Foreign and Expatriates Ministry” as saying that Washington is “continuing hiding its real stances, which reject a peaceful solution reached through a dialog among the Syrians at the Geneva II conference”.

The source said the U.S. line that the Syrian government did not want to take part in the conference was “detached from reality”. This position though was “not weird as it comes from an administration that adopted an approach devoid of credibility.”

SANA has the source explain: “Besides arming the Jabhat al-Nusra terrorists in Syria, the USA is distorting the facts regarding the Syrian leadership’s approval on participating in Geneva II conference without preconditions from any side.”

The Local Coordination Committees claim 104 people were killed on Saturday, including 47 in Aleppo Province, 24 in Damascus and its suburbs, and 14 in Daraa Province.

The Violations Documentation Center puts the number of dead at 69,732 since the start of the conflict, a rise of 105 since Friday. Of these, 52,672 are civilians, an increase of 84 from yesterday.