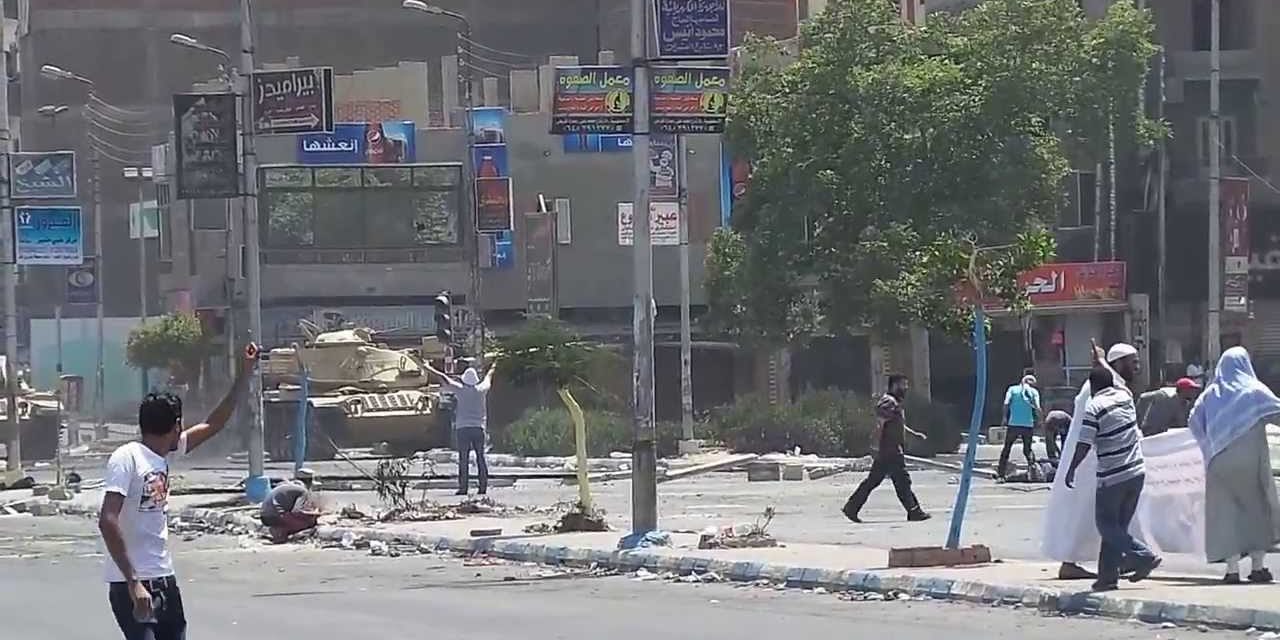 LATEST: Egypt Video — One of Churches Burned This Week

Is Egypt, six weeks after its military coup, now caught up in a near-daily pattern of widespread killing?

More than 100 people were slain on Friday, two days after hundreds lost their lives when security forces moved on sit-ins for deposed President Mohamed Morsi.

Many of the deaths occurred near Ramses Square in Cairo, where anti-regime protesters had gathered. Fighting around a near-by police station — the Egyptian claimed an attempt to storm it — and other clashes put scores in a makeshift morgue in a field hospital.

However, the casualties were not just in the capital. Official declarations — which have been conservative in their presentation of death tolls — said at least 25 people had been killed outside Cairo. The fatalities included eight in Damietta on Egypt’s northern coast and four in Ismailia on the Suez Canal.

Clashes in Ismailia — note the man (at 0:44) shot as he stands defiantly in front of a tank:

The Interior Ministry said more than 1000 people were arrested on Friday amid the fighting, 558 of them in Cairo.

This morning, about 700 anti-regime protesters, including women and children, are in the Fateh Mosque near Ramses Square, surrounded by military and police forces. Some of the demonstrators have spoken of fears of arrest or violence if they leave, or of security forces and plainclothesmen trying to storm the sanctuary.

LiveStream from this morning of the situation inside the mosque:

Egypt Video: One of Churches Burned This Week

Footage from one of the churches burned by protesters in response to clashes with security forces in Egypt — this is in Minya Governorate in Upper Egypt:

Saudi activist Mohammed al-Bajady has returned to prison a few days after he was released following more than two years in detention.

On August 6, al-Bajady — given a four-year sentence in April 2012 — was suddenly freed, but he was not told if this was final or temporary.

Nine days after his release, the relatives of al-Bajady received calls from authorities asking them to bring him to al-Hair Prison.

“Someone said his Eid break was over,” his nephew Samer al-Bajady said on Twitter, referring to the ceremony at the end of Ramadan.

The Saudi Civil and Political Rights Association, of which al-Bajady is a founding member, released a statement condemning what they described as “harassment against its members in the prisons of Saudi Arabia’s Interior Minister.”

Patrick Kingsley of The Guardian has been roughed up by a pro-regime group and detained a second time on Saturday.

hi everyone – sorry for a 2nd scare. am safe now but v briefly: was surrounded by a mob near Ramsis perhaps three hours ago (cont)

#pt: they duffed me up a bit, took my laptop &phone, &drove me several miles. Then two teenagers on 2nd moped managed to get me off (cont)

Kingsley was seized Saturday morning as he reported from Ramses Square and near the Fateh Mosque in Cairo. He was released but told to leave the country immediately. His Twitter account indicated, however, that he returned to the Mosque, where anti-regime protesters have been besieged by security forces and a pro-regime crowd.

Interim Prime Minister Hazem El Beblawi has proposed the legal dissolution of the Muslim Brotherhood, a leading force behind the deposed Morsi Government and in current protests against the July 3 coup.

“It is being studied currently,” said Government spokesman Sherif Shawky. “Reconciliation is there for those who hands are not sullied with blood.”

Founded in 1928, the Brotherhood was officially dissolved by Egypt’s military rulers in 1954, but registered itself as a non-governmental organization in March.

The movement also has a legally-registered political branch, the Freedom and Justice Party, set up after the 2011 overthrow of the Mubarak regime.

The Brotherhood has won all five Parliamentary and Presidential elections that followed the toppling of Mubarak.

Egypt: Government Spokesman — “Egypt Is Not A Weak State”

This is not a political dispute.. We are facing a war waged by forces of extremism – #Egypt's president adviser Hegazi

Nothing will stop us, nothing will even make us lose time on the path of establishing our constitutional foundation – #Egypt presidency

We will combat extremism, we will combat terrorism , not only by security measures, but by rule of law – #Egypt presidency

The Health Ministry has said that 173 people were slain across the country, including 95 in central Cairo, in Friday’s fighting.

The ministry said 1,330 people were wounded, with 596 hurt in the Cairo clashes.

“We reassure all our brothers that we are closely following what is happening, and will not interfere or call for intervention, unless it is the right time, and in the religiously correct stances….We hope that everyone keeps in touch with each others, and does not rush or be late for the right time,” Zawahiri wrote on his Facebook page.

In March 2012, an Egyptian court acquitted Zawahiri and seven others of terrorism charges after a re-trial in an Egyptian military court. Zawahiri, together with Mohamed Islamboli and Abdelaziz el-Gamal had been sentenced to death in absentia in the 1990s in the first trial.

Patrick Kingsley of The Guardian, detained earlier today, has been released but told to leave Egypt immediately:

let go. strict instructions to return to my own country. noted.

The son of the Muslim Brotherhood’s Supreme Guide, Mohamed Badie, was killed on Friday in fighting in Cairo, the Brotherhood’s Freedom and Justice Party has said.

Ammar Badie died of a bullet wound as he protested in Ramses Square.

Mohamed Badie’s whereabouts are unknown. He has been charged with inciting violence and is due to go on trial on August 25.

On Wednesday, the daughter of Brotherhood senior leader Mohamed El Beltagy was among the hundreds killed.

Egypt: The Stand-Off with Security Forces at Fateh Mosque

Journalist Bel Trew reports that a few people were allowed to leave Fateh Mosque near Ramses Square in Cairo, but the scene quickly turned chaotic as pro-regime demonstrators chanted for the military:

People are chanting "peace peace" as women come out of the mosque, believed to be nurses escorted by military

Army are shooting in the air as the people against morsi are protecting the girls, people screaming' sisi sisi" pic.twitter.com/oaAUJso7Nz

People now chanting "the people and the army are one hand" this is a mess. Carrying officer on their soldiers

Patrick Kingsley of The Guardian has been detained as he tried to cover events in Ramses Square and Fateh Mosque in Cairo:

taken to nearby police station. translator with me.

A disturbing tweet from Jonathan Rugman of Britain’s Channel 4 about the besieged Fateh Mosque, filled with anti-protesters, near Ramses Square in Cairo:

One man who has escaped from Ramses Sq mosque in Cairo tells me he counted 72 bodies inside.

Egypt 1st-Hand: The Start of Friday’s Violence in Ramses Square

Journalist Sarah Carr, who was in Ramses Square in Cairo, describes the start of Friday’s clashes that led to dozens being killed:

As [protesters] approached the [nearby] police station, a small group of plain-clothed citizens standing with a couple of armed policemen visibly stiffened and began moving about. Above them, on the police station’s roof, a man carrying a rifle watched silently. More figures emerged next to him, including one man in a black mask and another in a motorbike helmet. Several were armed.

It didn’t take too long for things to deteriorate. Some of the hotheaded youths began chanting polite invectives against the men on the roof but got no reaction. Then the rock-throwing started, and the group of men standing next to the police station grew suddenly and dramatically. Throughout this, the other protesters, some 200 or so, were desperately trying to make the stone-throwers leave, chanting “go back” and forming a human cordon, but their efforts were ignored….

There was an altercation between some of the hotheaded youths and the civilians watching them and then rocks came raining down on the pro-Morsi crowd. The rocks turned into fireworks that turned into gunshots that turned into chaos, in the space of minutes.