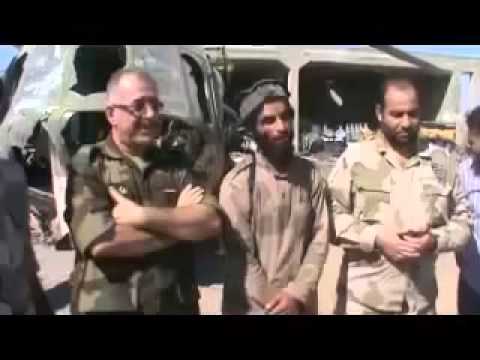 The most important story this week so far has been the insurgency’s capture of the Menagh Airbase near Aleppo after a 10-month siege.

That capture of the well-fortified helicopter base, near the Syrian border with Turkey, tightens the insurgency’s hold on northern Syria and could lead to an advance in Aleppo city.

It has been a difficult story to cover, however, with no journalists on the ground and a need to work through lots of video footage — sometimes confusing, often partial — with various factions claim victories for their units in the airbase. Lack of context, together with some prevailing clichés about the conflict, has led to some serious mis-reporting.

Perhaps the worst example is Wednesday’s article in Britain’s Daily Telegraph, “Foreign Jihadists Behind the Rebel Capture of Aleppo Airport“.

This story, with its dramatic headline, begins with the erroneous declaration that the airbase was captured by “the group Jaish al-Muhajireen wa Ansar — which is made up almost exclusively of foreigners, including Britons, other Europeans and North Americans”. It props up that claim with a sound-bite from Charles Lister of IHS Jane’s Terrorism and Insurgency Centre: “Because [Menagh] is under the control of the Jihadist groups, it shows the importance of their role in the fighting.”

In fact, Jaish al-Muhajireen wa Ansar was one of a number of brigades invovled in the Menagh offensive. But, by elevating it to the brigade that took over the base, the Telegraph ignores the real lesson of the insurgents’ victory.

That lesson is how several factions — including Free Syrian Army brigades as well as other Islamist forces like the Islamic State of Iraq and As-Sham — co-ordinated to carry out the offensive. Even as they have clashed elsewhere in Syria, the Free Syrian Army — particularly the Northern Storm Brigade — and Islamist factions worked together to claim the important prize.

How did this collaboration come about? We know that, in past weeks, there have been tensions between the Northern Storm Brigade and Islamic State of Iraq and as-Sham around the airbase and in Azaz, the town to its north. As late as July 26, clashes were reported between the groups over the occupation of houses near Menagh.

Yet just over a week later, the collaboration between the factions was shown in a series of videos of the final assault on Menagh.

And the co-operation was exalted in an informal “news conference” announcing victory at Menagh on Monday. The head of the Aleppo Military Council, Free Syrian Army Colonel Abdul Jabbar al-Oqaidi, praised fighters for taking the base.

He then turned to the man to his left, ISIS Emir Abu Jandal, and invited him to speak. Abu Jandal then declared that victory had been achieved through the combined efforts of groups within the insurgency, saying this was a significant development in the Syrian revolution.

The Telegraph ignores that video, preferring to feature an image of Abu Omar al-Shishani, the ginger-bearded, Chechnyan-born leader of Jaish al-Muhajireen wa Ansar — the “foreign jihadists” who supposedly commanded the takeover of Menagh.

And, to bolster its narrative of the victorious jihadists, the paper chooses to feature another video of the Free Syrian Army commander al-Oqaidi — to prove that, rather than co-ordinating the attack on Menagh, he was “providing weapons to the Islamists”.

That is a serious distortion. The footage has nothing to do with weapons and Islamists — in the clip, from the start of August, al-Oqaidi is telling the Aleppo “Shura Council” of the dangers of the Kurdish organization PKK.

But that is another complicated story, in which Kurdish militia are fighting insurgents in northern Syria, which requires a great deal of care and examination.

Why do that when you can convert the video into a simpler, scary image for viewers and readers? Indeed, why bother getting the real story of the capture of Menagh Airbase — with its lessons for the complexity of the insurgency — at all?

Update: This footage from Thursday is another illustration of how the capture of Menagh was not as simple as “Jihadists control the base” — here, the Fatah Brigade, a moderate Islamist group allied to the Revolutionary Military Council of Aleppo and which took part in the offensive to capture Menagh, hold Eid prayers in the base, then traveling in a convoy to Tel Rifaat, south of the base and where the brigade was founded, to pay their respects at a cemetery there.