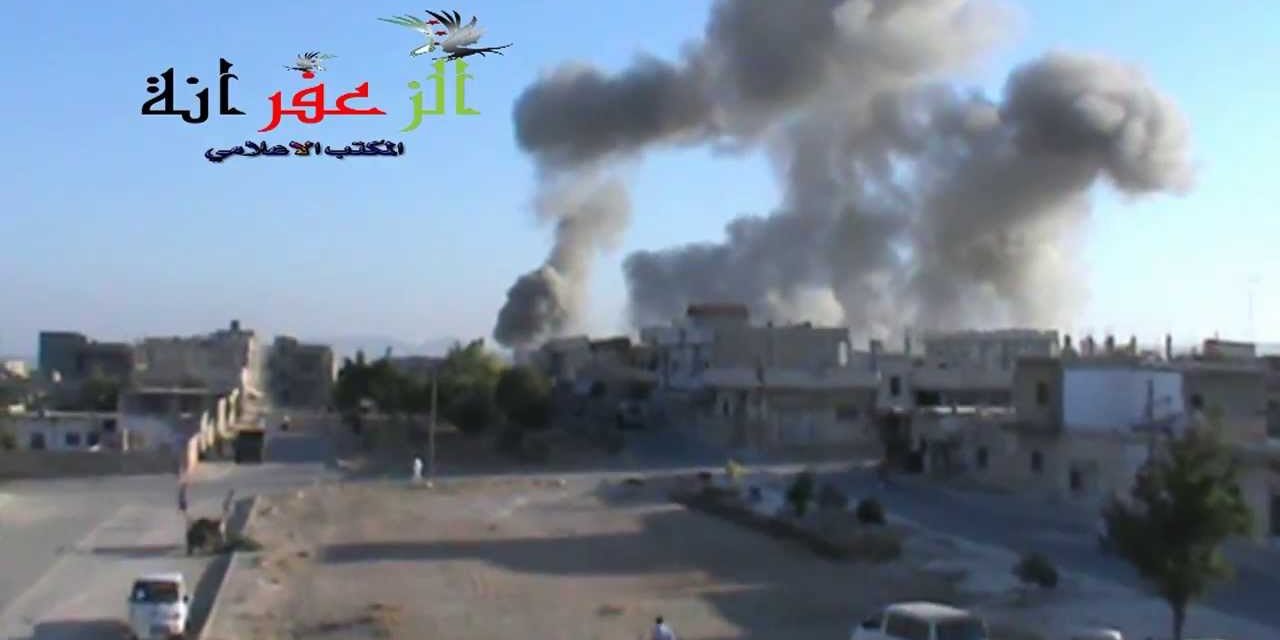 More than 20 videos — almost all of them graphic — and testimony by activists testified to a deadly airstrike on the small town of Zafaranah in northern Homs Province on Thursday.

More than 25 people were killed and dozens were wounded in four regime airstrikes, the first of which hit as residents were going to mosques for prayers on Eid al-Fitr at the end of Ramadan.

Witnesses said the first strike hit a school housing refugees. As residents rushed to the scene to help injured, another airstrike hit a house near a mosque, killing the entire family.

The third airstrike hit the cemetery.

Units of the armed forces destroyed terrorists’ dens and gatherings in al-Za’faraniyeh village in al-Rastan area in the countryside of Homs, killing many of the terrorists, an official source told SANA reporter.

Terrorist Khalid Hilal, leader of the so-called “al-Fath Brigade” was identified among the dead, in addition to terrorists Abdullah Sweis and Ahmad al-Salamoun.

Residents rush towards the scene as smoke rises from the first strike:

The Local Coordination Committees reported 95 people were killed on Thursday but did not count the casualties from Zafaraneh. Of its deaths, 20 martyrs were in Damascus and its suburbs, 17 in Aleppo Province, 15 in Idlib Province, 13 in Homs rovince, 12 in Daraa Province, and 12 in Latakia Province.

The Violations Documentation Center puts the number of dead at 68,967 since the start of the conflict, a rise of 113 since Thursday. Of these, 52,215 are civilians, an increase of 61 from yesterday.

The Syrian Coalition on Friday night praised the Free Syrian Army for its pledge to protect civilians and families along the Syrian Coast.

In a statement on Friday, the FSA said that its operations along the Coast are completely military in nature, and that they would target only security checkpoints, observation posts, military barracks, and pro-regime militia. The FSA said that its role was not to target civilians but to protect them from regime forces.

The FSA also said that its hospitals would admit all wounded people, regardless of whether they are civilians or soldiers, and warned FSA battalions not to take any action that might jeopardize civilians in areas where military operations were taking place.

The FSA has emphasized that it does not intend to harm civilians, including via this video showing an FSA commander in conversation with an Alawite elder.

Free Syrian Army flags at Bustan al-Qasr, Aleppo. A checkpoint in Bustan al-Qasr is the only gateway between rebel-held eastern districts and the city’s western areas, controlled by President Bashar Assad’s troops.

In Al-Qadam, Damascus, as in many other parts of Syria, protests focussed on praising the FSA’s pledge to conduct military operations on the Syrian Coast against regime military targets:

An Islamic State of Iraq and As-Sham flag is on prominent display at Friday’s protests in Binnish, Idlib:

The FSA’s Northern Storm Brigade, one of the brigades involved in this week’s insurgent offensive and takeover of the Menagh Airbase near Aleppo, released this video compiling what they claim is footage of their fighting at the base:

Footage from Thursday’s fighting in Daraa claims to show the FSA’s Shuhada al-Islam Brigade targeting houses inhabited by pro-regime militias in the city:

Footage claiming to show the FSA’s Tawhid Brigade firing rockets on regime targets in the villages of Nubl and Al Zahraa in Aleppo province, both Shia villages in a predominantly Sunni area. Opposition fighters in Aleppo province have claimed that the two villages are home to pro-regime militias that have launched attacks on anti-Assad insurgents.

On first day of Eid al-Fitr on Thursday, children in Talbisah, north of Homs chant slogans in support of the Free Syrian Army and freedom:

Footage: Regime Tanks From In Menagh Airbase Displayed By PYD In Efrin

According to the activist who posted this video, four regime tanks that escaped from the Menagh Airbase were displayed in a parade in Efrin on Thursday, by the PYD (Democratic Union Party), a Kurdish nationalist political party affiliated with the Kurdistan Workers Party (PKK).

The Assad regime, which earlier this month used State media to boast of the support it is receiving from North Korea, has found another Marxist ally — the Indian Communist Party.

SANA reports on Friday that the “Secretary-General of the Communist Party of India (Marxist) Prakash Karat had stressed the solidarity of the Indian people with the Syrian people against the Zionist and imperialist conspiracy”.

The Syrian Ambassador to India, SANA informs us, “thanked the Indian people and the Communist Party of India for their honorable stance”.

The statement says that at dawn on August 4, JAN fighters stormed regime and ‘shabiha’ positions in the village of Barudah and managed to capture it in about 20 minutes, after pro-regime militias fled.

JAN said they managed to capture a large quantity of weapons including cannon, machine guns and 120 mm mortars as well as cars and tanks, before going on to take several other villages in the area including Durin.

JAN said that the most important result of the battle was that the group managed to “take the fight to the nests of the regime in Lattakia” and “weaken its power”.

The statement includes several images of captured weapons, dead regime soldiers and this image, purporting to be a box of Iranian Red Crescent supplies. 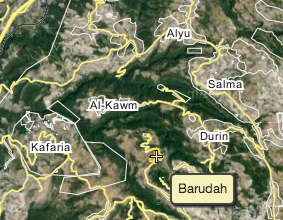 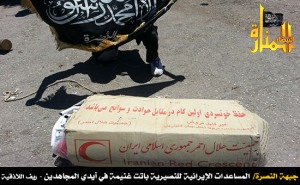 Claimed footage from Thursday of six pro-Assad fighters who say they have defected to the Free Syrian Army in Tsil, Daraa Province. Tsil is south of Nawa, which insurgents captured last month.

Footage posted on Thursday claims to show insurgents from Daraa with a captured pro-Assad fighter — whom they dub a “shabiha” — who they say has confessed to killing civilians. The captive will be tried soon, the insurgents said.

Agricultural production inside Syriais being severely affected by the ongoing conflict, as farmers harvest the fields early fearing that the produce could be devastated at any moment by fires caused by missile strikes.

This year’s harvest is said to be the worst in three decades, while shepherds say livestock are dying of starvation.

Anthony Skinner, a risk analyst with Britain-based Maplecroft, notes that Assad’s ambition of self-sufficiency is failing, forcing him to seek commodities overseas. He adds, “what we’ve seen, of course, has been massive displacement of civilians and farmers, and they’re unable to sow their crops and unable to acquire the fertilizers and seeds and to operate normally.”

“If there is a genuine humanitarian purpose and that can be proven, and it’s cleared by the member state authority, then it can go ahead,” he says. “But at the end of the day, what the Syrian regime should be doing is stopping killing its people and, rather, feeding its people.”

Regime airstrikes on Friday morning between Jobar and Qaboun in Damascus:

State media has — unsurprisingly — picked up on reports in the Russian press of remarks made by Russian Foreign Minister Sergei Lavrov during a dinner with the UN’s Ban Ki Moon this week.

Lavrov said that it was imperative to gather representatives from the Assad regime and the opposition around the same table.

Russian outlet Kommersant asked Lavrov whether Ban Ki Moon did not despair that an international conference would ever take place. Lavrov answered: “He does not despair, because diplomacy is all about getting results. But there will only be a result if everyone plays the same game…. Russia has fulfilled all its obligations, the Syrian regime is ready to send a delegation [to Geneva] and now it’s up to the opposition.”

SANA’s take on the situation was far more positive — the State news agency wrote that Lavrov and Ki Moon had “called for speeding up the preparations for holding the international conference on the crisis in Syria”.

Video: Dialog Between A Sunni Insurgent And Alawite Elder In Lattakia

Activists in Homs have made a “promo” video exploring the destruction of the city since the regime began its major offensive to retake insurgent-held neighborhoods.

On the sixth day of a major insurgent offensive in northern Lattakia Province in western Syria, State news agency SANA tries to present regime success:” Units of the armed forces restored security and stability to al-Blata village, killing and injuring a number of terrorists in several villages of the northern countryside of Lattakia.”

Claimed video shows regime forces promising to take back villages from the insurgents — the man speaking is Mihraç Ural, a former lead of the Turkey’s People’s Liberation Party who has been accused of working with Syrian intelligence services.