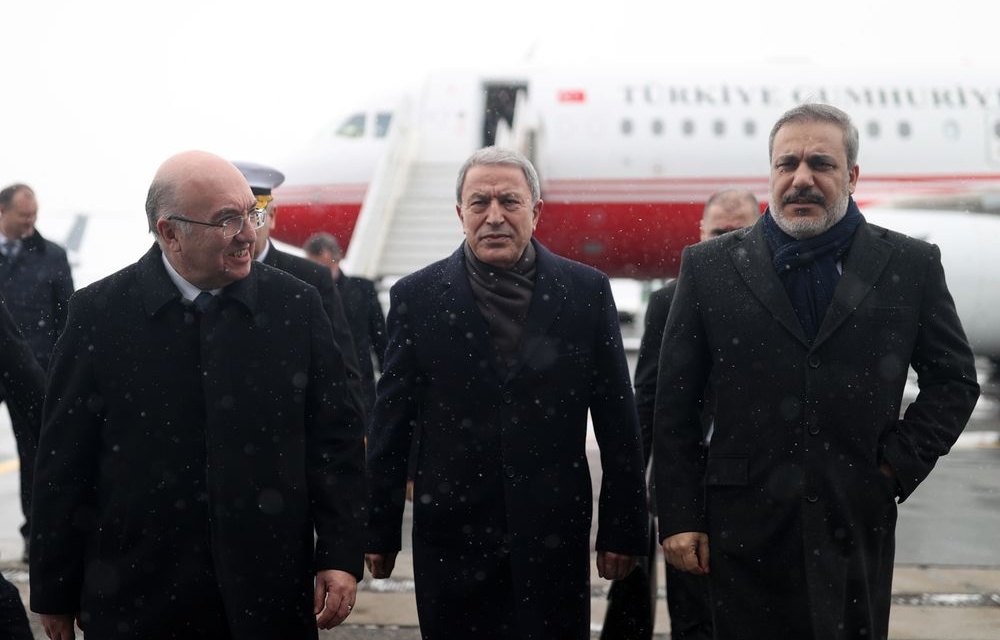 No details of the discussion were offered beyond “cooperation” in “bilateral relations” and the wishes of the Emirati leadership for “more stability, progress and prosperity for Syria and the Syrian people”.

The Foreign Minister also declared the UAE’s keen support for efforts for “a political solution to the Syrian crisis that restores the security, stability and unity of Syria”.

Turkish Foreign Minister Mevlüt Çavuşoğlu met officials from Syria’s anti-Assad opposition in Ankara on Tuesday, a week after the Turkish Defense Minister had talks with his Assad regime counterpart for the first time since Syria’s March 2011 uprising.

No details were given of Çavuşoğlu’s discussions with Syrian Opposition Coalition President Salem al-Meslet, Syrian Negotiations Commission head Badr Jamous, and the Prime Minister of the provisional government, Abdulrahman Mustafa.

Reiterated our support for the Syrian Opposition & the Syrian people in line with the UN Security Council Resolution 2254. pic.twitter.com/6lsRyv3YoE

Earlier in the day, the Foreign Secretary said he expects to meet Assad regime counterpart Faisal Mekdad in Moscow in the second half of January.

“Turkish sources” have offered some detail on talks in Moscow between Turkey’s Defense Minister Hulusi Akar and counterparts from Russia and the Assad regime.

The sources said joint committees were created and will meet in late January in Moscow, then in Ankara and Damascus.

Pursuing the Erdoğan Government’s goal of breaking up the Kurdish-controlled area in northeast Syria, Turkey raised the topic of “how to end” the US-backed, Kurdish-led Syrian Democratic Forces.

Other topics were return of some of the more than 3.6 million Syrian refugees in Turkey “once conditions allow” and establishment of conditions to let Turkey trade via Assad regime areas.

The Syrian Islamic Committee, one of the largest anti-Assad opposition groups in Turkey, said, “Reconciliation with Assad is worse than death.” It added that the right of refugees not to return to an Assad-ruled Syria must be observed.

The Syrian National Committee, also based in Turkey, has yet to comment.

Badran Jiya Kurd, the co-President of the Kurdish Autonomous Administration in northeast Syria, said the Moscow meeting — while helping Turkish President Recep Tayyip Erdoğan pursue re-election — will lead to bad outcomes including a revival of the 1988 Adana Agreement between Turkey and Syria. The Assad regime agreed in that pact to expel members of the Turkish insurgency PKK.

Hulusi Akar and Ali Mahmoud Abbas were joined by Russia’s Sergey Shoygu in Moscow on Thursday.

Turkey’s Erdoğan Government has supported the anti-Assad opposition and its control of parts of northwest Syria. However, President Recep Tayyip Erdoğan — facing re-election in 2023 — has shifted his attention and rhetoric to a possible cross-border attack on Kurdish-controlled territory in northeast Syria.

To enable that attack, Ankara needs to pre-empt any resistance by Russia — the enabler of the Assad regime — or by the US, which supports the Kurdish-led Syrian Democratic Forces.

The Russian Defense Ministry did not refer to the situation in the Kurdish northeast. Instead it declared a discussion on “ways to resolve the Syrian crisis, the problem of refugees, and joint efforts to combat extremist groups in Syria”.

The Ministry said the “constructive” meeting should be followed up “in the interests of further stabilising the situation” in Syria and the region.

The Turkish Defence Ministry issued a similar statement about the “constructive atmosphere”. The Assad regime’s Defense Ministry said the meeting, which included heads of intelligence, was “positive”.

In mid-December, Erdoğan indicated that he could meet with Bashar al-Assad after Defense and Foreign ministers met: “We want to take a step as Syria, Turkey, and Russia.”