A Perpetual Limbo for Millions of Venezuelan Migrants 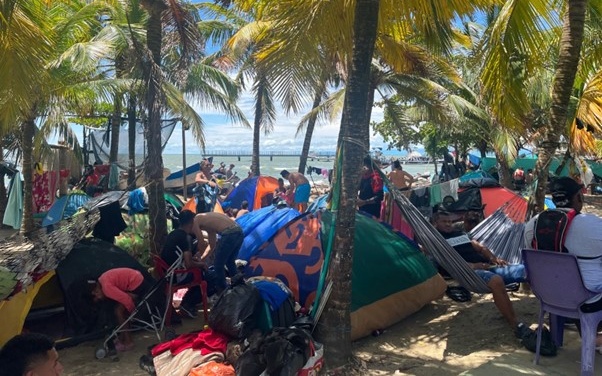 Forty-five days of walking. Five years without seeing his family. Three days of not eating.

This is the life of Abraham José Gonzáles. And there are thousands of other Venezuelans like him who are stranded on the beach of Necoclí, a Colombian coastal town.

The migrants camp year-round on the unpaved streets near the dock, waiting to continue their route through the Darien Gap. Their common goal: to cross the US border in search of a better future and the so-called American Dream.

The backpacks, with the few personal items they could bring for their new lives, are piled up near the camping tents. Children play among each other in the ocean, oblivious to the reality of the trip upon which they and their families are about to embark. Palm trees hold up the hammocks used for rest from the strong sun, as the hopeful wait for days or even weeks for a boat ride.

That ride which will take them to the closest town to the 5,000 square km (1,930 square mile) Darien jungle that separates the border between Colombia and Panama. Once there, their goal is to follow a route through Central America to the Mexican-US border. 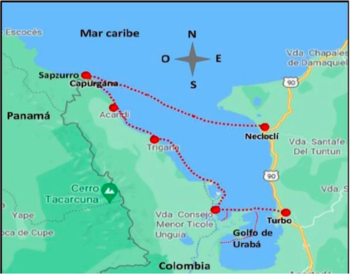 Venezuela’s authoritarian regime is a legacy of socialist President Hugo Chávez, who held power from 1999 until his death in 2013. In April of that year, Nicolás Maduro was first elected and has held office ever since.

Even though Venezuela has the largest amount of oil reserves in the world and is rich in other natural resources, the country has been affected by socio-economic crises throughout the Maduro years. Medicine and food shortages, hyperinflation, power cuts, and an overall lack of basic services have been compounded by the effects of US sanctions.

NGOs have accused Maduro’s regime of persecuting and imprisoning opponents, using security forces and armed groups for indiscriminate violence, carrying out extrajudicial executions and forced disappearances, holding trials of civilians in military courts, and torturing and repressing detainees and demonstrators. The International Criminal Court is conducting ongoing investigations into the regime’s alleged crimes against humanity.

But Maduro remains President. The challenge to his rule by the US-backed opposition, which raised the prospect of a change in government in 2019, has receded. With no other options, millions have fled the country seeking security and livelihoods. 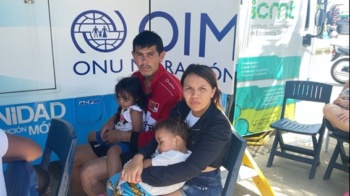 A Small Colombian Town and the Jungle

To cross the Darien Gap, many of the migrants take a 1 1/2-hour boat trip across the Gulf of Urabá between the Colombian towns of Necoclí and Capurganá, at the edge of the Darien jungle.

The 5,000 square km (1,930 square mile) humid jungle and its dense vegetation are home to wild and poisonous animals. Its rivers can turn violent in a heartbeat. Kidnappings, thefts, and encounters with armed groups like the Clan del Golfo are threats. Many of those who embark on this journey do not make it out of the jungle.

Still they try. Frederick Duarte, an 18-year-old barber, had lived in the Colombian capital, Bogotá, for more than a year. He left to give his mother and nephews in Venezuela a future. “I would like to talk to Joe Biden and ask him to welcome me and all of us who are here”, he jokes.

Though the migrants try not to lose hope, their disillusionment is evident. In late October, the Biden Administration said it would parole up to 24,000 Venezuelans who have a financial sponsor in the United States, but then said it would expel others to Mexico.

People use the sea to wash away days’ sweat of stress and uncertainty. Mothers breastfeed their babies in the few empty corners they can find. Children run from tent to tent, as parents line up in front of police trucks to receive small boxes of milk.

Yeribell San is the mother of Estiven, 7, and Esneider, 5, who is disabled. She sold all her belongings to make this trip, seeking a cure for Esneider, who has seizures and dysplasia in his hip. But now she is considering a return to the Colombian city of Barranquilla.

On the contrary, Yolber Eduardo, a 23-year-old, is determined. He promises, “I will cross the Darien Gap with God’s favor. I’ll cross it no matter what.” 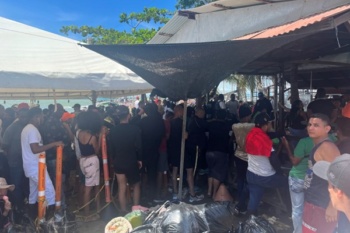 In 2021, around 133,000 people made the crossing through the Darien Gap. Many were from outside South America, such as Haitians, Cubans, Africans, or Indians.

This year the pattern is different. Panamanian authorities have logged 211.355 irregular migrants — 148,285 of them are Venezuelans. Additionally, 32.500 out of those who have crossed in the past 10 months are children and teenagers, half of them under 5 years of age, according to UNICEF.

But many of the Venezuelans say they cannot find quality of life in neighboring countries, just as the barriers to their further movement are raised. The Biden Administration’s tougher line is accompanied by Panamanian authorities who are now denying access to irregular migrants. Thousands of migrants are now stranded throughout Central and South America.

The situation is unlikely to improve. Unlike the European Union, which is pursuing bloc-wide decisions amid the Ukrainian refugee crisis, Latin America has not established a regional response over the millions of Venezuelans. Instead, each country has imposed restrictions on an ad hoc basis. Many Venezuelans are deported, face xenophobia, and have difficulty accessing health and education services or obtaining the legal status allowing them to work. 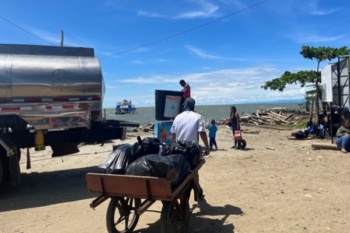 In March, as Europe took in millions of Ukrainians, Chilean President Gabriel Boric suggested immigration quotas. There was no follow-up.

Six months later, the US Agency for International Development announced almost $376 million in additional humanitarian assistance for “people affected by the Venezuela regional crisis”. The funds are on top of a budget of approximately $2.7 billion for development, economic, and health assistance since 2017.

But President Biden’s emphasis has been on negotiations which do not address the situation of the migrants. He has negotiated with Maduro to swap seven Americans imprisoned in Venezuela for two of Maduro’s wife’s nephews in US detention on drug smuggling convictions. American authorities have also spoken of an easing of sanctions in response to concrete actions by the Maduro Government, without linking this to the millions of Venezuelans now outside the country.

There is no prospect of Maduro’s departure from office. So, without multilateral agreements and policies for the welfare of Venezuelans, there will be more who will flee — left to fend for themselves and taking any risk to seek a better future.

We had everything back in Venezuela. We had it all there, but there’s nothing now. Even if I have to swim all the way there [to the US], I will do it.

But I’m scared. I don’t know how to swim. 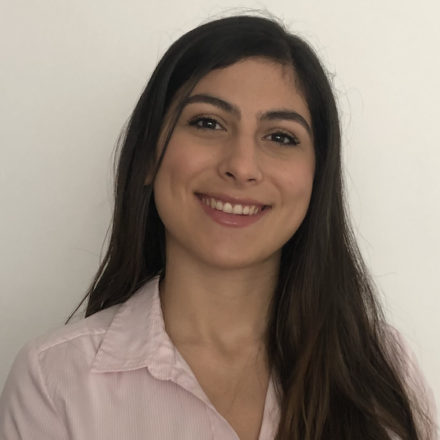 Salomé Saldarriaga Jiménez is a Colombian journalist specializing in coverage of international affairs and human rights coverage. She is currently pursuing an MA in Journalism and International Affairs at University College Dublin.