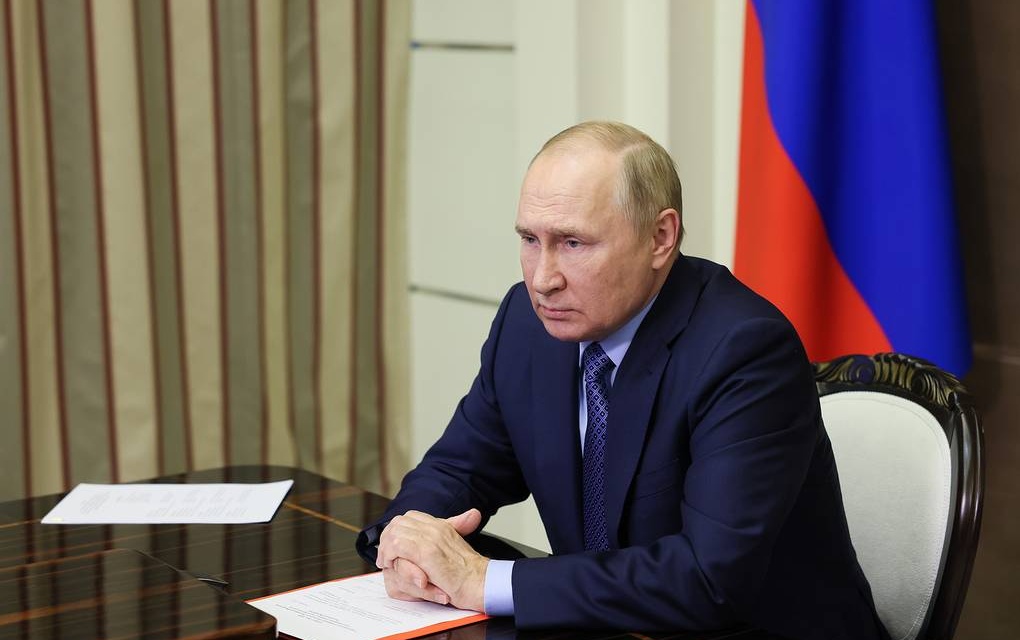 After their meeting in Washington, US President Joe Biden and French counterpart Emmanuel Macron have issued a joint statement condemning “Russia’s illegal war of aggression against Ukraine” and emphasizing that “intentionally targeting civilians and civilian infrastructure constitutes war crimes whose perpetrators must be held accountable”.

Reaffirming continue support for Ukraine’s defense, they pledge “significant resources” for the winter, including “stepping up the delivery of air defense systems and equipment needed to repair Ukraine’s energy grid”.

Macron said at a joint press conference that Kyiv will not be pressured into negotiations by France:

We will never urge the Ukrainians to make a compromise that will never be acceptable to them. They are so brave, and they defend precisely their lives and nations and our principles.

Ukraine President Volodymyr Zelenskiy says 1,319 prisoners have been returned to Ukraine during the Russian invasion.

Zelenskiy spoke after the latest exchange of 50 prisoners on each side with with Russian and Russian proxy forces.

“We will not stop until we get all our people back,” Zelenskiy pledged.

Today’s 50 Ukrainians included defenders of the southeastern port city of Mariupol, which surrendered to the Russians in May after 12 weeks of assault and siege.

Russia told the Red Cross in October that it holds about 6,000 Ukrainian prisoners of war.

Ukraine’s military says some Russian troops have withdrawn from towns on the east bank of the Dnipro River in the Kherson region in southern Ukraine.

Russian forces retreated from Kherson city, on the west side of the Dnipro, on November 9. They crossed the Dnipro, blowing up bridges to hinder Ukrainian pursuit, and reportedly dug in on the east bank. They shelled Ukrainian positions, including Kherson city, killing dozens of civilians and knocking out power.

But Russia has told civilians to leave towns within 15 km (9 miles) of the Dnipro and withdrawn its civilian administration from the city of Nova Kakhovka, near the Kakhovka hydroelectric dam.

The Ukraine military cited a reduction in Russian personnel, mainly newly-mobilized men, in Oleshky. The town is opposite Kherson city, on the far side of a destroyed bridge over the Dnipro.

It also said, “Enemy troops were withdrawn from certain settlements of the Kherson oblast and dispersed in forest strips along the section of the Oleshky-Hola Prystan highway,” a 25-km (15-mile) stretch of road through riverside towns in woods on the east bank.

Switzerland has frozen $7.9 billion in Russian assets over the invasion of Ukraine.

Authorities have also seized 15 Russian-owned properties. Banks are banned from accepting deposits of more than 100,000 Swiss francs ($106,000) from Russian nationals or people or entities based in Russia.

Ukrainian officials have dismissed the deputy chief engineer of the Russian-occupied Zaporizhzhia Nuclear Power Plant, after he was designated by Moscow as the new director of the complex.

Yuriy Chernichuk is accused of collaborating with Russian forces and of treason.

Russian forces abducted the previous Zaporizhzhia director, Ihor Murashov, at the end of September. He was released a few days later, but other senior personnel were also seized.

Ukrainian officials say Russia is trying to transfer the plant to the authority of Moscow’s atomic energy agency Rosatom.

“Multiple US officials” say the Biden administration is considering a large expansion in the training of Ukrainian forces.

Up to 2,500 Ukrainian soldiers a month would receive instruction at a US base in Germany.

During the Russian invasion, the US has trained only a few thousand Ukrainian soldiers, mostly in small groups, on specific weapons systems.

The expanded program will include more sophisticated battlefield tactics, including how to coordinate infantry maneuvers with artillery support — “much more intense and comprehensive” training than Ukraine has been receiving in Poland or the UK.

The Zelenskiy Government requested the expanded program as it looks both to hold off Russian attacks in eastern Ukraine and to build on the advances of a counter-offensive in the east and south this summer and autumn.

A “senior Biden administration official” said, “We won’t get ahead of decisions that haven’t been made, but we are constantly looking for ways to make sure the Ukrainians have the skills they need to succeed on the battlefield as Ukraine defends their territory from Russian aggression.”

Amid a possible shift in Russian opinion against Vladimir Putin’s invasion of Ukraine, a new law expanding the crackdown on “foreign agents” comes into force on Thursday.

The 2012 law, passed after public protests against Putin’s return to the Presidency, required organizations engaging in political activity and receiving funding from abroad to register as foreign agents.

The law has been periodically expanded to restrict free speech and civil society. Thursday’s extension include not only individuals or organizations receiving funding from abroad but also anyone deemed to have “received support and is under foreign influence”.

Kherson city in southern Ukraine, liberated on November 9, is without power this morning after overnight Russian shelling.

There are also outages in the neighboring Zaporizhzia region due to “significant exceeding of electricity consumption”. Power would be restored when “consumption stabilizes”, said the local provider.

In his nightly address to the nation, Zelenskiy said “the situation remains very difficult” in the Kyiv, Vinnytsia, Lviv, Odesa, Khmelnytskyi, and Cherkasy regions.

Energy workers and utility workers, all our services are doing everything to stabilize the system and give people more energy for longer. And I want to emphasize once again: it is very important that people understand when and for what period of time they will be left without electricity.

This is the responsibility of both the energy companies themselves and local authorities. People have a right to know.

The private energy company DTEK in Ukraine said, “Russia has destroyed 40% of the Ukrainian energy system with terrorist missile attacks. Dozens of energy workers were killed and wounded. Electrical engineers are doing everything possible and impossible to stabilise the situation regarding energy supply.”

The US Army has orders six more advanced surface-to-air missile systems for Ukraine.

The Pentagon announced the $1.2 billion contract to Raytheon Technologies on Wednesday.

The SBU searched the homes and offices of Murayev, who is “hiding from justice abroad”, on Wednesday as part of a treason investigation.

Critics say Murayev’s political party Nashi and a TV channel under his control promoted the Kremlin’s interests and narratives before the February 24 invasion.

Weeks before the Russian assault, the UK Foreign Office said Russia was considering Murayev as the head of a puppet regime after the toppling of the Zelenskiy Government.

ORIGINAL ENTRY: Two opinion polls — one an internal survey commissioned by the Kremlin — indicate that Russians are tiring of Vladimir Putin’s nine-month invasion of Ukraine.

The opposition outlet Meduza reported on Wednesday that it had obtained the results of the poll for the Kremlin: 55% favoring peace talks with Ukraine v. 25% wanting a continuation of the war.

Independent polling organization Levada, polling in October, had 57% in favor of negotiations and only 34% preferring pursuit of the invasion.

In July, in the Kremlin’s internal polling, those favoring the invasion had a 57-32 margin over those supporting negotiations with Ukraine.

“Two sources close to the Putin administration” told Meduza that the Kremlin is planning the restrict the release of polling data to the public by the Russian Public Opinion Research Center. One said, “You can get all kinds of results these days — better not to do it at all.” A “political consultant who works frequently with the Kremlin” explained that it is “best not to reveal the dynamics” of the changing attitudes of Russians towards the war.

The shift in opinion has been fed by the cost and chaos of Vladimir Putin’s “partial mobilization” decree of September 21. Russian security forces swept up hundreds of thousands of men for the frontlines in Ukraine; however, the mobilization failed to bolster Russian forces. Instead, the Ukrainians have continued to advance, notably with the liberation of Kherson city in the south on November 9.

Meanwhile, Russian casualties have surged, both in the defeat in the south and in intense fighting in the east. The economy is being squeezed by sanctions, and the elite may be feeling the pressure of international momentum for war crimes investigations.

Fervent pro-Kremlin figures, including the head of the State outlet RT, showed their concern in a broadcast earlier this week.

Meanwhile in Russia: top propagandists and their friends in high places are getting worried about the possibility of losing the war to Ukraine and being tried at the Hague. pic.twitter.com/SfgB1GexQv

But both analysts and “Kremlin insiders” say the changing public attitude is unlikely to push Putin towards the negotiating table.

Denis Volkov, the director of the Levada Center, observes:

Their support [for the invasion] was, from the very start, something they declared with regard to what they perceived as having nothing to do with themselves: “Life goes on — it’s even getting better.”

Now, the risks are greater, and people want to start the talks. Still, the majority of people leave this to the government: “We’d like it, but it’s up to them to decide.”

Kremlin officials said there is little concern about potential mass protests. They explain that the tactic now is “not to raise the temperature, and not to anger people if not necessary”. Russian State media are being directed “not to dwell on the war” and to focus on a “more positive agenda”.