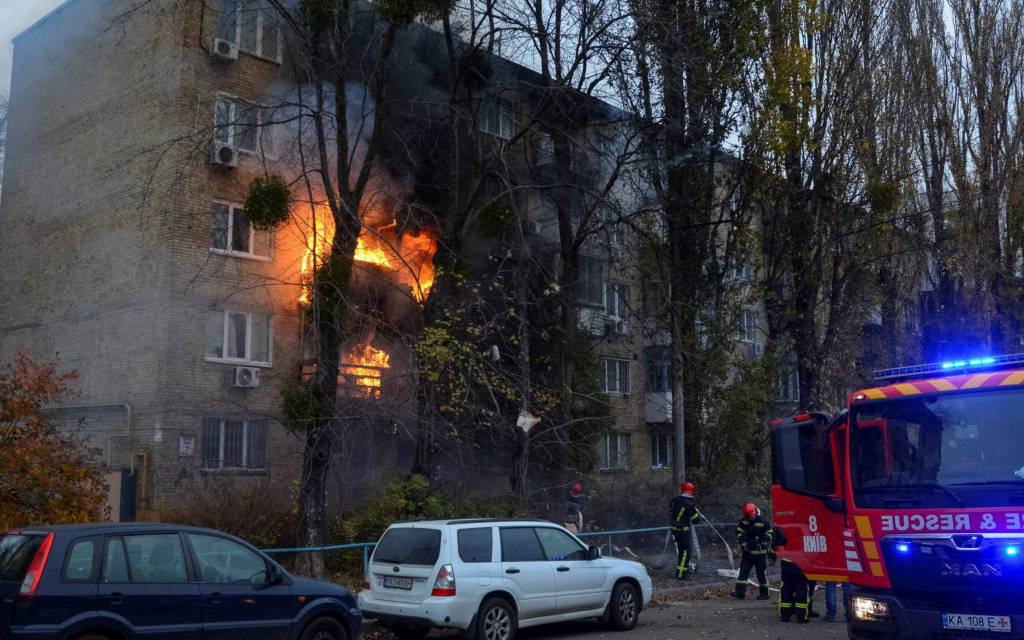 Firefighters battle a fire in a residential building hit by a Russian missile strike on Kyiv, Ukraine November 15, 2022 (Oleksandr Gusev/Reuters)

Ukraine President Volodymyr Zelenskiy has pushed against US, Polish, and NATO officials who say a stray Ukrainian air defense missile fell in Poland: “I have no doubt that it was not our rocket.”

Zelenskiy said he “cannot but trust” reports from the commanders of Ukraine’s armed forces and air force.

The President called for Ukrainian access to the site of the fallen missile in eastern Poland, near the Ukraine border: “Can we not see the final conclusions? Do we have the right to be in the investigation team? Of course.”

Prime Minister Mateusz Morawiecki has told the Polish Parliament that Russia may have deliberately provoked the incident in which a stray Ukrainian air defense missile landed in the country.

We cannot rule out that the shelling of Ukrainian infrastructure near the border was an intentional provocation done in the hope that such a situation could arise.

A US official says the Ukrainian military informed Washington and other allies that it attempted to intercept a Russian missile during the time and near the location of the downed missile in Poland.

Polish Prime Minister Mateusz Morawiecki said, “Materials collected by our services and provided by our allies most probably indicate that the explosion in Przewodów, in eastern Poland, was caused by the shooting down and destruction of a Russian missile.”

Morawiecki added that “there are many indications that one of these missiles fell on Polish territory without any intention on either side” to attack Poland.

Ukrainian investigators have uncovered a Russian “torture room“ in recently-liberated Kherson city where dozens of men were detained, electrocuted, beaten, and sometimes killed.

Police said Russian invadiers took over the juvenile detention center in mid-March and turned it into a prison.

Neighbors and local shopkeepers said they heard screams about six weeks after the Russian takeover. People were taken in with bags on their heads, and some bodies were removed and thrown into the garages behind the center.

Witnesses never saw the faces of the Russians, wearing balaclavas and in black from head to toe, in charge of the
center.

The home of pensioner Vitaliy Serdiuk was raided in late
August. He was held in the detention center for four days, beaten so badly that he is afraid to leave his house.

The Russian proxy deputy governor of the occupied portion of the Kherson region, Ekaterina Gubareva, has been detained by Russian authorities for an “economic crime”.

Russian State media that Gubareva was arrested on Tuesday.

Another deputy governor, Kirill Stremousov, was killed last week in an automobile accident, days before the Russian retreat from Kherson city.

Tuesday’s Russian missile strikes on the Kyiv region have claimed a second vicitim.

The woman was killed in Plesetske village, 45 km (29 miles) southwest of Kyiv city.

NATO Secretary General Jens Stoltenberg has supported the line of Ukrainian MPs that the fall of the Ukrainian air defense missile in Polish territory was caused by Russia’s strikes across Ukraine.

Let me be clear, this is not Ukraine’s fault. Russia bears ultimate responsibility as it continues its illegal war against Ukraine.

The Russian Defense Ministry has used the stray Ukrainian missile in Przewodów in Poland to make the bizarre — and false — claim that all damage in the capital Kyiv on Tuesday was also caused by the Ukrainian military.

No missile strikes were launched at any facilities in Kyiv within high-precision firepower’s massive attack on the facilities located in Ukraine.

All the destructions in the residential quarters of the Ukrainian capital, demonstrated by the Kyiv regime, are the direct consequence of the fall and self-destruction of the air defense missiles launched by Ukrainian forces from the foreign-manufactured air defense systems deployed within the city limits.

Sweden is delivering $287 million in new military aid to Ukraine, including an air defense system and ammunition.

Prime Minister Ulf Kristersson said, “It’s a bigger military support package than all eight previous packages combined. It’s the single largest we’ve done, and we follow exactly the Ukrainian priority list of what they themselves think they need just now.”

Russia had to abandon an assault in the Donetsk region in eastern Ukraine because of inadequate personnel.

A commander of the Russian proxy “Donetsk People’s Republic”, Aleksandr Khodakovsky, said the assault was to be on the Vuhledar area from two directions. However, he and other commanders changed the plan because of the poor training of troops —- possibly part of Vladimir Putin’s mass mobilization from September 21 —- and the inability to contact brigade commanders .

All Russian forces in the area were instead committed to an attack on Pavlivka in Donetsk.

Two US officials have told Associated Press that the missile which landed in Poland was fired by Ukraine’s air defenses.

A NATO source said Joe Biden had been given the information.

Even if it was a Ukrainian missile that was working to intercept Russia it is still as a result of us trying to protect our lives, to try to protect ourselves.

So again, the best response here would be give us the fighter jets, give us the sophisticated air defense protection system. So if it was a mistake or incident, we would not be able to repeat it. Because what is happening right now is us fighting for survival.

Another Ukrainian MP, Lesia Vasylenko, tweets with an image of the damage in Przewodow in Poland:

This is #russia’s fault! If #putin hadn’t gone crazy with a missile shower over #Ukraine yesterday, there would be no hits. In #Kyiv, #Kharkiv or #Przewodow pic.twitter.com/rF7Bc7dRsf

Tymoshenko said utilities are yet to be fully restored itn the Volyn, Zhytomyr, Lviv, Sumy, Ternopil, Kharkiv and Khmelnytskyi regions.

The draft declaration of the G20 summit in Indonesia “deplores in strongest terms Russian aggression against Ukraine”.

It is not clear, beyond the statement’s reference to a “majority”, how many of the 20 nations support the condemnation of Moscow. The draft also says, “There were other views and different assessments of the situation and sanctions.”

The text also said it is essential to uphold international law and the multilateral system that safeguards peace.

Russian Foreign Minister Sergei Lavrov brushed off any significance of the declaration: “the West added the phrase ‘many delegations condemned Russia,’ [but] we noted that alternative views were also outlined.”

Burns’ trip, his second to the Ukrainian capital in less than a month, follows his talks in Turkey with his Russian counterpart Sergey Naryshkin.

A US official said Burns is discussing “the warning he delivered to the head of Russia’s [intelligence service] SVR not to use nuclear weapons and reinforced the US commitment to provide support to Ukraine in its fight against Russian aggression”.

ORIGINAL ENTRY: Reeling from its retreat in the Kherson region in southern Ukraine, Russia renewed missile and rocket attacks across Ukraine, including on the capital Kyiv.

Doing so, the Russians may have hit Poland, with an apparently stray missile crossing the Ukrainian border and killing two workers at a grain-drying factory in the village of Przewodów.

The Polish Ministry of Foreign Affairs confirmed the landing of a “Russian-made” missile. However, Western leaders reacted cautiously, not wishing to inflame the situation and also guarding against the possibility that the missile was a Russian-made S-300 which was part of Ukrainian air defenses.

Poland summoned the Russian Ambassador for an explanation and invoked Article 4 of the NATO treaty — for consultations — rather than Article 5 for actions in self-defense. President Andrzej Duda spoke of a “one-off incident” with “no indications” if a recurrence: “We do not have any conclusive evidence at the moment as to who launched this missile … this is all still under investigation at the moment.”

An emergency meeting of the leaders of the G7 nations — US, France, Germany, Italy, Canada, Japan, and the UK — and of the Netherlands, Spain, and the European Union discussed the situation. Asked afterwards if the missile had come from Russia, US President Joe Biden said:

There is preliminary information that contests that. I don’t want to say that until we completely investigate. But it is unlikely in…its trajectory that it was fired from Russia.

A NATO official tipped off the basis of Biden’s statement, saying an alliance aircraft tracked the missile: “Intel with the radar tracks [of the missile] was provided to Nato and Poland.”

The office of French President Emmanuel Macron added a call for “utmost caution” on any assessment of the origin of the missile, as “many countries have the same kind of weapons, so identifying the type of missile won’t necessarily identify who is behind it”.

The G7 and European leaders summarized in a statement:

We discussed the explosion that took place in the eastern part of Poland near the border with Ukraine. We offer our full support for and assistance with Poland’s ongoing investigation. We agree to remain in close touch to determine appropriate next steps as the investigation proceeds.

Ukraine President Volodymyr Zelenskiy spoke of a “significant escalation” of the conflict.

Russia’s Defense Ministry insisted it was not responsible, portraying reports of the strike on Poland as “a deliberate provocation aimed at escalating the situation”.

Another Assault on Ukrainian Infrastructure and Civilians

Meanwhile, Ukrainians were withstanding another Russian assault trying to break energy infrastructure and civilian morale as well as lives.

Moscow stepped up missile and drone attacks from October 10, following an earlier series of losses in southern and northeastern Ukraine and the serious damage to the Kerch Bridge between Russia and the Russian-occupied Kerch Peninsula.

Ukraine carried out repairs to its power grid, 1/3 of which was knocked out by the assaults, but now faces the task of recovery yet again.

There were power outages in the capital Kyiv and regions from Lviv in the west to Sumy in the north and Kharkiv in the northeast.

At least one person was killed in Kyiv when two residential buildings were struck in the Pechersk district, just north of the Presidential administration building.

In a video on Telegram, President Zelenskiy assured the nation, “I know that the strikes turned off energy in many places … We are working, we will restore everything, we will survive.”

His Chief of Staff, Andriy Yermak, added, “Does anyone seriously think that the Kremlin really wants peace? It wants obedience. But at the end of the day, terrorists always lose.”

The G7 and European leaders gave their support, condemning the “barbaric missile attacks”.