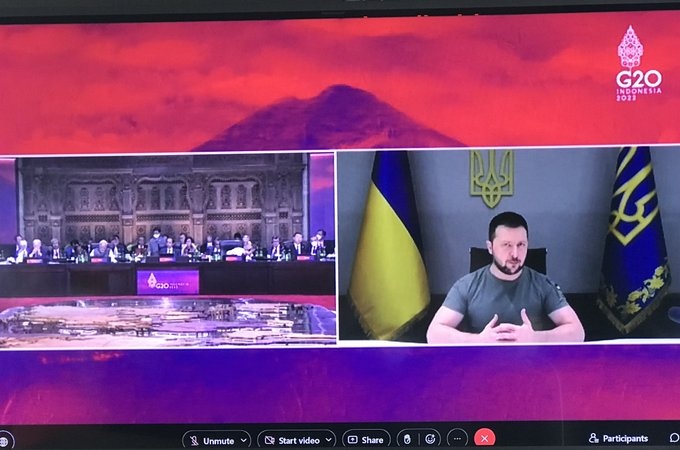 Zelenskiy said in a Telegram video that 85 missiles were launched against Ukraine on Tuesday and a further 20 are expected.

I know that the (missile) strikes turned off energy in many places … We are working, we will restore everything, we will survive.

Half of the capital Kyiv is without power after today’s Russian attacks.

At least two residential buildings were also struck. They are in the Pechersk district, just north of the Presidential administration building.

Four other rockets were intercepted by air defenses.

This video published by Deputy Head of the President’s Office Kyrylo Tymoshenko shows an apartment building on fire following a Russian missile attack on central Kyiv.

According to the official, Russia hit 2 residential buildings on Nov. 14. Rescue operation is underway. pic.twitter.com/uJ0VLmTDXQ

The city of Kryvyi Rih and the Poltava and Cherkasy regions have also been hit.

Reeling from its retreat in the Kherson region in southern Ukraine, Russia has renewed attacks across Ukraine, including on the capital Kyiv.

Dmytro Zhyvytskyi, governor of the Sumy region in northern Ukraine, posted that emergency electricity shutdowns have been introduced as a result of “enemy attacks in Sumy and the region”.

Maksym Kozytskyi, governor of Lviv in the west, wrote:

The enemy struck a critical energy infrastructure facility in the Lviv region. In Lviv, there are problems with electricity supply, interruptions in the work of mobile operators. Stay in shelters! The danger still continues.

Ukraine’s Ambassador to the UN, Sergiy Kyslytsya, said Russia is “spitting in the face” of others at the G20 summit with the latest strikes.

Russia responds to @ZelenskyyUa's powerful speech at #G20 with a new missile attack. Does anyone seriously think that the Kremlin really wants peace? It wants obedience. But at the end of the day, terrorists always lose.

The UN Office of the High Commsioner for Human Rights has confirmed the killing of 6,557 civilians and wounding of 10,074 during the Russian invasion of Ukraine.

Most of the civilian casualties recorded were caused by the use of explosive weapons with wide area effects, including shelling from heavy artillery, multiple launch rocket systems, missiles and airstrikes.

OHCHR believes that the actual figures are considerably higher, as the receipt of information from some locations where intense hostilities have been going on has been delayed and many reports are still pending corroboration.

Matilda Bogner, the head of the OHCHR monitoring mission, also told a press briefing in Geneva of the torture and abuse of Ukrainian prisoners by Russian forces.

The prisoners, interviewed by OHCHR after their release, described dog attacks, electric shocks to the nose and genitals with Tasers and military phones, and sexual violence.

Bogner also said there were “credible allegations” of summary executions of Russian prisoners by Ukrainian forces. POWs reported poor and humiliating conditions of transport and of being packed into trucks or vans naked, with their hands tied behind their backs.

Chinese leader Xi Jinping has implicitly joined the criticism of the Kremlin at the G20 summit, without specifically naming Vladimir Putin.

Xi warned against the “weaponisation” of food and energy. He said he opposed nuclear war in all circumstances, pushing back against Russia’s repeated threats to use tactical nuclear weapons in Ukraine.

India’s Narendra Modi did not go as far, saying it was necessary for a ceasefire and diplomacy. He said the G20 must step up as the UN had failed.

The family of a Russian man have expressed “horror” over his execution, shown on video, by the Russian mercenary Wagner Group.

Yevgeny Nuzhin, 55, was among prisoners recruited by Wagner Group head Yevgeny Prigozhin to fight in eastern Ukraine. But Nuzhin, who was serving a 24-year sentence for a 1999 murder, defected in September.

Captured by the mercenaries, Nuzhin was beaten to death by a sledgehammer as his head was taped to a brick wall.

Prigozhin is using the murder to bolster his growing political and military influence. He compared the “traitor” Nuzhin to Russian elites who disregard the interests of Russia’s people and fly away from the country’s problems in their personal business jets.

A Canadian volunteer has been killed on the battlefield in eastern Ukraine.

Joseph Hildebrand, a 33-year-old farmer and veteran from Saskatchewan, was slain during the defense of Bakhmut in the Donetsk region.

Posting in Telegram after his address to the G20 summit, Ukraine President Volodymyr Zelenskiy has reaffirmed the terms for a settlement of Russia’s invasion.

In a video address to the G20 summit in Indonesia on Tuesday, Zelenskiy said Russia must withdraw its forces and acknowledge the full territorial integrity of Ukraine.

“I am convinced now is the time when the Russian destructive war must and can be ended. It will save thousands of lives,” he said.

Suggesting an international conference to confirm the agreement, the President said Russia must also hand over its assets as reparations and as part of Ukraine’s reconstruction.

Thanking the “G19” — excluding Russia — for “making this clear”, Zelenskiy pointed to Russia’s conversion of the Zaporizhzhia nuclear plant in southern Ukraine into a military base. He said the occupation of Europe’s largest nuclear site had effectively constructed a radioactive bomb that could explode at any moment.

“There are and cannot be any excuses for nuclear blackmail,” he summarized.

Confronting Putin’s “energy war”, with attacks on Ukraine’s infrastructure and threats to cut supplies to Europe, the President said, “If Russia is trying to deprive Ukraine, Europe and all energy consumers in the world of predictability and price stability, the answer to this should be a forced limitation of export prices for Russia.”

And taking on the possibility of a renewed “food war” by the Russian leader, Zelenskiy called for the expansion and indefinite extension of July’s deal lifting Moscow’s blockade of Ukrainian Black Sea ports.

The Kremlin has threatened not to continue the deal, brokered by the UN and Turkey, which will expire on Saturday.

On the eve of the summit, the European Union, US, and UK issued a joint statement knocking back Russia’s line that the deal is threatened by international sanctions, restricting exports of Russian fertilizers and foodstuffs.

The draft communiqué of the G20 summit deplores the economic impact of the Russian invasion and calls for the extension of the deal for Ukraine’s grain exports.

While noting “other views”, it confirms that “most members strongly condemned the war in Ukraine” which is “causing immense human suffering and exacerbating existing fragilities in the global economy”.

The statement, to be officially issued at the summit’s close on Wednesday, says, “Today’s era must not be of war.” It adds that the use or threats to use nuclear weapons are “inadmissible”.

The UN General Assembly supported Kyiv on Monday night with a resolution calling for Russian accountablity, including reparations, for Putin’s invasion.

The measure was approved 94-14, with the remainder of the 193 states abstaining or not voting.

Moscow “must bear the legal consequences of all of its internationally wrongful acts, including making reparation for the injury, including any damage, caused by such acts”, the resolution affirmed.

From the liberation victory in Kherson to the diplomatic victory in New York – the United Nations General Assembly has just given the green light to the creation of a compensation mechanism for Russian crimes in Ukraine. The aggressor will pay for what he did!