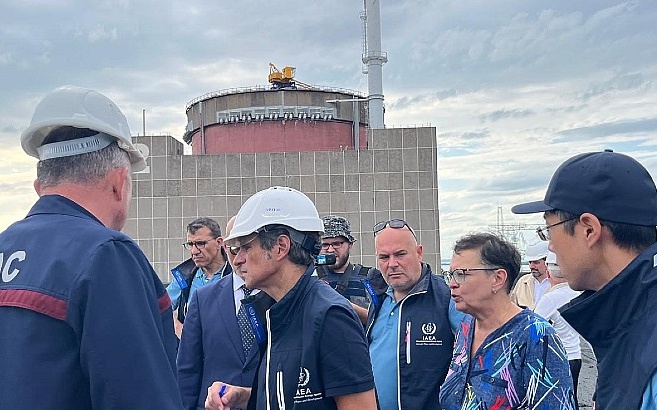 More reports are coming in of Ukraine’s advance in the Kharkiv region in the northeast.

The defense correspondent of the Kyiv Independent, Illia Ponomarenko, tweets:

Something incredible is happening in Kharkiv Oblast.
Yeah, we somewhat underestimated the Ukrainian military’s offensive capability and reserves in that sector.

Lots of videos of Russian POWs (including a lieutenant-colonel) and abandoned Russian positions coming from the Balakliya-Izyum front as Russian military bloggers and analysts remain in doomsday mode. The speed of the Ukrainian advance seems to have stunned everyone.

Russian proxy officials acknowledged on Tuesday that Ukrainian forces have encircled Balakliia, a key town between Kharkiv and Izyum, the staging point for Russia’s offensive in eastern Ukraine (see 0852 GMT).

For the first time, Zeluzhnyi said it was missiles or rockets, rather than sabotage, that knocked out 10 Russian warplanes at Saky airbase last month.

Analysts had split over whether Ukrainian airpower or infiltration of the base had caused the explosions that knocked out much of the air fleet of Russia’s Black Sea navy.

Ukraine’s military has claimed another success in its counter-offensive in the south, demolishing a remaining link for Russia’s occupiers.

Sharing satellite images, the Ukrainian forces wrote, “Photo of the destroyed pontoon bridge near Darivka in the Kherson Region. The Rashists [Russians] used it to cross the Ingulets River….Approximately 250 meters from the crossing, the satellite also recorded a cluster of Russian military equipment and a large number of trenches.”

Russian officials have denounced the IAEA for not putting out Moscow’s line that Ukraine is to blame for attacks on the plant.

Ukraine forces are reportedly advancing in the east and northeast of the country, as well as in the south.

In the northeast, a Russian proxy official has confirmed the Ukrainian attack on the key town of Balakliia in the Kharkiv region.

With 27,000 people, Balakliia is between Kharkiv and Russian-held Izyum, the launching point for Russia’s offensive in the east.

The Ukrainian armed forces concentrated mass fire on the mobile groups of the Donetsk People’s Republic, which had taken up defensive positions in nearby forests.

At this time, Balakliia is in operative encirclement and within the firing range of Ukrainian artillery. All approaches are cut off by fire.

Bezsonov acknowledged that if Ukrainian forces controlled the town, Russian troops in Izyum will be vulnerable on their northwest flank.

In the east, the governor of the Luhansk region, Serhiy Gaidai, said settlements had been retaken. He gave no further details: “A counter-attack is under way and … our forces are enjoying some success. Let’s leave it at that.”

We are advancing and pressing almost along the entire frontline.

In the coming months, we can expect the defeat of the Russian army in the Kherson region on the western bank of the Dnieper and a significant advance of the Armed Forces of Ukraine in the east.

ORIGINAL ENTRY: “Gravely concerned” about the situation at the Russian-occupied Zaporizhzhia nuclear power plant in southern Ukraine, the UN and the International Atomic Energy Agency call for the area to be demilitarized.

The IAEA issued its report on Tuesday, five days after it was finally allowed into the site taken over by Russian forces in early March. The mission summarized:

It is the first time a military conflict has occurred amid the facilities of a large, established nuclear power programme. A nuclear accident can have serious impacts within the country and beyond its borders.

The inspectors did not explicitly call out Russia’s use of the plant as a military base, firing on Ukrainian-held territory across the Dnipro River. However, it implicitly called for a halt to the shelling and to military operations.

Pending the end of the conflict and re-establishment of stable conditions there is an urgent need for interim measures to prevent a nuclear accident arising from physical damage caused by military means.

This can be achieved by the immediate establishment of a nuclear safety and security protection zone.

IAEA head Rafael Grossi amplified, “We are playing with fire and something very, very catastrophic could take place. This is why in our report, we are proposing the establishment of a nuclear safety and security protection zone limited to the perimeter and the plant itself.”

Presenting the report to the UN Security Council, Secretary General António Guterres went further with the call for demilitarization, “Specifically, that will include the commitment by Russian forces to withdraw military personnel and equipment from that perimeter and the commitment by Ukrainian forces not to move in.”

Russia’s Ambassador to the UN, Vassily Nebenzia, did not respond to the appeal.

Ukraine Ambassador Sergiy Kyslytsya said Kyiv will have to look at the details of the IAEA’s recommendations, but supported a demilitarised zone with full Russian withdrawal.

Warning Over Shelling and Staff Conditions

Without attributing responsibility, the IAEA mission said it “closely” witnessed shelling near the complex and observed damage, “The shelling could have impacted safety related structures, systems and components, and could have caused safety significant impacts, loss of lives, and personnel injuries.”

Parroting the Russian Defense Ministry, Nebenzia insisted that Ukraine was shelling the plant and said Russia’s occupiers were protecting it.

Ukrainian staff operating the plant under Russian military occupation are under constant high stress and pressure, especially with the limited staff available. This is not sustainable and could lead to increased human error with implications for nuclear safety.

The UK Ambassador to the UN, Barbara Woodward, told the Security Council the staff were “no longer workers, but hostages being held at gunpoint”.