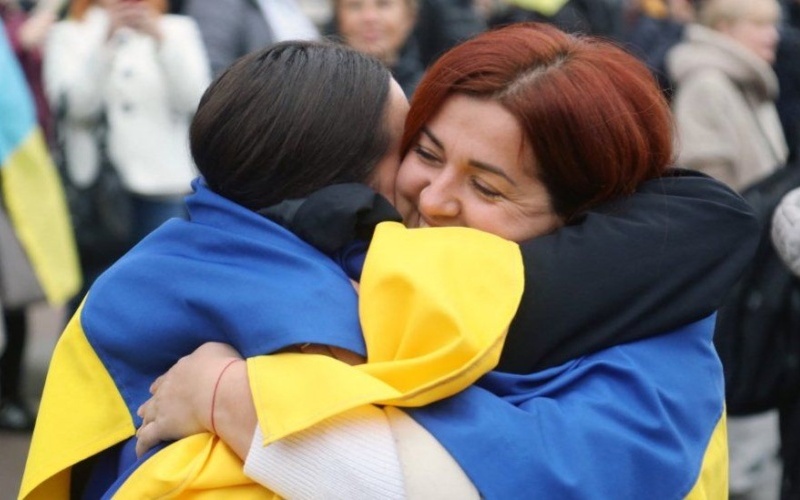 A reunion in southern Ukraine….

The moment a grandmother kneels before her grandson soldier who’d been fighting for Kherson liberation. pic.twitter.com/f6JkBiPmMD

Part of the task of recovery in Kherson city will be to replace what Russian troops looted.

“They took everything with them. They cleared out the stores,” said sales clerk Viktoria Dybovska.

Among the thefts were the animals from the local zoo. Oleksandr Todorchuk, founder of animal rights movement UAnimals, explained, “They have taken most of the zoo’s collection to Crimea: from llamas and wolves to donkeys and squirrels.”

Six civilians were killed across Ukraine on Saturday by Russian shelling, according to the deputy head of President Zelenskiy’s office, Kyrylo Tymoshenko.

Residents of the village of Pravdyne, about 30 miles northwest of Kherson city, have spoken of relief after the end of eight months of Russian occupation.

Svitlana Galak said, “I saw a Ukrainian soldier and I was relieved,” the 43-year-old told AFP. “I had tears of happiness, that finally Ukraine is liberated.”

Pravdyne had about 1,000 residents before the Russian invasion. About 100 remain today amid destroyed and damaged homes and buildings.

Galak’s eldest daughter was killed by Russian bombing. “I will tell you honestly, I was not happy that Russians were here, and my child died. It is hard for me,” she told AFP.

Her husband Viktor was mistreated by the occupiers when he crossed Pravdyne to visit his mother: “The Russians stopped us and forced us to kneel.”

His arms and legs were tied. “Then one of them came and said he was going to put a grenade under me so I wouldn’t run away,” he said.

He told them that his daughter had already been killed and asked, “Why do you want to put a grenade under me? Do you want to kill us all or what? What is your aim? Are you fascists?”

Deputy councillor and school counselor vitlana Striletska said 23 villagers had been killed during the invasion.

She and her husband had to flee the village because she brought in humanitarian aid:

I had to choose between being killed or running away.

We had a small factory to make butter, to make sunflower oil. The Russians destroyed everything because we were helping people.

ORIGINAL ENTRY: Residents of Kherson city in southern Ukraine, liberated on Friday, are now facing the task of recovery.

Before fleeing from Kherson, the [Russian] occupiers destroyed all the critical infrastructure: communications, water, heat, electricity.

The city has a critical shortage, mainly of water. There is currently not enough medicine, not enough bread because it can’t be baked: there is no electricity.

Zelenskiy noted that officials and the military are trying to remove 2,000 mines, trip-wires, and unexploded shells left by the Russians.

Kherson Governor Yaroslav Yanushevych announced security measures including a curfew from 5 p.m. to 8 a.m. and a ban on people from leaving or entering Kherson city.

Ukraine’s Central Bank said it is preparing the system for emergency conditions amid possible blackouts from Russian destruction of energy infrastructure.

But despite the challenges, Ukrainians continued their joyous celebration.

“We’ve become 20 years younger in the last two days,” said Valentyna Buhailova, 61, as a soldier jumped out of a truck and hugged her and her companion Nataliya Porkhunuk, 66, in a hamlet near Kherson city.