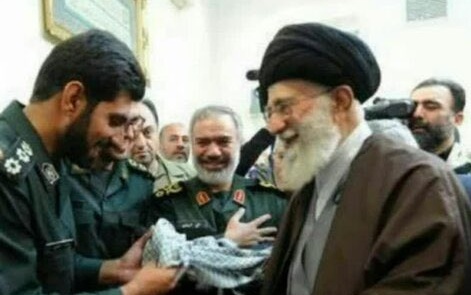 Col. Davoud Jafari, of the Revolutionary Guards Aerospace Branch, in a file photo with the Supreme Leader. Jafari was killed by a roadside IED near Damascus, Syria on November 22, 2022.

Iran has confirmed the killing of a senior Revolutionary Guards officer by an improvised explosive device near Syria’s capital Damascus.

The Revolutionary Guards said in a statement that Col. Davoud Ja’fari of the Aerospace Division died in the roadside explosion.

While Israel has regularly carried out airstrikes on Iranian and Assad regime positions, killings with IEDs are less frequent.

In August, Gen. Abolfazl Alijani of the Guards Ground Force was killed inside Syria. Iranian officials never revealed the circumstances around his death.

In their most significant airstrikes in two months, Israel warplanes have killed at least six Assad regime troops and wounded four.

The regime military said the strikes were on central and coastal regions of Syria early Saturday from the Israeli warplanes flying over the Mediterranean. It gave no further information on the targets in the Latakia, Hama, and Homs regions.

On Sunday, a strike on the Shayrat airbase in Homs Province killed two soldiers and wounded three.

Following standard practice, the Israel Defense Forces made no comment on the operations.

However, a long-time observer of the Syrian conflict says officers are among those killed on Saturday. He added that three troops were killed and 17 wounded last Sunday.

Syria: this morning Israel killed a SAA high-ranking Officer as well as other officers & soldiers during airstrikes on the Coast & Homs province. Those identified so far:
– Lt Colonel from Latakia province
– Captain (Engineer) from Ghab (NW. Hama). pic.twitter.com/j86FE1HRO7