Reality Comes at You Fast and Hard, Liz Truss 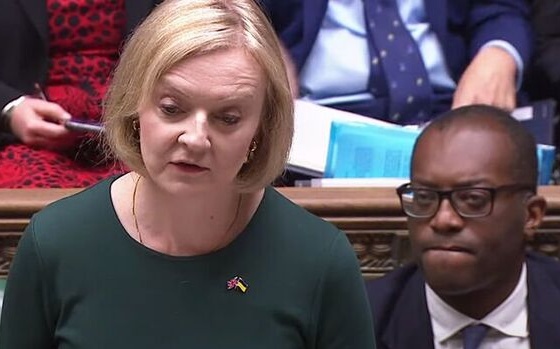 SEPTEMBER 20: After his visit to London for the funeral of Queen Elizabeth II, US President Joe Biden tweets:

I am sick and tired of trickle-down economics. It has never worked.

We're building an economy from the bottom up and middle out.

Biden doesn’t name a specify recipient for his message, but relatively-new UK Prime Minister Liz Truss has been trumpeted her campaign of tax cuts to benefit the wealthiest. She explains that her plan for a “growing economy” includes the removal of a cap on bankers’ bonuses.

The BBC’s Laura Kuenssberg asks her, “Is it it fair to give the wealthiest people more money back?” She cites the plan to reverse National Insurance duties — implemented by her predecessor Boris Johnson to fund the National Health Service and long-term social care — when the richest benefit by more than $1,800 per year and the poorest by £7.66.

Truss replies bluntly, “It is fair.”

Biden has signalled that the US doesn’t want to see a return to the 1980s, when Ronald Reagan based supply side economics on Arthur Laffer’s sketch on a napkin, and the outcome was the sharpest rise in income inequality in modern US history. He doesn’t want the wannabe Thatcher in 10 Downing Street to repeat a Thatcherite economics that fed social division and culminated in the bubble-bursting Black Wednesday in 1992.

See also EA on NBC and on GB News: Liz Truss, Reality Comes at You Fast

SEPTEMBER 21: Biden meets Truss on the sidelines of the UN General Assembly in New York. The discussion is behind closed doors, but White House officials leave no doubt about the President’s position: it is paramount that the Truss Government does not carry out the threat to scrap the Northern Ireland Protocol of the Brexit Agreement.

Downing Street, eager to present Truss as the 2022 Iron Lady of international affairs and to avoid all issues back home, says only that she and Biden had a “short discussion” about Northern Ireland.

SEPTEMBER 26: The Bank of England raises interest rates to a 14-year high of 2.25%, and says the UK is officially in recession.

Reality comes at you fast and hard, Liz Truss.

From Suspended Animation to Rapid Slide

Soon after noon on September 8, just after telling the House of Commons of her intention to address the rise in energy costs of up to 200% in a year, Truss was handed a note. It informed her that the Queen was dying, possibly dead.

All business switched to implementation of the plan for the passing of the monarch, with the announcement at 6:30 p.m., and the accession of King Charles III. For the next 11 days, the UK was in suspended animation for mourning, the Queen’s lying-in-state, and the funerals in Westminster Abbey and Windsor.

That got Truss off an immediate hook. Analysts as well as opposition parties quickly saw that the energy “plan” was more of a sketch. There was no explanation of how a cap on energy prices and support for businesses would be funded. True to her Help The Rich approach, Truss ruled out a windfall tax on the energy companies making record profits.

But that just built up the pressure once the bagpiper had finished on September 19. If the cap was to come into effect on October 1, details would have to be given. In turn, the consequences for the Government’s finances would have to be confronted — or pushed aside — in a “quasi-budget” from Chancellor Kwasi Kwarteng. Meanwhile, inflation was projected to rise to 18%, a rate not seen since 1976.

And what of the Brexit shambles? As Foreign Secretary, Truss had struck a tough pose with the European Union, which meant that negotiations over the Northern Ireland Protocol had gone nowhere. She also tried the same tactic with the Americans, alienating a Biden Administration which — like both parties in Congress — had made clear that the threat to the 1998 Good Friday Agreement was not acceptable.

Truss cracked. On the eve of the meeting with Biden, she admitted that the Brexiteer myth of a quick US-UK trade deal was no more than that. The Holy Grail of economic alliance with the Americans, which Truss’s predecessor Boris Johnson had pledged would occur within months, was long gone.

For the next three days in New York, every staged photo op was of Liz astride the world. She would claim the credit for the UK’s institutional support of Kyiv against Vladimir Putin’s invasion: “We will not rest until Ukraine prevails.”

Here she is with Biden (no mention of Northern Ireland, please). Here she is with Japanese Prime Minister Fumio Kishida. There are even snaps of her with French President Emmanuel Macron and European Commission President Ursula von der Leyen, with nary a mention whether their chats went beyond “How Are You Today?”.

Definitely Mention The War. Don’t Mention Brexit. Or The Economy. Or The Poor.

Reality can be avoided, right?

SEPTEMBER 23: Chancellor Kwasi Kwarteng presents the quasi-budget. The top rate — on those making more than £150,000 per year — will be cut from 45% to 40%. As Truss pledged, the rise in national insurance duties is scrapped, with not a word about how the shortfall for the National Health Service and social care will be covered. A rise in corporation tax from 19% to 25% is cancelled. The threshold for stamp duty, a tax on the purchase of homes, is raised.

But the media and analysts aren’t playing along, noting that Kwarteng hasn’t explained how the tax cuts will be financed. “Levelling Up” Minister Steve Clarke is called out for his Orwellian attempts to explain.

A lot of doublethink around today. Masterclass from @SimonClarkeMP. 🏥Tax cuts help fund public services! 💰Giveaways to the rich help levelling up!
🏦Fiscal policy will boost growth while the Bank controls inflation!

War is peace, freedom is slavery, ignorance is strength!

In a black comedy moment on Friday morning, Chief Secretary to the Treasury Chris Philp tweeted: “Great to see sterling strengthening on the back of the new UK Growth Plan.”

And there was no respite after the weekend. With the pound dropping another 4% to its all-time record of $1.05, financial analysts said sterling is now the “whipping boy” of foreign exchange markets and the UK bond market is “getting smoked”.

They looked for an emergency intervention from the Bank of England, including another rise in interest rates. Chris Weston, the head of research at the brokerage firm Pepperstone, summarized, “Investors are searching out a response….They’re saying this is not sustainable, when you’ve got deteriorating growth and a twin deficit.”

It makes me very sorry to say, but I think the UK is behaving a bit like an emerging market turning itself into a submerging market.

Between Brexit, how far the Bank of England got behind the curve and now these fiscal policies, I think Britain will be remembered for having pursuing the worst macroeconomic policies of any major country in a long time.

Ignorant About Being Ignorant

The approach of Truss and Kwarteng makes so little economic sense that observers are searching for a twisted logic.

Maybe the new Government just wants to hand out cash and favors to very rich friends, including Conservative party donors, and doesn’t care that everyone knows it.

Perhaps the Ministers are playing a clever long game. The Labour opposition will take power — and the albatross of a collapsed economy — in an election by 2024. The burden will be so great that the Tories will win the next vote, presumably looking to their long-term rule of a damaged Britain.

But the simplest explanation could be that Truss is ignorant — and ignorant that she is so ignorant.

In July, as she launched her campaign to become Conservative Party leader and thus Prime Minister, Truss told the flagship BBC Radio programme Today, “My tax cuts will decrease inflation….No other country is following this strategy.”

But reality doesn’t give a damn for defiance. And so a flashback to 1956, when another Conservative Prime Minister — Anthony Eden — sealed his fate while contributing to Britain’s decline.

As Eden conspired with France and Israel and pursued the disastrous invasion of Egypt, Labour’s Aneurin Bevan told a crowd in London’s Trafalgar Square:

If Anthony Eden is sincere in what he is saying, and he may be, then he is too stupid to be a Prime Minister.

Reality is coming at you fast and hard, Liz Truss.