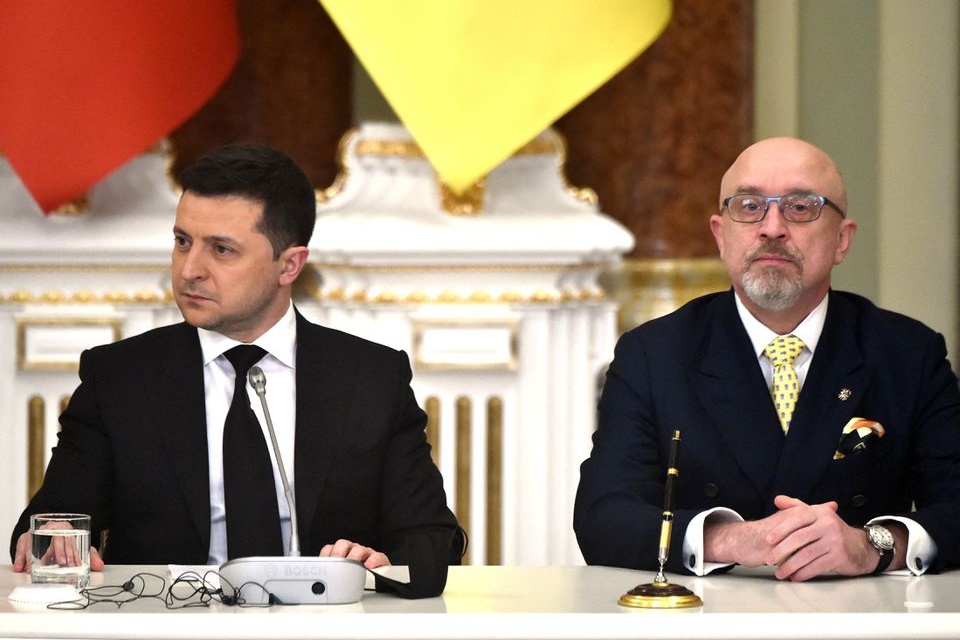 A senior Ukrainian official summarizing today’s strike on a Russian airbase in Crimea:

Pinged a senior Ukrainian Ministry of Defense official just now about these stunning long-range strikes on a Russian air base in Crimea. His reply: "It's just warming up."

Artillery specialist Thomas Theiner assesses 90% probability that the strikes were US-made ATACMS surface-to-surface missiles and 10% that they were cruise missiles.

A “senior Ukrainian military official with knowledge of the situation” has confirmed that Ukraine’s forces struck a Russian airbase in Crimea.

“This was an airbase from which planes regularly took off for attacks against our forces in the southern theater,” the official said. “A device exclusively of Ukrainian manufacture was used.”

Russia’s Defense Ministry claims that the explosion was an accidental explosion of aviation ammunition.

Russia’s governor in Crimea, Sergei Aksyonov, said one person was killed and five injured. He continued:

The situation is localized and is under control. I repeat once again: there is no general evacuation in the district. Only residents of houses located very close to the military airfield will be resettled.

The Ukrainian Ambassador to Turkey, Vasyl Bodnar, says the Turkish company Baykar will start the manufacture of drones in Ukraine.

The factory will be built. Just a week ago, the government approved the bilateral agreement and sent it to the Parliament for ratification, the agreement on the construction of the plant itself.

Baykar has already purchased a plot of land in Ukraine and developed the project for the plant.

Ukraine has received 50 armed drones from Baykar since the Russian invasion on February 24, according to Ukraine Defense Minister Oleksii Reznikov.

Explosions are reported at a Russian military airbase at Novofedorivka in occupied Crimea.

Three witnesses said they heard the blasts saw black smoke rising from the direction of the base.

Two of the witnesses reported at least 12 explosions in a minute about 3:30 p.m., triggering sparks and smoke. The loudest detonation came 30 minutes later, throwing up two plumes of smoke and dust.

Explosions at Novofeorivka Air Base near Saki in Ukraine's Russian-occupied Crimea. Base more than 200 km from nearest UA-held territory. Officially, Kyiv has no missiles that could reach that far… except the secretly Saudi-funded Hrim-2, supposedly still "under development." pic.twitter.com/WyCnitG5Xm

Russia’s top official in Crimea, Sergei Aksyonov, said he had gone to the area and that the “circumstances are being clarified”.

A Russian proxy official was more forthcoming, “Our airfield is exploding. Explosions are at the airfield. All the windows here have been shattered.”

In a sign of the effect of international sanctions, Russian airlines — including the state carrier Aeroflot — are stripping jetliners for spare parts, according to “four industry sources”.

In June, the Kremlin advised airlines to use aircraft for parts to ensure other planes can remain in service through 2025.

The steps are in line with advice Russia’s government provided in June for airlines to use some aircraft for parts to ensure the remainder of foreign-built planes can continue flying at least through 2025.

One source said at least one Russian-made Sukhoi Superjet 100 and an almost-new Airbus A350, both operated by Aeroflot, are grounded and being disassembled.

Equipment is also being taken from two of Aeroflot’s Boeing 737s and Airbus A320s.

The Ocean Lion has 64,720 tons of corn for South Korea. The Rahmi Yağcı is taking 5,300 tons of sunflower meal to Istanbul in Turkey. Both ships left the port of Chornomorsk.

Drone footage shows Russia’s establishment of a military base at the occupied Zaporizhzhia nuclear power complex, the largest in Europe, in southern Ukraine.

The footage indicates unsafe storage of military armaments near nuclear reactors and nuclear waste storage facilities, and the possibility that the plant has been mined.

However, the Institute for the Study of War cautions that a widely-circulated quote from Russia’s Maj. Gen. Valeriy Vasyliev — “We have planted mines in all the important facilities of the Zaporizhzhia nuclear power plant” — is unreliable.

ISW notes the screenshot of a supposed Facebook post by Vasyliev may be from a fake account and that Russian officials claim the general has been in Uzbekistan.

The US is providing an additional $4.5 billion in budget support for the Ukrainian Government.

The US Agency for International Development and Treasury will coordinate the funding withe the World Bank, with $3 billion disbursed in August.

On the military front, the Pentagon disclosed items in the next $1 billion of assistance to Ukrainian forces.

The aid includes more ammunition for the 16 HIMARS medium-range rocket systems sent by the US; new missiles for advanced surface-to-air missile systems; 1,000 Javelin anti-tank missiles; and hundreds of Swedish-made AT4 shoulder-launched anti-tank systems.

The US has now earmarked $9.8 billion in military aid to support Ukraine’s resistance of the invasion.

Pentagon policy chief Colin Kahl noted the effect of the US weapons on the course of the war.

These are GPS-guided munitions. They’ve been very effective in hitting things that previously the Ukrainians had difficulty hitting reliably — command-and-control nodes, sustainment and logistics hubs, key radar systems, and other things. And what it’s done is it’s made it more difficult for the Russians to move forces around the battlefield.

They’ve had to move certain assets back away from the HIMARS. It slowed them down. It’s made it harder for them to resupply other forces. So I think it’s having real operational effects.

The SBU said two Ukrainians had been arrested on suspicion of working for the Russian GRU military intelligence agency. They also allegedly planned to slay a prominent Ukrainian activist.

One suspect is a resident of the Russian-occupied region in eastern Ukraine but entered the country from Belarus. The other suspect lives in the capital Kyiv. Both were detained in Kovel in northwest Ukraine.

The SBU alleges each was promised up to $150,000 by Russian operatives for the murder of each target. It posted a video showing armed officers subduing and handcuffing the two men.

The Kremlin did not respond to the claims.

Last month President Volodymyr Zelenskiy dismissed the head of the SBU, Ivan Bakanov, and Prosecutor General Iryna Venediktova. He said more than 60 staff in the two agencies had assisted the Russian invasion and/or supported the Russians in occupied areas.

Zelenskiy cited 651 cases of treason and collaboration that have been opened against prosecutors and security personnel.