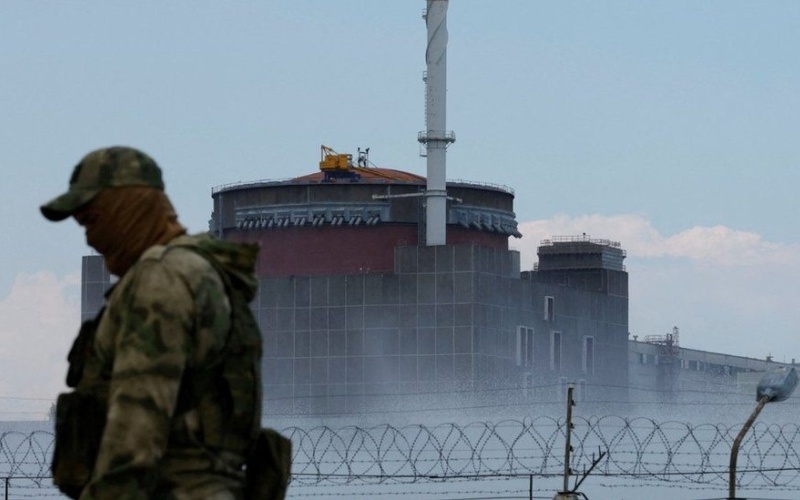 The Zaporizhzhia nuclear complex in southern Ukraine, occupied by Russian forces in the first days of their February 24 invasion (Reuters)

Sunday’s Coverage: Another Russian Atrocity Against A Ukrainian POW 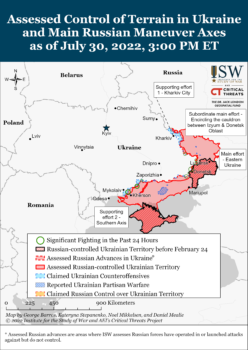 A Russian soldier has been sentenced to 10 years in prison for tank fire on a multi-story apartment block.

The Ukraine Interior Ministry said a court in Chernihiv in northern Ukraine convicted Mikhail Kulikov, later captured while fighting, of the strike on the residential building on February 26.

Kulikov pleaded guilty at the trial and asked for leniency because he was following orders.

The systems, which have ranges of up to 2 1/2 miles, will be used to defend important infrastructure.

The head of Ukraine’s nuclear power agency Energoatom has called for the Zaporizhzhia nuclear power plant to be a military-free zone, amid concerns of Russian occupiers using it as a base and launching attacks (see Original Entry).

Petro Kotin said there should be peacekeepers should be on the site.

He called for an international mission to the plant by the UN and the IAEA this month: “We really need it urgently, as soon as possible.”

Energoatom warns that Russia has mined the plant. It quotes Russia’s Maj. Gen. Valeriy Vasyliev, “We have planted mines in all the important facilities of the Zaporizhzhia nuclear power plant. And we do not hide this from the enemy. We warned them. The enemy knows that the plant will be either Russian – or no one’s.”

“This will be Russian land or scorched earth!” The commander of Russian forces in Zaporizhzhya, who’s also the head of Russia’s defense “against” radioactive, chemical and biological threats reportedly threatens “various scenarios” at Enerhodar plant. pic.twitter.com/LZ5MfAADjL

Ukrainian officials have confirmed that their forces carried out long-range strikes on Russian troop bases and two key bridges across the Dnieper River in the Kherson region in southern Ukraine overnight.

Natalia Humeniuk, spokesperson for Ukraine’s Southern Command, said, “The results are rather respectable, hits on the Antonovskiy and Kakhovskiy Bridges.”

Russian proxy officials earlier acknowledged the strike on the Antonovskiy Bridge, saying that there was no “critical damage” but that repairs — carried out because previous attacks — will be delayed (see 0711 GMT).

Russian shelling killed two people in the Kharkiv region in northeast Ukraine in the past 24 hours.

Governor Oleh Synyehubov said the roof of the administrative building in Kharkiv’s Kyiv district was set on fire overnight.

the Russians, because of their lack of success at the front, are striking peaceful towns and villages in the region. But we are stronger than their pathetic attempts to intimidate us. Victory is ours!

Now Pavlovo Pole is being shelled already in the morning….Minutes ago there was an explosion. There is definitely no military infrastructure in this peaceful and densely populated area. I ask everyone to be in shelters — the shelling can be repeated.

Governor Synyehubov said another person was killed and one injured in this morning’s attacks.

Ukrainian forces have again struck the Antonovskiy Bridge, an essential link for the Russian occupation in Kherson Province in southern Ukraine.

Russian proxy officials said the bridge, across the Dnipro River to the western Kherson region including Kherson city, was hit overnight.

Kirill Stremousov, deputy head of Kherson’s Russian proxy administration, said, “There is no critical damage.” However, the equipment of constructors repairing the bridge was “burned down”, delaying the reopening of the bridge after earlier Ukrainian attacks.

Bolstered by US-supplied HIMARS medium-range rocket systems, the Ukraine military has damaged all four bridges across the Dnipro River and its tributaries. The attacks threaten to cut off Russian forces in the western Kherson region from troops and equipment in the eastern section.

Amnesty International apologized on Sunday over its widely-criticized report about the Ukrainian military and civilian areas.

Amnesty International deeply regrets the distress and anger that our press release on the Ukrainian military’s fighting tactics has caused….

Amnesty International’s priority in this and in any conflict is ensuring that civilians are protected. Indeed, this was our sole objective when releasing this latest piece of research. While we fully stand by our findings, we regret the pain caused.

In a report on Thursday, Amnesty said Ukrainian forces had established bases and weapons systems in residential areas, including in schools and hospitals.

Amnesty Ukraine challenged its parent organization, saying it had not been allowed any input into the report. Oksana Pokalchuk resigned in protest on Friday.

My thoughts on the @amnesty report on #Ukraine. These are my personal thoughts and not affiliated with any of the orgs I work for. They got the law wrong. Protocol 1 states militaries shall to the maximum extent feasible AVOID locating military objects near populated areas 1/

Amnesty International recognized the issue with the report in its apology:

This does not mean that Amnesty International holds Ukrainian forces responsible for violations committed by Russian forces, nor that the Ukrainian military is not taking adequate precautions elsewhere in the country.

We must be very clear: Nothing we documented Ukrainian forces doing in any way justifies Russian violations.

The Sacura sailed from Yuzni with 11,000 tons of soybeans for Italy. The Arizona left Chernomorsk with 48,458 tons of corn to Iskenderun in southern Turkey.

Ten ships have now sailed — carrying grains, foodstuffs, and oil — since the July 22 deal lifting the Russian blockade of the ports.

Guterres’ call was made on Sunday after reports that Russia has not only used the nuclear plant, the largest in Europe as a military base but has damaged electrical lines and facilities with its shelling.

“Any attack to a nuclear plant is a suicidal thing,” Guterres told a news conference in Japan on Monday. “We fully support the IAEA [International Atomic Energy Agency] in all their efforts in relation to create the conditions of stabilization of the plant.”

Ukraine President Volodymyr Zelenskiy, in his nightly address to the nation, summarized his conversation with European Council President Charles Michel:

There is no such nation in the world that can feel safe when a terrorist state fires at a nuclear plant. God forbid, if something irreparable happens, no one will stop the wind that will spread the radioactive contamination.

Therefore, a principled response of the international community to these Russian attacks…is needed right now.

On Saturday, Zelenskiy has called for new sanctions against Russia over the “global threat” from its occupation of Zaporizhzhia.

Ukraine’s State-run nuclear operator Energoatom said on Friday that the Russian military carried out three strikes on the site of the plant, destroying electrical transmission lines and damaging an auxiliary building near a reactor.

Russian and Russian-proxy officials insist that it is Ukrainian forces who carried out Friday’s attacks, despite Kyiv’s assurances that it will not challenge Russian use of the nuclear complex as a shield.