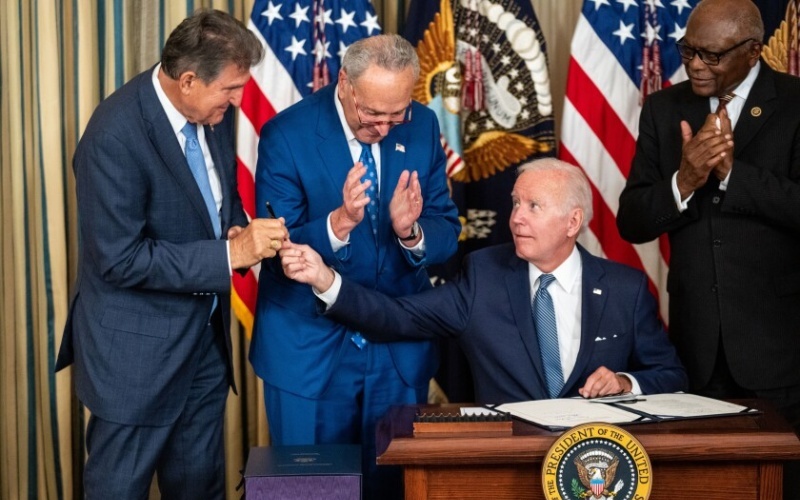 In a White House ceremony on Tuesday, Biden said, “With this law, the American people won and the special interests lost. Today offers further proof that the soul of America is vibrant, the future of America is bright, and the promise of America is real and just beginning.”

Congress has completed the passage of a historic $750 billion climate and health care bill, with House passage on Friday night.

The legislation was confirmed on a party-line 220-207 vote.

“Today is really a glorious day for us,” said Speaker Nancy Pelosi of California. “This legislation is historic, it’s transformative and it is really a cause for celebration.”

ORIGINAL ENTRY, AUG 8: After almost two years of wrangling and Republican opposition, the US Senate has passed a historic $750 billion climate and health care bill.

The bill is a reduced version of the Biden Administration $3 trillion and then $2.2 trillion “Build Back Better program” — trimmed to win over Democrat Senators Joe Manchin and Kyrsten Sinema — but it still provides an unprecedented $430 billion to combat climate change and move to a “green economy”, as well as expanding access to affordable health care and lowering the cost of prescription drugs.

The initiatives will be funded, and the Federal Government deficit reduced, through new taxes including a 15% minimum levy on large corporations and a 1% tax on stock buybacks and through enhanced powers for the Internal Revenue Service.

The Democrat-majority House, expected to take up the legislation on Friday, now must approve the bill before President Biden can sign it into law.

Biden said in a statement:

The bill appeared to be buried this spring by the opposition of Sen. Manchin of West Virginia who objected to its climate and tax provisions. However, at the end of July, he and Senate Majority Leader Chuck Schumer reached an accord.

See also In A Reversal, Senator Manchin Accepts US Social and Climate Plans

On Thursday, Sen. Sinema of Arizona finally confirmed her support after Democrat leaders agreed to changes in tax proposals.

House Democrats signalled that they will back final passage despite the amendments of the tax provisions, because the package does not raise individual income tax rates.

In a last-ditch attempt to block the bill, Republicans engaged in a 16-hour “vote-a-rama” on amendments on Saturday and Sunday.

Senate Minority Leader Mitch McConnell of Kentucky grumbled afterwards that the bill was “a war on American fossil fuel” with “giant job-killing tax hikes”. He insisted that climate change “is a 3% issue. Americans want solutions for inflation, crime, and the border.”

The Act is projected to reduce US carbon emissions by up to 40% by 2030, with further Biden Administration regulations and action from states hoping to meet the goal of cutting emissions by 50%.

Tax incentives seek to bring down the cost of electricity with more renewables, and to encourage American consumers to switch to electricity to power their homes and vehicles.

The bill empowers Medicare to negotiate prices of certain costly medications which are administered in doctors’ offices or purchased at the pharmacy.

Democrats also to extend the enhanced federal premium subsidies for Obamacare coverage through 2025, a year later than lawmakers have been discussing.

The bill sets a 15% minimum tax on the income large corporations — those with profits over $1 billion — report to shareholders, known as book income, as opposed to that reported to the Internal Revenue Service. A 1% excise tax on companies’ stock buybacks raises another $74 billion.