In A Reversal, Senator Manchin Accepts US Social and Climate Plans 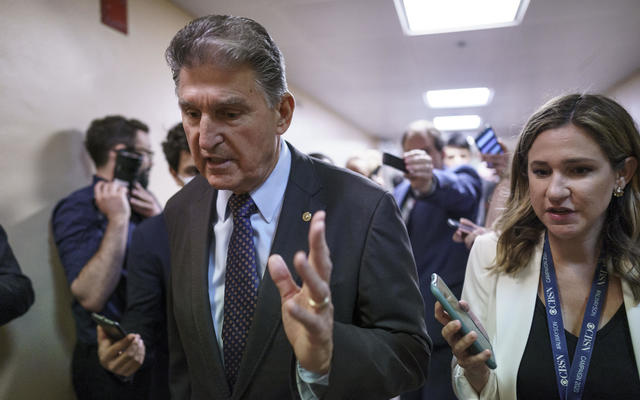 In a sudden reversal, Sen. Joe Manchin of West Virginia (pictured) has lifted his obstruction of the Biden Administration’s expansive social and climate change plan.

Less than two weeks ago, Manchin — one of two Democratic senators holding up legislation — pulled out of protracted negotiations with the Administration over the $2.2 trillion “Build Back Better” plan. He said he would only support a plan lowering the cost of prescription drugs and an extension of expanded Affordable Care Act subsidies.

But on Wednesday, Manchin and Senate Majority Leader Chuck Schumer of New York announced agreement on $369 billion for climate and energy proposals, the most ambitious plan ever pursued by Congress. Federal spending on prescription drugs will be cut by $288 billion, while $451 billion will be raised in new tax revenue over a decade. The projection federal deficit will fall by about $300 billion.

Schumer said, “By a wide margin, this legislation will be the greatest pro-climate legislation that has ever been passed by Congress.” He thanked Manchin for “his willingness to engage and his commitment to reaching an agreement”.

This is the action the American people have been waiting for. This addresses the problems of today — high health care costs and overall inflation — as well as investments in our energy security for the future.

Manchin did not explain the reason for his shift after re-engaging in negotiations with Schumer in recent days. But there was a clue in his joint announcement with Schumer that they have a commitment from Biden and House Speaker Nancy Pelosi of California that Congress will address permissions of energy infrastructure, potentially including natural gas pipelines, before September 30.

That could lead to approval of a pet project of Manchin, who is backed by money from fossil fuel interests, for the Mountain Valley Pipeline taking shale gas from West Virginia to Virginia.

The breakthrough came hours after another big victory for the Administration with the bipartisan passage in the Senate of a $280 billion industrial policy bill to bolster US competitiveness with China.

That followed acceptance by Senate Minority Leader Mitch McConnell of Kentucky, who had said he would never support the industrial policy as long as Democrats pursued Build Back Better.

However, House Republicans said, upon news of the Schumer-Manchin deal, that they will now oppose the industrial policy legislation.

McConnell sneered at the deal to address social issues and climate change, “Democrats have already crushed American families with historic inflation. Now they want to pile on giant tax hikes that will hammer workers and kill many thousands of American jobs. First they killed your family’s budget. Now they want to kill your job too.

But Manchin’s refusal, after months of negotiations, has suspended the accord. Echoing the language of Republican opponents of the deal, he bragged on Friday on a radio station in his home state of West Virginia:

I said we’re not going to go down that path overseas right now because the rest of the countries won’t follow, and we’ll put all of our international companies in jeopardy, which harms the American economy.

So we took that off the table.

The agreement would have required a 15% minimum tax on global profits no matter where companies establish themselves. Taxes would be based on where goods and services were sold, not where company headquarters are located.

For now, the situation will allow for the continued aggressive use of global tax avoidance strategies by companies like the pharmaceutical giant AbbVie. A Senate Finance Committee report this month found that the company made three-quarters of its sales to American customers in 2020, yet reported only 1 percent of its income in the United States for tax purposes — a move that allowed it to slash its effective tax rate to about half of the 21 percent American corporate income tax rate.

Throughout 2021, Manchin opposed the Administration’s $3.5 trillion “Build Back Initiative” for economic, social, and environmental programs. Alongside fellow Democrat Sen. Kyrsten Sinema of Arizona, Manchin ensured the success of a Republican blockade of the legislation in a 50-50 Senate.

Manchin, supported by fossil fuel companies and trying to retain office in a largely-Republican state, insisted that clean energy provisions were counter-productive and that he was standing against higher taxes.

The opposition meant that the major accomplishment of the Administration was a $1.2 trillion infrastructure package, passed last autumn with support from some Republicans.

President Joe Biden and his advisors continued to hope for a shift in Manchin’s position. They pared Build Back Better to $2.2 trillion. Even though the senator declared in December, “I’ve tried everything humanly possible. I can’t get there. This is a no,” the Administration said it would persist with negotiations.

But on Thursday, Manchin told Senate Majority Leader Chuck Schumer of New York that he will only support a plan lowering the cost of prescription drugs and an extension of expanded Affordable Care Act subsidies, which are set to expire at the end of 2022.

Schumer and his staff said they had believed until just a few hours before the final meeting that a deal was possible.

Political headlines are of no value to the millions of Americans struggling to afford groceries and gas as inflation soars to 9.1%. Senator Manchin believes it’s time for leaders to put political agendas aside, re-evaluate and adjust to the economic realities the country faces to avoid taking steps that add fuel to the inflation fire.

Senator Manchin has not walked away from the table.

“He Is Condemning Our Own Children2

Manchin’s blockade ensure that the Administration cannot advance toward a goal of cutting US emissions by about 50% by 2030.

I’m not going to sugarcoat my disappointment here, especially since nearly all issues in the climate and energy space had been resolved. This is our last chance to prevent the most catastrophic — and costly — effects of climate change. We can’t come back in another decade and forestall hundreds of billions — if not trillions — in economic damage and undo the inevitable human toll.

Professor Leah Stokes of the University of California Santa Barbara, an advisor to congressional Democrats on climate legislation, said of Manchin’s barrier to months of work: “The stakes are so high. It’s just infuriating that he is condemning our own children.”

Tiernan Sittenfeld of the League of Conservation Voters, reacted, “There truly aren’t words, at least words that are suitable for printing in The New York Times, for how appalled and outraged we are.”