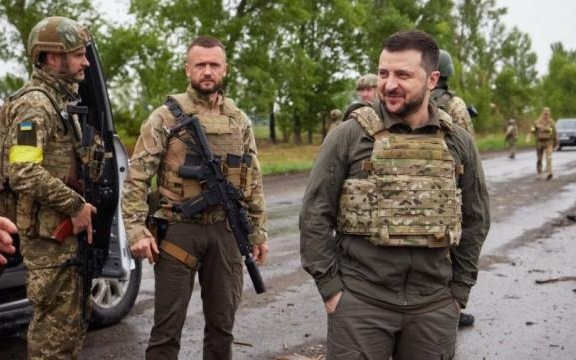 Russia is proceeding with the dissolution of the Jewish Agency, which oversees the emigration of Russian Jews to Israel.

A Moscow court heard on Thursday that the Justice Ministry had requested the break-up of the Agency, with no detail of supposed legal violations. A hearing has been set for 28 July.

Israeli Prime Minister Yair Lapid said he would use “diplomatic channels” to try and keep the agency open. An Israeli delegation will discuss the issue next week in Moscow.

Russian Jews will not be held hostage by the war in Ukraine.

The attempt to punish the Jewish Agency for Israel’s stance on the war is deplorable and offensive. The Jews of Russia cannot be detached from their historical and emotional connection to the State of Israel.

Russian authorities have put pressure on the Jewish community and the Agency to suppress any dissent over Vladimir Putin’s invasion. The Chief Rabbi of Moscow, Pinchas Goldschmidt, left the country for Israel, saying:

As the terrible war against Ukraine unfolded over the last few months, I could not remain silent, viewing so much human suffering, I went to assist the refugees in Eastern Europe and spoke out against the war. As time progressed, despite re-electing me to the position of Chief Rabbi last month, it became clear that the Jewish community of Moscow would be endangered by me remaining in my position.

Ukraine and Russia have signed parallel agreements with Turkey and the UN which seek the lifting of the Russian blockade on Ukrainian export of grain through Black Sea ports (see 0812 GMT).

2. No transport escort by Russian ships and no presence of 🇷🇺 representatives in our ports. In case of provocations, an immediate military response.

3. All inspections of transport ships will be carried out by joint groups in 🇹🇷 waters in the event of such a need. 2/2

Three people have been killed by a Russian strike on a school in Kramatorsk in eastern Ukraine.

Kramatorsk is the capital of the Ukrainian part of the Donetsk oblast, and is a target of the Russian offensive in the Donbas.

Three of the fatalities were in Siversk, near the frontline of the Russian offensive.

Kyrolenko wrote that 637 civilians have been killed and another 1,641 injured in Donetsk during the Russian offensive. However, actual casualties are far higher, since those in Mariupol and Volnovakha are unknown.

Russia resumed gas flows through the Nord Stream 1 pipeline on Thursday after 10 days of maintenance, but at only 30% capacity.

Saying that Germany cannot rely on the Russian supplies, Habeck introduced measures such as employers allowing home working wherever possible; a legal obligation to terminate inefficient heating systems; and a ban on gas to heat private pools.

Ukraine, Russia, Turkey, and the UN are expected to sign a deal on Friday seeking the removal of the Russian blockade of Ukrainian ports.

UN Secretary General António Guterres will join representatives of the three countries in Istanbul on Friday, said the office of Turkish President Recep Tayyip Erdoğan. The signing ceremony will be at 1330 GMT in the Dolmabahce Palace.

Ukraine supplies about 9% of the world’s wheat. About 25 million tons of grain are blocked by the Russians, who have also destroyed storage facilities with missile and rocket strikes.

The details of the agreement have not yet been published. However, diplomats have said it includes Ukrainian vessels guiding grain ships in and out through mined port waters; Russia agreeing to a truce during the shipments; and Turkey, supported by the UN, inspecting ships.

In his nightly video address to the nation, following a meeting with military commanders, Zelenskiy said:

We discussed the current situation on the frontline, around Ukraine. We defined tasks in some tactical areas to strengthen our positions. And we also thoroughly worked out the issue of providing the troops with the modern weapons – the intensity of attacks on the enemy still needs to be increased.

The participants of the staff meeting agreed that we have a significant potential for the advance of our forces on the front and for the infliction of significant new losses on the occupiers.

Russia’s offensive in the east — following its initial failure in the north, unable to occupy Kyiv and topple the Zelenskiy Government — has occupied almost all of the Luhansk region. However, analysts assess that Russia, having lost more than 30% of its combat effectiveness amid heavy losses of troops and materiel, will struggle to make further gains in neighboring Donetsk.

Meanwhile, Ukrainian forces are preparing for a counter-offensive to retake areas in the south, seized by the Russians in the first days of the invasion.

Kyiv has been bolstered by the supply of 12 US-made HIMARS medium-range rocket systems, with seven more to come. Attacks with the HIMARS have already struck more than 30 Russian military logistics centers and ammunition depots, beginning to offset Moscow’s large advantage in artillery.

Russia has countered with deadly missile strikes, including on civilian areas, but Zelenskiy said last night:

Every one of these Russian attacks is an argument for Ukraine to receive more Himars and other modern and effective weapons. Every one of these attacks only strengthens our desire to defeat the invaders and that will certainly happen.

Russia “About to Run Out of Steam”

Zelenskiy’s summary has been supported by the assessments of US and UK military and intelligence services in recent days.

Richard Moore, the head of the British intelligence service MI6, said at the Aspen Security Forum in Colorado on Thursday that Russian forces are “about to run out of steam”.

The Russians will increasingly find it difficult to supply manpower material over the next few weeks. They will have to pause in some way, and that will give the Ukrainians opportunities to strike back.

He noted that Russia had also been crippled by the expulsion from Europe of about half of all its intelligence operatives under diplomatic cover, a total of close to 400 officials.

On Wednesday, US CIA head William Burns told the Aspen forum that 15,000 Russian troops have been killed and 45,000 wounded during the invasion.

[Ukrainian forces] are absolutely clear that they plan to restore the whole of their territory in terms of Ukraine, and they see a Russia that is struggling, a Russia that we assess has lost more than 30% of its land combat effectiveness.

What that actually means is 50,000 Russian soldiers that have either died or been injured in this conflict, nearly 1,700 Russian tanks destroyed, nearly 4,000 armoured fighting vehicles that belong to Russia destroyed.

Because of the shortage, Russia is increasing the use of air defence missiles such as S-300s and S-400s.

These weapons have relatively small warheads, designed to destroy aircraft. They could pose a significant threat against troops in the open and light buildings but are unlikely to penetrate hardened structures.

There is a high chance of these weapons missing their intended targets and causing civilian casualties because the missiles they are not optimised for this role, and their crews will have little training for such missions.