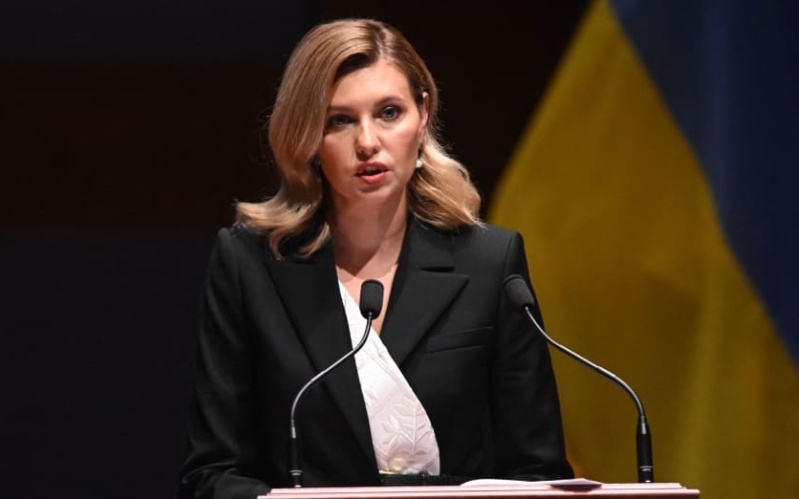 Ukraine First Lady Olga Zelenska addresses the US Congress, July 20, 2022: “I am asking for weapons to protect one’s home and the right to wake up alive in that home” (Saul Loeb/AFP/Getty)

The toll from this morning’s Russian shelling of a transport stop in Kharkiv (see 0858 GMT) has risen to three killed and 23 wounded.

Ukraine President Volodymyr Zelenskiy has criticized the latest European Union sanctions on Russia as insufficient, “This is not enough and I am telling my partners this frankly. Russia must feel a much higher price for the war to force it to seek peace.”

The EU announced on Wednesday that it is blocking imports of Russian gold and blacklisting Russia’s largest bank, Sberbank, eight other entities, and 48 individuals.

The UK is sending another package of military aid to Ukraine, including scores of artillery guns, more than 1,600 anti-tank weapons, counter-battery radar systems, hundreds of drones, and more than 50,000 rounds of ammunition.

“Together with our international partners, we will ensure Ukraine has the tools to defend their country from Putin’s illegal invasion,” said Defence Minister Ben Wallace.

The latest Russian bombardment of Kharkiv in northeast Ukraine has killed at least two people and injured 19, including a child.

Governor Oleh Synyehubov wrote on Telegram, “The Russian enemy attacks exclusively on city streets, trade pavilions, and residential infrastructure. There is a hit in a residential building where a private dental office was located….Residents of Kharkiv are asked to be extremely careful, the enemy is firing chaotically and brutally at the city.”

In eastern Ukraine, Russian forces have shelled the central market in the city of Bakhmut.

Emergency services reported, “Several trading containers on a total arena of 100 square meters caught fire. Information about the dead and injured is being clarified. At present the fire has been localized and completely extinguished.”

Bankruptcies among Russian citizens have risen by 37.8%, compared to January-June 2021.

After 10 days of maintenance of the Nord Stream 1 gas pipeline to Germany, Russia has resumed supply but at reduced capacity.

Pipeline operator Nord Stream AG said gas flowed again on Thursday morning. However, it said the output would need time to ramp up, with deliveries at only 30% of capacity.

US intelligence agencies estimate that about 15,000 Russian troops have been killed and about 45,000 wounded in Vladimir Putin’s invasion.

CIA Director William Burns told the Aspen Security Forum in Colorado, “The Ukrainians have suffered as well – probably a little less than that. But, you know, significant casualties.”

The Ukrainian military says Russia has lost more than 38,000 troops. Western agencies assess that the combat effectiveness of Moscow’s forces has diminished by more than 30%.

Amid Vladimir Putin’s threat to cut off gas supplies, the European Union has agreed a voluntary target for countries to restrict usage by 15% from August until March.

ORIGINAL ENTRY: The US is despatching four more advanced rocket systems to Ukraine.

Defense Secretary Lloyd Austin announced the delivery of the HIMARS (High Mobility Artillery Rocket System) on Wednesday: “Ukraine needs the firepower and the ammunition to withstand this [Russian] barrage and to strike back.”

The US will also provide additional Guided Multiple Launch Rocket System (Gmlrs) precision ammunition, which can strike targets up to 80km (50 miles) away.

In the past month, the Biden Administration has sent 12 wheel-mounted M142 HIMARS, and Norway has announced the delivery of three truck-mounted M270 HIMARS.

The rocket systems are already changing the balance of the war, with Ukrainian forces striking more than 30 military logistics centers and ammunition depots of the invading Russians.

Russian Foreign Minister Sergey Lavrov showed his concern in remarks to State outlet RT, “The West is trying to aggravate the situation with an impotent malice. It’s pumping Ukraine with long-range weapons.”

He blustered that Russia will expand its occupation of Ukraine if rocket systems continue to be sent to Kyiv.

Now the geography is different. It’s not just Donetsk and Luhansk, it’s Kherson, Zaporizhzhia, and a number of other territories. And this is an ongoing process, consistent and insistent.

Zelenska to US Congress: “Weapons to Protect Our Homes”

In a passionate 15-minute speech on Wednesday, Ukraine’s First Lady Olena Zelenska, appealed to US legislators for more military aid:

I am asking for weapons, weapons that would not be used to wage a war on somebody else’s land, but to protect one’s home and the right to wake up alive in that home.

The answer is right here in Washington DC. Help us to stop this terror against Ukrainians and this will be our joint great victory in the name of life, freedom and the pursuit of happiness.

The European Union announced a fifth tranche of military assistance of €500m ($511m) on Wednesday, bringing the total to €2.5bn (32.55 bn). Foreign affairs head Josep Borrell said the EU “remains focused and steadfast in its support for Ukraine, together with partners”.

The EU also confirmed further sanctions on Moscow, including on imports of Russian gold and on Russia’s largest bank, Sberbank.

Lithuania added that it will send military support including M13 and M577 armoured personnel carriers and ammunition for reserve training.