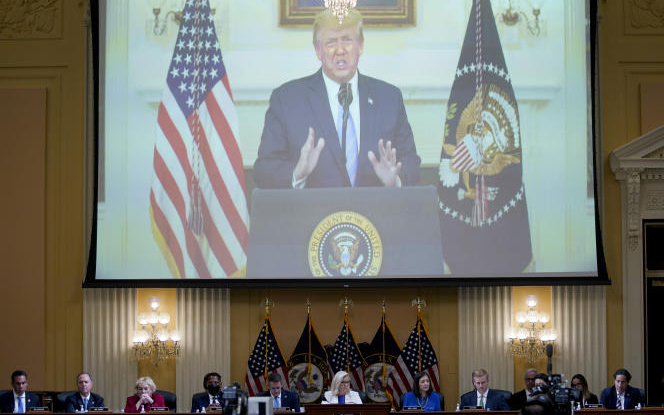 In its latest hearings on the Capitol Attack, a House select committee documents how Donald Trump refused to halt the assault, even as it threatened the lives of legislators, Vice President Mike Pence, and security personnel.

A series of witnesses, shown in video deposition, testified that Trump did not call a single call to a law enforcement or national security official during the hours of the attack.

White House spokeswoman Sarah Matthews, who appeared in person on Thursday, reconted a conversation with White House Press Secretary Kayleigh McEnany: “She looked directly at me, and in a hushed tone, shared with me that the President did not want to include any sort of mention of peace” in his tweets.

The Chairman of the Joint Chiefs, Gen. Mark Milley, said he was astonished that he never heard from Trump:

You know, you’re the Commander in Chief. You’ve got an assault going on on the Capitol of the United States of America and there’s nothing? No call? Nothing? Zero?

Trump’s refusal to intervene followed his unsuccessful attempt to lead a march on the Capitol. That culminated in an assault on a Secret Service agent who insisted that he had to return to the White House after a speech whipping up his supporters.

Video and audio depicted the possible danger to Pence and his security detail as they tried to evacuate from the besieged Capitol.

p>A national security professional who worked in the White House said that “starting to fear for their own lives”, the security personnel made calls “to say goodbye to family members”. He recalled:

Is the VP compromised? Like, I don’t know. We didn’t have visibility, but if they’re screaming and saying things, like, say goodbye to family….this is going to a whole other level soon.

Security cameras and audio showed the near-miss for Pence: as his bodyguards were assessing the Senate stairwell for evacuation, attackers were confronting police in a hallway downstairs.

It was only after Pence was secure that necessary calls were made to regain control of the Capitol. The Vice President “worked the phones” with two or three calls to Gen. Milley and communication with Acting Defense Secretary Chris Miller. Miller explained:

Audio clips highlighted how Republican legislators — including Sen. Josh Hawley, who was trying to overturn President-elect Biden’s victory and had rallied the Trumpists outside the Capitol hours earlier — hid in fear.

House Minority Leader Kevin McCarthy spoke of conversations with Trump where he begged for intervention, and also recalled considering advice to Trump to resign.

Despite this, McCarthy travelled to Trump’s Mar-a-Lago resort in Florida days later and pledged allegiance. He later blocked involvement by Republicans with the committee, an order defied by committee vice-chair Rep. Liz Cheney of Wyoming and by committee member Rep. Adam Kinzinger of Illinois.

“These People Are More Upset About Election Than You Are”: Trump to House GOP Leader McCarthy During Capitol Attack

The committee juxtaposed the well-known photo of Hawley raising his fist in support of the Trumpists with video showing him running out of the Senate chamber.

That evening, Hawley forced a debate on Biden’s Pennsylvania electors and voted against certifying them.

Trump’s Attempt to Lead the Attack

The committee also provided corroborating evidence for the testimony, at its previous hearing, from White House staffer Cassidy Hutchinson about Trump’s foiled attempt to lead his supporters.

Committee member Rep. Elaine Luria of Virginia spoke of two additional sources. “A former White House employee with national security responsibilities”, backing up Hutchinson, spoke of the account by Tony Ornato — White House deputy chief of staff and a Secret Service official — that Trump was “irate” when agent Robert Engel would not take him to the Capitol.