Russia and Iran’s “Pact of Isolation” 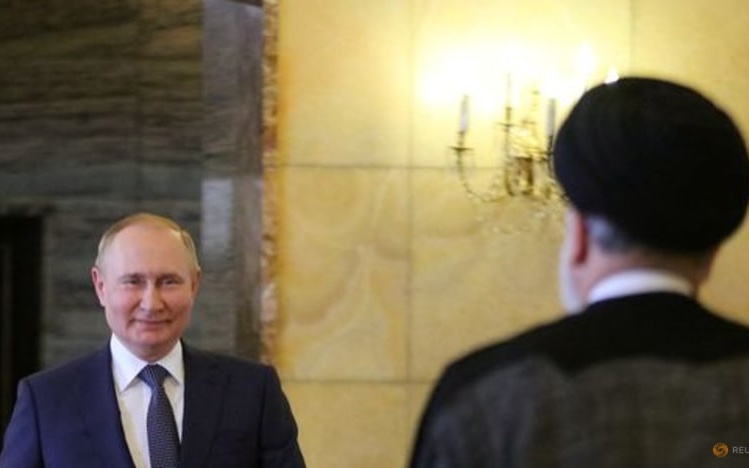 Facing economic and military difficulties in his invasion of Ukraine, Russian leader Vladimir Putin popped up in Iran’s capital Tehran on Tuesday. He would show the world that, despite sanctions on Moscow and international assistance for Ukraine’s resistance, he was not isolated in his mission.

Putin got his photo opportunity with Iran’s Supreme Leader. Ayatollah Khamenei bashed the US and NATO as he amplified Vladimir’s pretext for the invasion, “if you had not taken the initiative, the other side would have caused the war with its own initiative.” There were more pictures with the Iranian and Turkish Presidents, Ebrahim Raisi and Recep Tayyip Erdoğan.

For “anti-imperialist” — and thus pro-Kremlin — sites like The Cradle, this was proof of a new emerging bloc based on “Russia’s consequential ties” with Iran and Turkey. A more surprising source of support was the Biden Administration, which declared that Iran is preparing to send hundreds of armed drones to Moscow, amid Russia’s military deficiencies and losses.

Beyond the pictures and the posturing, the reality is more mundane and not nearly so glorious or villainous. The Russian relationship with Iran is not an alliance, but a convergence of interests in a time of crisis for each country. And the driver for this convergence is not strength but weakness: both Putin and the Supreme Leader are thumping their chests in a Canute-like pose against international sanctions, political blowback over their ventures, and the limits of their militaries.

This is a pact of the isolated.

The post-1979 relations of Iran with the Soviet Union and Russia have fluctuated. Despite being the first country to recognize Ayatollah Khomeini’s Islamic Republic, the Soviets supplied Saddam Hussein with weapons throughout the 1980-1988 Iran-Iraq War.

The end of this conflict, soon followed by the Soviet collapse, brought reconciliation. Iran’s Rafsanjani Government emphasized economic links in the 1990s. There were arms deals, and an agreement for Russia to build the first Iranian nuclear reactor at Bushehr.

But amid the turmoil of the post-9/11 Middle East and the US-led invasion of Iraq in 2003, Putin played a cautious hand after he rose to power in 2000. Russia let the US tangle itself in knots in the region, but it shared the American and European concerns about the intentions of the Iranian nuclear programme. Moscow was part of the 5+1 Powers (Russia, US, UK, France, Germany, and China) negotiating with Iran, and it also supported UN sanctions and suspended a deal with Tehran to deliver advanced S-400 anti-air missile systems. Iranians chided the Russians over delays in the completion of the Bushehr reactor, which finally started generating electricity in October 2011.

The catalyst for a closer relationship was the Syrian uprising of March 2011. Both Russia and Iran provided logistical, intelligence, and propaganda support for the Assad regime from the outset of its repression of mass protests. With the Assad military at risk of dissolution, Tehran committed itself in September 2012 to establish a 50,000-strong Syrian militia. It brought in Iranian personnel and fighters from Iraq, Pakistan, and Lebanon’s Hezbollah.

That intervention was still not sufficient to sustain the Assad regime, as opposition factions, Kurdish groups, and the Islamic State took most of Syria. So in September 2015, Russia launched its massive military intervention with special forces, sieges, and bombardment which levelled opposition territory. Bashar al-Assad was propped up, as Syria fractured into three parts: Turkish-backed opposition in the northwest, the Kurdish-controlled northeast, and the Russian- and Iranian-backed regime territory elsewhere.

Linked by their calculations that Assad was the flawed but preferred vehicle for their political, economic, and military position, Russia and Iran had established a short-term “tacit security arrangement“.

However, Iran was not Putin’s exclusive partner. In the complex turmoil of Syria, Russia also established tacit security arrangements with Israel and with Turkey. Moscow and Tehran are also competitors in the country for resources, “reconstruction” projects, and military position.

While Russia had increasingly spoken out against US sanctions on Tehran, particularly after the Trump Administration’s withdrawal from the 2015 nuclear deal, it is still part of the 5+1 process to bring America back — and to ensure Iranian compliance with limits. It has maintained a wary, cautious approach to the conflicts between the US, Iran, and other parties, from Iraq to Lebanon to Yemen to Israel-Palestine. Moscow may seek benefit from a relationship with Iran, but Putin also looks for this from links with Iranian rivals such as Saudi Arabia and the UAE.

Then, on February 24, 2022, Putin sent most of Russia’s armed forces into neighboring Ukraine.

The Iran-related complications were immediately evident. With the negotiations on a renewed Iranian nuclear deal close to completion, Russia threatened to derail them by demanding that sanctions — imposed over the invasion — be lifted on Moscow as well on Tehran.

The Russians soon backed down amid Iranian objections. (The discussions subsequently stalled over Iran’s call for the US to lift its designation of the Revolutionary Guards as a “foreign terrorist organization”.) However, another difficulty ensued: with Moscow failing to seize Kyiv and topple the Zelenskiy Government quickly — and taking heavy losses in its operations — Russia has had to draw down on its military positions in Syria. That has raised questions over Iran’s deployment, including whether it takes over those positions, and has opened the space for Turkey’s Erdoğan to threaten renewed cross-border military operations into northern Syria.

Most significantly, the international response is putting more pressure on a Russian economy which was already struggling. Moscow has never fulfilled repeated declarations that it would provide billions of dollars in loans to help Tehran, and now it joins Iran in the search for assistance to get out of its predicament.

That salvation is not likely to be forthcoming. China is happy to take advantage of heavily-discounted oil from both Russia and Iran, but it is maintaining a cautious line over any bailout of Moscow with either economic or military assistance. India has set out its neutral position, and also raised its oil purchases, by rushing US criticism — but will also not want to jeopardize its position in the India-US-Japan-Australia “Quad”. President Biden patched up the US position with Saudi Arabia and the UAE during his trip to the region, and both Gulf States still Iran as a rival, even if the Emirates are balancing this with talk of an expanded diplomatic presence in the Islamic Republic.

The most dramatic image from Tehran was not of Putin with the Supreme Leader, or of him with his Turkish and Iranian counterparts.

It was the minute-long video of Putin alone. In March 2020, he tried to humiliate Erdoğan by leaving him for several minutes in a hallway outside a meeting room. Now Erdoğan got payback by making the Russian wait for almost a minute, pacing and puffing out his cheeks as the cameras rolled.

It was a powerful reminder that no PR visit could substitute for the political, economic, and military consequences of an invasion entering its sixth month.

And it was a marker that Putin’s only solace, as the Supreme Leader addressed him from a distance — with the Russian leader looking small in his chair beside a tiny sidetable — was in the embrace of a companion also isolated amid his bluster.