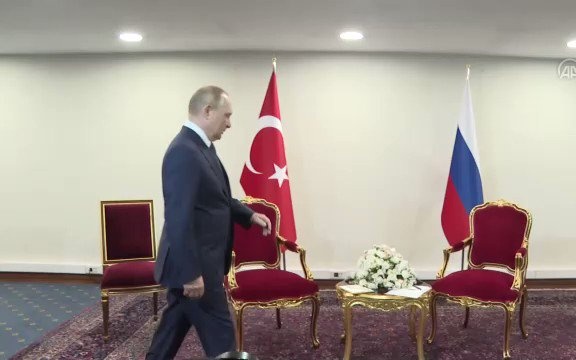 Video has been posted of a Ukrainian woman confronting Russian proxy officials as they try to force her husband to join their fighters.

With Russia suffering heavy losses in its operations in eastern Ukraine, the Russian proxy authority in the occupied parts of the Donbas region have stepped up forced conscription.

The woman says in the clip, filmed in late June, “He doesn’t want to go and fight. Nobody wants to fight. We are so sick of you and your war.”

The two sides met in Istanbul last week to discuss an initial draft resolving the issue, and they were expected to meet again this week.

But Putin said on Tuesday that international sanctions on Russia must be lifted before there is any easing of Moscow’s blockade.

Erdoğan told reporters as he returned Tuesday’s meetings with Putin and Iranian officials in Tehran, “This week we want this memorandum turned into a written text. We hope that the plan will start being implemented in the coming days.”

Russian attacks on Kharkiv in northeast Ukraine have killed three people, including a 13-year-old boy, on Wednesday morning.

A 72-year-old woman is injured.

For the fourth day in a row, Russian forces have bombarded Nikopol in the Dniepropetrovsk region in central Ukraine, killing two people and injuring nine on Tuesday.

Four children, the youngest three years old, are among the wounded.

Setting up a possible counter-offensive, Ukrainian forces have blown up a key bridge in the Russian-occupied Kherson region in southern Ukraine.

The bridge is one of two connecting Russian troops with their positions to the west of the Dnieper River, including Kherson city. UK military intelligence assesses that it is “likely usable” but “a key vulnerability for Russian forces”.

On 19 Jul 22, authorities in 🇷🇺-occupied Kherson reported that the Antonovskiy Bridge over the Dnieper River had been struck by 🇺🇦. Social media posts showed apparent battle damage to the bridge…👇 https://t.co/rn1quGbi5x

Putin met the Iranian and Turkish leaders on Tuesday in Tehran. The encounter was nominally part of the stalled Astana process over the 11 1/2-year Syrian uprising, in which Russia and Iran have propped up Bashar al-Assad but Turkey has sought a sphere of influence across the north of the country.

However, Putin’s sudden decision to go to Iran was also a PR attempt to show that he and Russia are not isolated, entering the sixth month of Ukraine invasion. Moscow’s forces failed in their initial objectives, such as the occupation of the capital Kyiv and the toppling of the Zelenskiy Government, and had to withdraw from the north of the country at the end of March. That gave much of the international community time to support Ukrainian resistance with weapons, economic aid, and sanctions on Moscow.

Russian forces have overrun some territory in southern Ukraine, and completed the occupation of Luhansk Province earlier this month. However, the offensive — having lost at least 30% of its combat effectiveness — may struggle to advance further, and the occupiers are facing Ukrainian attacks and an imminent counter-offensive in the south.

In his most detailed comments to date on Ukraine, the Supreme Leader absolved Putin of any responsibility over his invasion:

War is a harsh and difficult issue, and Iran is not at all pleased that ordinary people suffer from it, but in the case of Ukraine if you had not taken the initiative, the other side would have caused the war with its own initiative.

If the road is open to NATO, it knows no boundaries and if it was not stopped in Ukraine they would start the same war some time later under the pretext of Crimea.

Ayatollah Khamenei posed that Tehran and Moscow should cooperate to topple the US dollar as an international currency. However, amid serious economic problems for both countries, he offered no ideas how this would be accomplished.

Putin followed by saying he had acted in self-defense:

No one is in favor of war, and the loss of ordinary people’s lives is a great tragedy, but the behavior of the west made us have no choice but to react. Some European countries said “We were against Ukraine’s membership in NATO, but we agreed under American pressure,” which shows their lack of independence.

The headline achievement was the signature of a memorandum of understanding in which Russian companies will receive more than $4the 0bn to develop Iran’s oil and gas fields. However, even this has been overshadowed by competition between Moscow and Tehran for oil markets, as each tries to cope with international sanctions.

Putin did not fare as well with Erdoğan because of the dynamics of the Syrian conflict.

Facing Turkey’s own economic difficulties and seeking re-election next year, Erdoğan is threatening a renewal of cross-border military operations into Kurdish-held areas of northern Syria.

In August 2016, following a public reconciliation with Putin, Erdoğan launched the initial Turkey operations alongside anti-Assad factions. They evicted the Islamic State and then took the Kurdish canton of Afrin in northwest Syria.

In October 2019, incursions into Kurdish-controlled northeast Syria seized a corridor along the Turkish border, extending across the Euphrates and to the Iraqi frontier to the east.

Extending the Turkish sphere in 2022 would not only put further pressure on the Kurds, but also challenge the Russian-pledged Assad regime, which has insisted that it will regain “every inch” of Syria. The Kurdish area also has most Syrian oil and gas fields.

Instead of presenting agreement with Russia over the matter, Erdoğan launched a personal power play, making Putin wait for their meeting.

The tactic may also have been payback for Putin leaving Erdoğan outside a meeting room for several meetings before an encounter in Moscow in March 2020.

Erdoğan reinforced his position at the outset of the meeting with Putin and Iranian President Ebrahim Raisi. Saying it was “not possible to expect Turkey to sit idle and aloof from this problem”, he claimed a buffer zone 30 km (19 miles) deep was necessary across northern Syria.

Turkey has brokered talks between Kyiv, Moscow, and the UN, even as the Russians have expanded bombing and shelling of Ukrainian grain warehouses. After last week’s session in Istanbul, all sides said the negotiations were moving towards an agreement over the blockade.

In contrast to the clash with Erdoğan over Syria, Putin praised the Turkish leader over Ukraine.

I want to thank you for your mediation efforts. With your mediation, we have moved forward. Not all issues have yet been resolved, but the fact that there is movement is already good.

Without naming Turkey, Iran’s Supreme Leader also issued a warning to Erdoğan, as well as pushing disinformation about the US and the Kurdish-controlled oilfields.

Iran’s stance is opposition to a military attack on #Syria, & such an action should be prevented. Another important issue in Syria is the usurping of fertile, oil-rich regions to the east of the Euphrates by the Americans. This should be solved by expelling them from the region.

Khamenei told the Turkish President that Iran would cooperate in “fighting terrorism” but continued, “We consider the security of Turkey and its borders to be our security. You should also consider Syria’s security to be your own security. Syria’s issues should be settled through negotiations. Iran, Turkey, Syria & Russia should settle these issues through dialogue.”

Turkish media ignored the warnings. Instead, they seized upon a line in the joint statement by the three countries about “determination to continue their ongoing cooperation in order to ultimately eliminate terrorist individuals, groups, undertakings and entities.”

The outlets, connected to the Erdoğan Government, continued to jab at the Kurds by noting the “opposition to the illegal seizure and transfer of oil revenues that should belong to Syria” and the rejection of “all attempts to create new realities on the ground under the pretext of combating terrorism, including illegitimate self-rule initiatives”.