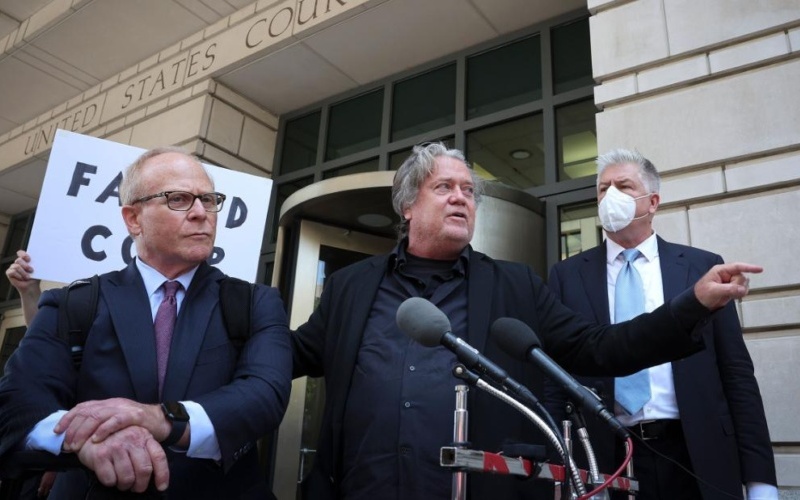 Steve Bannon, Donald Trump’s former chief strategist, poses outside the federal courthouse in Washington, DC before his trial for contempt of Congress (CNN)

On Friday, after a brief trial, Donald Trump’s advisor Steve Bannon was convicted of two counts of contempt of Congress. He is appealing the verdict, but faces up to two years in prison.

I spoke on Saturday morning with GB News about the significance of the conviction, not only for Bannon but also for Trump amid the House select committee hearings on the Capitol Attack.

Documents that Bannon withheld from the House committee on the Capitol Attack could detail his connections with right-wing militias, with Republican members of Congress involved in Trump’s coup attempt, and, of course, with Trump.

'Bannon pushed the idea the election would be stolen.'

ORIGINAL ENTRY, JULY 23: As the trial of Steve Bannon opens, I speak with Monocle 24’s Emma Nelson about the difficult situation for the far-right advisor to Donald Trump — and what it means for Trump’s own position, amid the failure of his coup attempt and his hope to return to the White House in 2025.

In a 10-minute analysis, I explain the two contempt of Congress charges against Bannon, over his refusal to testify to the House committee on the Capitol Attack, with a possible sentence of up to two years in prison. Then I walk through Bannon’s central role in the Trump plan to overturn the 2020 election, and what is next for the white nationalist agitator and his hope of tearing down the US system.

Bannon is not going to go quietly. But will he be constrained — first, because he is prison and second, does anyone really care about him anymore beyond a group entrenched on the far right of US politics?

And how big is that group that will accompany Bannon to prison and to hell and back?