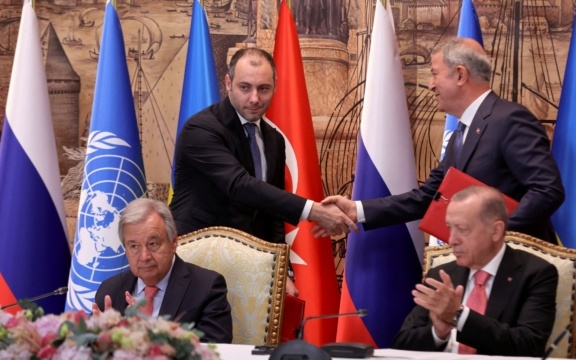 Ukrainian forces have struck a second key bridge in the Russian-occupied Kherson region in southern Ukraine.

The Ukrainians, preparing for a counter-offensive, are targeting Russian supply routes across the Dnieper River and its tributaries.

Serhiy Khlan, an advisor to the Ukrainian governor of Kherson, wrote, “Every bridge is a weak point for logistics and our armed forces are skilfully destroying the enemy system. This is not yet the liberation of Kherson but a serious preparatory step in that direction.”

The deputy head of the Russian occupation in Khersons said the bridge was hit by seven rockets from western-supplied High Mobility Artillery Rocket Systems.

Russia is drawing international condemnation for its missile strikes on Odesa.

The Secretary General unequivocally condemns reported strikes today in the Ukrainian port of Odesa. Yesterday, all parties made clear commitments on the global stage to ensure the safe movement of Ukrainian grain and related products to global markets. These products are desperately needed to address the global food crisis and ease the suffering of millions of people in need around the globe.

In our contact with Russia, the Russians told us that they had absolutely nothing to do with this attack and that they were examining the issue very closely and in detail.

The fact that such an incident occurred right after the agreement we made yesterday regarding the grain shipment really worried us.

However, we continue to fulfil our responsibilities within the agreement we made yesterday, and we also expressed in our meetings that we are in favour of the parties to continue their cooperation calmly and patiently here.

In Kyiv, President Volodymyr Zelenskiy said, “This proves only one thing: no matter what Russia says and promises, it will find ways not to implement it.”

The Ukrainian military says Russia has fired four Kalibr cruise missiles on the port of Odesa, a day after Moscow agreed to lift the blockade on Ukraine’s grain exports.

The military said two missiles were shot down but two hit port infrastructure.

Ukraine’s Foreign Affairs Ministry spokesperson Oleh Nikolenko said the strikes call into question the “agreements and promises” given by Russia to the UN and Turkey on Thursday.

Nikolenko called on the UN and Turkey to ensure Russia’s “compliance with its obligations within the framework of the safe functioning of the grain corridor”.

He added, “In case of failure to fulfill the agreements reached, Russia will bear full responsibility for the deepening of the global food crisis.”

The Ukraine Embassy in Ankara said in a statment:

It took less than 24 hours for the Russian Federation to launch a missile attack on Odessa port in order to question the agreements and promises made to the UN and Turkey in the document signed in Istanbul yesterday.

The Russian missiles fired at Odessa are basically like the spit of Vladimir Putin thrown in the faces of UN Secretary-General António Guterres and Turkish President Recep Erdoğan, who made great efforts to reach an agreement for which Ukraine is grateful.

Governor Andriy Raikovych said two security guards at an electricity substation were killed. One Ukrainian soldier was slain and ninewounded.

Raikovych added on Telegram that one district of the regional capital Kropyvnytskyi is without electricity.

The latest Russian shelling of Nikopol on the Dnipro River killed a 60-year-old woman.

The Russians have fired more than 250 rockets on the town in the past week, damaging homes and farm buildings, cutting off gas and water pipes, and destroying a railway track.

Russian authorities have launched a criminal investigation into Siberian city councillor Helga Pirogova, who is one of the last allies of opposition leader Alexei Navalny still in the country.

Pirogova, an independent member of the Novosibirsk council, is accused of “spreading disinformation” about the Russian military. She faces up to three years in prison if convicted.

The councillor publicly criticized Russia’s military intervention in Ukraine in social media posts. She wrote of the funerals of soldiers that she wanted to “revive” the troops to punish them for their role in Russia’s offensive and then “let them go back to their graves”. She later deleted the tweet, saying it was “too emotional”.

Pirogova said on Friday of the investigation, “They need an internal enemy that they can easily fight….I’d like to avoid this but what can you do.”

Earlier this month, a court ordered the detention of Moscow city councillor Ilya Yashin for two months. He faces up to 15 years in prison on the charge of spreading fake information about the military.

ORIGINAL ENTRY: Ukraine President Volodymyr Zelenskiy has hailed Friday’s deal to lift the Russian blockade of Ukrainian Black Sea ports, saying Kyiv has about $10bn worth of grain that can now be exported.

In his nightly address to the nation, Zelenskiy said, “This is another demonstration that Ukraine can withstand the war.”

From the first day of the full-scale invasion, Russia did everything to not just close Ukraine’s access to the sea, but to destroy the very potential of our exports – port infrastructure, our railways, warehouses and silos. We did not allow it.

And now we can not only restore the operation of our ports on the Black Sea, but also keep them protected.

He summarized, “About 20 million tonnes of last year’s grain harvest will be exported. And also it will be possible to sell this year’s harvest.”

Deputy Economy Minister Denys Kudin added, “We expect at least $1 billion a month for a certain period of time.”

In a ceremony in Istanbul, Ukraine and Russia signed parallel agreements with Turkey and the UN to lift the blockade, established by the Russians in the opening days of their February 24 invasion.

Ukraine vessels will escort grain ships through the Black Sea, with the Ukrainian Government providing maps of the location of mines. Russian forces will observe a truce. Turkey and the UN will carry out inspections of cargoes.

Ukraine supplies about 9% of the world’s wheat. About 25 million tons of grain have been blocked by the Russians, who have also destroyed storage facilities with missile and rocket strikes.

More than 100 ships have been stuck in Ukrainian ports since the start of the invasion. The majority are bulk cargo vessels.

Canadian Prime Minister Justin Trudeau maintained caution over the deal, “Canada’s confidence in Russia’s reliability is pretty much nil….They have demonstrated nothing but poor faith.”

However, he was “optimistic” that the grain will find its way “to places around the world where it is needed”.