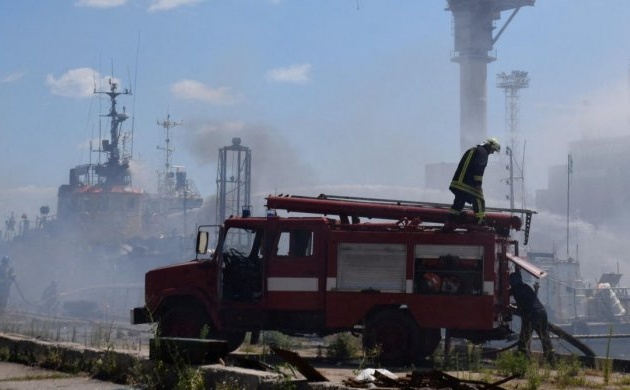 A Ukraine battalion commander says that Russian shelling in the Kharkiv region diminished by more than 90% after Ukrainian forces used a US-supplied medium-range rocket system to demolish an ammunition depot.

Dmytruk said, “We have about one guy suffer a concussion every week now. Before the HIMARS hit, it was about two to three a day because of the intensity of the shelling.”

However, Washington is limiting the despatch to see how the Ukrainians embed and use the HIMARS which are in the country.

Ukrainian Defense Minister Oleksii Reznikov said last Tuesday, “For an effective counteroffensive, we need at least 100. That would be a game-changer.”

Amid reports that Ukraine’s counteroffensive has regained villages in the Russian-occupied Kherson region in the south of the country, the Ukrainian military says it destroyed another Russian military supply point and ammunition depot.

The US-based Institute for the Study of War assesses in its latest report, “Ukrainian forces are likely preparing to launch or have launched a counteroffensive in Kherson Oblast as of July 23, but open-source visibility on the progress and tempo of the counteroffensive will likely be limited and lag behind events.”

A Ukrainian official in Kherson said forces have seized settlements, but called on civilians to remain silent about the progress of the counteroffensive until Ukraine’s authorities release official statements.

China’s Belt and Road Initiative investments in Russia have fallen to zero for the first time, as Beijing detaches itself from Moscow economically over Vladimir Putin’s invasion of Ukraine.

Beijing made no new deals with Russian entities in the first half of 2022, reported the Green Finance and Development Center of Shanghai’s Fudan University.

Russia and China signed BRI deals worth about $2bn in 2021.

Chinese financial institutions and corporations have been withdrawing from Russia since the invasion of February 24. In early June, telecommunications giant Huawei has begun closing retail outlets in Russia amid a drop in demand and a shortage of products in warehouses.

Two Americans, a Canadian, and a Swede have reportedly been killed in fighting in Ukraine.

The commander said the men, part of a special operations force based near Siversk in the Donetsk region in eastern Ukraine, died on July 18.

Siversk is near the frontline as Russia’s offensive, having occupied all of the neighboring Luhansk region, tries to advance in Ukrainian areas of Donetsk.

The men’s unit was deployed to the village of Hryhorivka, two miles northwest of Siversk, to clear a ravine where Russian forces were trying to cross a river. Miroshnichenko said:

They did it successfully. But at the end of the mission they were ambushed by Russian tanks. The first shell injured Luke. Three guys, Edward, Emile, and Bryan, they immediately attempted to help Luke, to do first aid, and evacuate him from this spot. Then the second shell killed them all.

On Friday, a US State Department spokesman said two Americans had recently died in the Donbass, but he did not release their names.

Governor Pavlo Kyrylenko said one person was killed in Avdiivka and another in Toretsk, with transport infrastructure hit in the industrial city of Kostyantynivka.

In northern Ukraine, a 69-year-old farmer was killed in the village of Bilopillia amid 12 Russian attacks on the Sumy region.

ORIGINAL ENTRY: Less than 12 hours after signing a deal to lift its blockade of Ukraine’s grain exports, Russia fired missiles on the Black Sea port city of Odesa on Saturday.

The Russians launched four Kalibr cruise missiles. Two were downed by Ukrainian defenses, while two struck the city of about 1 million people. Video showed one exploding close to the seafront, behind rows of containers and not far from a docked vessel.

The strikes hit a pumping station, said Serhii Bratchuk, spokesman for the Odesa military administration. He said the grain storage area, holding part of the 25 million tons of grain blocked by the Russians, was not affected.

On Friday, Ukraine and Russia signed parallel agreements with Turkey and the UN to lift the Russian blockade on the ports, established in the opening days of the February 24 invasion. Ukraine vessels will escort grain ships through the Black Sea, with the Ukrainian Government providing maps of the location of mines. Russian forces are to observe a truce, as Turkey and the UN carry out inspections of cargoes.

In a virtual meeting with US legislators, Ukraine President Volodymyr Zelenskiy described the attack as Russian “barbarism”: “This proves only one thing: no matter what Russia says and promises, it will find ways not to implement it.”

The international community joined the criticism and concern. A UN spokesperson said:

The Secretary General unequivocally condemns reported strikes today in the Ukrainian port of Odesa. Yesterday, all parties made clear commitments on the global stage to ensure the safe movement of Ukrainian grain and related products to global markets. These products are desperately needed to address the global food crisis and ease the suffering of millions of people in need around the globe.

In our contact with Russia, the Russians told us that they had absolutely nothing to do with this attack and that they were examining the issue very closely and in detail.

The fact that such an incident occurred right after the agreement we made yesterday regarding the grain shipment really worried us.

He called on Ukraine and Russia “to continue their cooperation calmly and patiently here”.

US Secretary of State, Antony Blinken said in a statement, “This attack casts serious doubt on the credibility of Russia’s commitment to yesterday’s deal. Russia bears responsibility for deepening the global food crisis and must stop its aggression.”

Other Russian missile attacks included a strike on the city of Kropyvnytskyi in central Ukraine. At least two security guards and one soldier were killed and 13 people were wounded by 13 missiles targeting an airbase and a railway substation.

At least three civilians were slain in Kharkiv, and the southern city of Mykolaiv was bombed again.