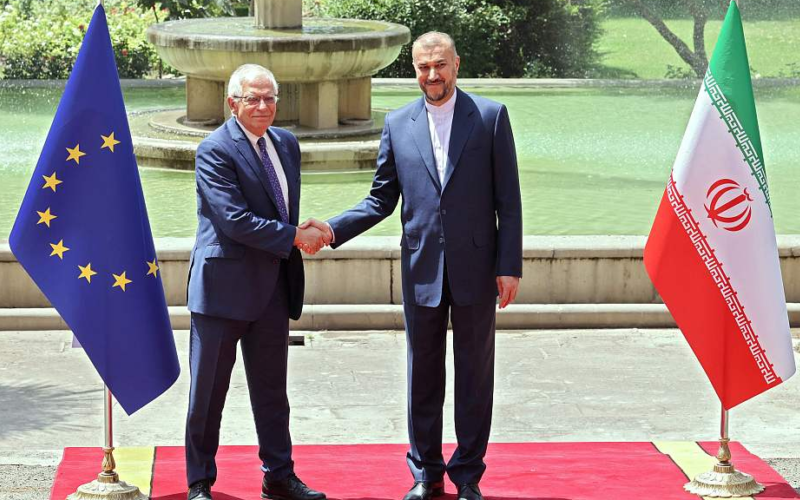 Brett McGurk, the Biden Administration’s Middle East coordinator, told specialists last week that it is “highly unlikely” the 2015 Iran nuclear deal will be renewed in the near future.

Three sources on the call said McGurk blamed the Iranian side, saying it was unable to make a decision. He speculated that Iran wants the US “to add something to the pot” to help those who want a deal in an internal debate with the Supreme Leader.

McGurk explained that the Administration will use sanctions and diplomatic isolation against Iran, “but not needlessly escalate the situation”. Force is a last resort.

European Union foreign policy chief Josep Borrell said on Tuesday that he has proposed a new draft text to revive talks over the renewal of the 2015 Iran nuclear deal.

I have now put on the table a text that addresses, in precise detail, the sanctions lifting as well as the nuclear steps needed to restore the JCPOA [Joint Comprehensive Plan of Action]….

After 15 months of intense, constructive negotiations in Vienna and countless interactions with the JCPOA participants [Iran, UK, France, Germany, China, Russia] and the US, I have concluded that the space for additional significant compromises has been exhausted.

Borrell gave no details. Nor did he refer to the US designation of Iran’s Revolutionary Guards as a “foreign terrorist organization”, the issue that has stalled the talks since March.

Iran’s lead nuclear negotiator, Ali Baqeri Kani confirmed Borrell’s proposal, “We, too, have our own ideas, both in substance & form, to conclude the negotiations which would be shared.”

US State Department spokesman Ned Price said the Biden Administration is reviewing Borrell’s “draft understanding” and will respond directly to the EU.

Borrell reiterated that time is short to conclude an agreement, “If the deal is rejected, we risk a dangerous nuclear crisis, set against the prospect of increased isolation for Iran and its people.”

The EU’s Enrique Mora, the broker of the talks, added:

The best possible deal for all the parties is on the table. It ensures clear, measurable economic benefits for the Iranian people and verifiable non proliferation benefits for the international community. I invite all participants to take the last step.https://t.co/DGUGyhtpzm

Has Iran withdraw its condition that the US lift its designation of the Revolutionary Guards as a “foreign terrorist organization”, an issue stalling the nuclear talks since March?

Tehran University’s Seyed Mohammad Marandi, a de facto spokesman for Iran’s nuclear negotiators, has told Iranian media that the Guards’ designation — imposed by the Trump Administration in 2018 — “has never been a precondition”. He insisted that the American side had said them to stall over the talks.

In a Monday night conversation with European Union foreign policy chief Josep Borrell, Iranian Foreign Minister Hossein Amir-Abdollahian did not mention the Revolutionary Guards. Instead, he declared, “There is no doubt about the Islamic Republic of Iran’s determination to reach a good, strong and lasting agreement,” while maintaining that “the United States must set aside its extravagant demands and instead take realistic steps”.

The Biden Administration’s Iran envoy says failed talks in Qatar over the Iranian nuclear program were a “wasted opportunity“.

Indirect discussions between the US and Iran sought a breakthrough over US re-entry to the 2015 nuclear deal, lifting of American sanctions on Tehran, and an Iranian return to compliance with the terms, including over the enrichment of uranium.

But Robert Malley said Tuesday that Iran “added demands that I think anyone looking at this would [agree] have nothing to do with the nuclear deal, things that they’ve wanted in the past, that clearly [we] and Europeans and others have said, ‘That’s not part of this negotiation.’”

Malley added that the US and other Western powers — including the UK, France, and Germany, all parties to the 2015 deal — are concerned that Iran is” much closer to having fissile material for a bomb”:

To our knowledge, they have not resumed their weaponization program, which is what they would need to develop the bomb. But we are of course alarmed, as are our partners, at the progress they’ve made in the enrichment field.

He continued: “The discussion that really needs to take place right now is not so much between us and Iran, although we’re prepared to have that. It’s between Iran and itself. They need to come to a conclusion about whether they are now prepared to come back into compliance with the deal.”

If we want to conclude an agreement, decisions are needed now.

This is still possible, but the political space to revive the #JCPOA may narrow soon.

Iranian Foreign Minister Hossein Amir-Abdollahian maintained, after the discussion with Borrell, that Iran is ready to negotiate a strong and durable agreement. He said it is up to the US to make a political decision, adding that an agreement is possible “only based on mutual understanding and interests”.

Having recovered more than 10% of its value on the eve of the Qatar talks, Iran’s currency has lost almost all of the gains.

A “senior US official” says the prospects of a revived nuclear deal after this week’s indirect US-Iran talks in Qatar.

The European Union Ambassador to the UN, Olof Skoog, also pointed to a lack of progress, “I am concerned that we might not make it over the finishing line. My message is: Seize this opportunity to conclude the deal, based on the text that is on the table.”

Showing its worry over evolving links between Israel and Arab States — and over the economic consequences of collapsed talks — Iran maintained that the negotiations were “serious and positive”.

But as they heard the Secretary General’s latest report on Iran’s nuclear program, other ambassadors were sceptical.

UK Ambassador Barbara Woodward said Tehran”should urgently take this deal — there will not be a better one.”

US Deputy Ambassador Richard Mills said, “Iran has yet to demonstrate any real urgency to conclude a deal, end the current nuclear crisis, and achieve important sanctions lifting.”

And France’s Nicolas de Riviere was even more critical, “Not only has Iran not taken up the offer on the table, but it also added yet more issues which fall outside the JCPOA [Joint Comprehensive Plan of Action] with maximalist and unrealistic demands.”

Indirect talks between the US and Iran over a renewal of the 2015 nuclear deal ended without any progress on Wednesday in Qatar.

Two intense days of proximity talks in Doha on #JCPOA. Unfortunately, not yet the progress the EU team as coordinator had hoped-for. We will keep working with even greater urgency to bring back on track a key deal for non-proliferation and regional stability @JosepBorrellF pic.twitter.com/eA1Wluif01

A US State Department spokesperson said Iran “failed to respond positively to the EU’s initiative and therefore…no progress was made.”

The spokesperson said that “Iran raised issues wholly unrelated” to the nuclear agreement and “apparently is not ready to make a fundamental decision on whether it wants to revive the deal or bury it”.

Iran Foreign ministry spokesman Naser Kanani said Tehran’s lead negotiator, Deputy Foreign Minister Ali Bagheri Kani, and Mora “will be in touch about continuing the path and the next stage of the talks”.

The Iran nuclear talks will resume, af:r a suspension of almost four months, in the Qatari capital Doha on Tuesday. Indirect US-Iran discussions will be brokered by the European Union.

#Iran’s chief negotiator @Bagheri_Kani has arrived in Doha for the resumption of the #IranTalks. pic.twitter.com/24Q4gZq5M4

Iranian Foreign Ministry spokesperson Saeed Khatibzadeh said on Monday that talks over Iran’s nuclear program will resume in a “Persian Gulf country” — which Iranian outlets have identified as Qatar — within the next days.

“The time and venue of negotiations have been almost determined,” Khatibzadeh said, “The final decisions in this regard will be made soon.”

A “European diplomat” has also said, following Saturday’s meeting between Iranian Foreign Hossein Amir Abdollahian and European Union foreign policy head Josep Borrell, that the discussions will be in Qatar.

ORIGINAL ENTRY, JUNE 26: Iran’s officials say talks for a revival of the 2015 nuclear deal, stalled since March, will soon resume.

Foreign Minister Hossein Amir-Abdollahian said, after discussions with European Union foreign policy Josep Borrell in Tehran on Saturday, “We are ready to resume the Vienna talks within the next days.”

The Vienna process began in April 2021 between Iran and the remaining 5+1 Powers (UK, France, Germany, China, and Russia) over US re-entry to the deal, the lifting of American sanctions on Tehran, and an Iranian return to compliance.

The discussions were close to resolution in February. However, they were complicated by Iran’s demand that the US removed the Revolutionary Guards — which Washington says is involved in destabilizing operations throughout the Middle East — from its list of foreign terrorist organizations. Tehran has also stepped up its refusal to cooperate with inspectors of the International Atomic Energy Agency on certain issues over the nuclear program.

Amir-Abdollahian said he had “detailed, precise and deep” negotiations with Borrell: “We are going to break the stalemate in the Vienna talks and end the tension that has existed in recent days.” He expressed hope that the US would “this time” pursue a “realistic and fair approach” and act responsibly.

He added, “What is important for the Islamic Republic of Iran is that it should completely enjoy all the economic benefits [stipulated] in the 2015 agreement.”

Iran’s economy, with long-standing difficulties, is under further pressure after the suspension of the talks. Amid protests across the country, the rial dropped to a historic low against the US dollar.

Upon news of the possible revival of talks, the rial regained 3% of its value on Sunday, reaching 313,800:1 against the US dollar.

Nour News, affiliated with Iran’s Supreme National Security Council, said the next round of talks may be in Qatar rather than in Vienna.

The Qatari Government has served as a broker between Iran and other countries in an effort to break the stalemate in the discussions.

In a posture of strength, Iran carried out a second test of its Zuljanah satellite launcher on Sunday.

The US claims the long-range ballistic technology putting the satellites into orbit could also be used to launch nuclear warheads.

The Zuljanah has three stages and uses a combination of solid and liquid fuels.

“The third development phase of the Zuljanah satellite launcher will be based on a combination of information gained during today’s launch,” a Defense Ministry spokesperson said.