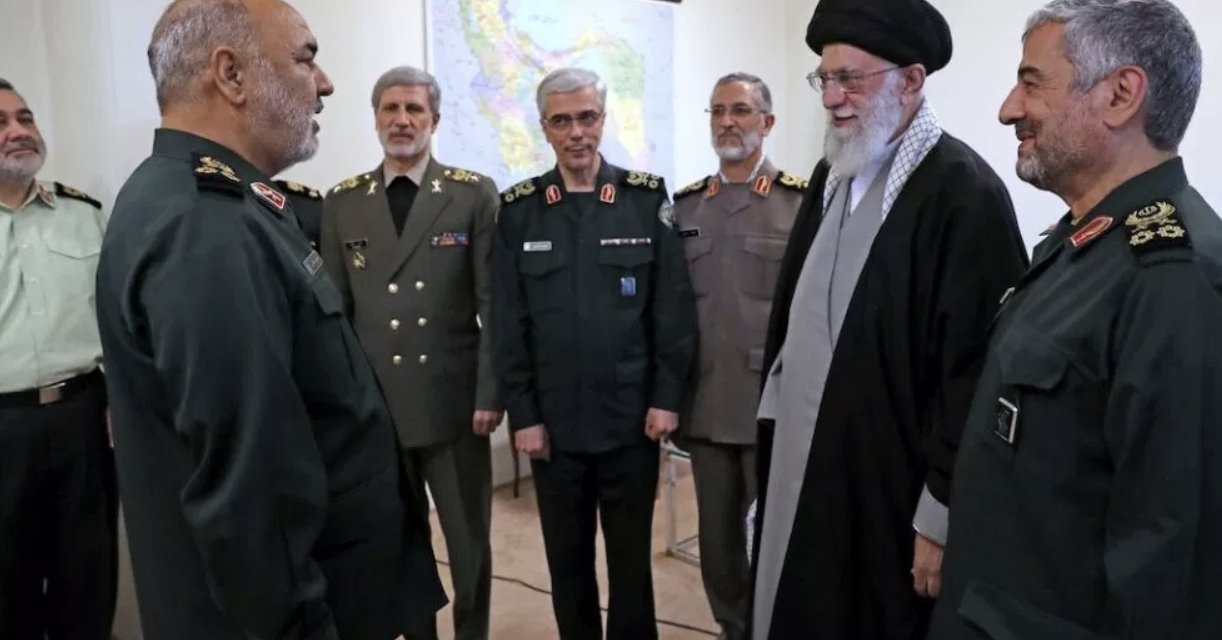 The US is holding off on a counter-proposal to Iran for a final resolution of a revised nuclear deal, because of Tehran’s demand that the Revolutionary Guards be removed from an American list of foreign terrorist organizations.

A “senior Biden Administration official” said, “The President has made clear he’ll do what’s in the best interest of U.S. security. And the onus here is really on Iran at this stage, particularly on this issue.”

The US was expected to respond earlier this month to an Iranian proposal brought to Washington by the European Union’s broker of the talks, Enrique Mora, in late March.

A “source close to the talks” assessed, “I think it is the political side of the administration that is reluctant to pay the price and is not fully aware of the medium term political and long term strategic costs of allowing the deal to collapse.”

A “senior administration official” says the US will not remove Iran’s Islamic Revolutionary Guards Corps from the US list of foreign terrorist organizations, even if it puts renewal of the 2015 nuclear deal “in jeopardy”.

“The onus is on Iran as to whether we have a nuclear deal. The President will stick to core principles. The Iranians know our views,” the official said.

Asked in a TV interview if the Revolutionary Guards are a terrorist organization, Secretary of State Antony Blinken reiterated, “So, they are.”

He said, “I’m not overly optimistic at the prospects of actually getting the agreement to conclusion.”

And on Thursday before the Senate Armed Services Committee, Joint Chiefs of Staff chairman Gen. Mark Milley said of the Guards’ branch for foreign operations, “In my personal opinion, I believe the IRGC Quds Force to be a terrorist organization, and I do not support them being de-listed.”

An Israeli official said Prime Minister Naftali Bennett welcomes the US position but understands that it may not ultimately prevent an agreement over the nuclear deal between Iran, the US, and the other 5+1 Powers (UK, France, Germany, China, and Russia).

European Union foreign policy head Josep Burrell, who was optimistic last weekend about a renewal of the 2015 Iran nuclear deal, now says the Vienna talks are stalled by Iranian obstruction.

Burrell said on Monday that, having overcome a Russian ultimatum about US sanctions over Moscow’s war on Ukraine, the negotiations faced Iran’s demand for the removal of the Revolutionary Guards from a US list of foreign terrorist groups.

“The JCPOA [Joint Comprehensive Plan of Action] is not getting to an end,” Borrell told the European Parliament. “It would be a shame not to reach some sort of an agreement when we’re so near to reaching one. But I cannot guarantee that we will reach an agreement.”

Borrell had golds reporters on the sidelines of Qatar’s Doha Forum last weekend that an agreement could happen in “a matter of days”.

There was no apparent movement in Sunday talks between the European Union’s Enrique Mora and senior Iranian officials in Tehran.

The lack of a political decision on the part of the United States to remove the sanctions that are tied to economic benefit of the Iranian people is the existing obstacle hindering achievement of a final outcome.

For us, availing ourselves of the full economic benefits and effective removal of sanctions are top priorities.

ORIGINAL ENTRY: The US must remove the Islamic Revolutionary Guards Corps from its terrorist list for any renewal of the 2015 nuclear deal, say Iran’s officials.

Foreign Minister Hossein Amir-Abdollahian set the precondition in a Saturday interview, facing a further question mark over a resolution.

Iran's FM Amir-Abdollahian confirmed in an interview today that Tehran's demand for the IRGC to lose its FTO designation is a sticking point in efforts to revive the nuclear deal.

He said the IRGC's "role & standing" as "the most important security apparatus" can't be ignored. pic.twitter.com/phtpBd9KFy

Having withdrawn from the nuclear deal in May 2018 and imposed comprehensive sanctions on Iran in November 2018, the Trump Administration designated the Revolutionary Guards as a foreign terrorist organization in April 2019. The step imposed further sanctions on the IRGC, first listed by the US Treasury in 2007 over its involvement in Iran’s nuclear program.

The 2019 designation threatened both the Guards and individual commanders, given the organization’s expanding stake in Iran’s economy. The IRGC has a majority stake in many companies that were “privatized” since 2005, and also has a significant role in black-market smuggling and transactions./p>

The Vienna nuclear talks were nearing completion in February, but were then set back by Russia’s invasion of Ukraine. Russia — one of the 5+1 Powers alongside the US, UK, France, Germany, and China — said a deal must include the lifting of American sanctions imposed on Moscow over its assault.

After criticism by Iran, Russia stepped back from the ultimatum, revising its demand to only those sanctions affecting the Russian role in Iran’s nuclear programs and implementation of the Joint Comprehensive Plan of Action.

With the European Union’s broker of the talks, Enrique Mora, in Tehran on Sunday, the EU’s foreign policy chief Josep Borrell had restated his hope that a deal is imminent.

The negotiations are seeking US re-entry, the lifting of American sanctions, and Iran’s return to compliance, including the rollback of enrichment of 20% and even 60% enriched uranium.

A Dispute Within Tehran

But while Amir-Abdollahian’s statement appeared to back the Guards, the IRGC was upset by the Foreign Minister’s addendum that the Guards were not demanding the sanctions removal if it jeopardized an outcome.

Amir-Abdollahian said that the IRGC's top brass "selflessly" told Iranian negotiators not to hinge the talks on its delisting if an agreement is within reach.

He said, however, that Iran won't "walk past" the IRGC's delisting & sees it as integral as other unresolved issues. pic.twitter.com/iasGILjxRe

The editor of the hardline Kayhan paper slammed Adollahian in an interview with the Guards outlets Fars. Hossein Shariatmdari, appointed by the Supreme Leader, said the Foreign Minister’s statement did not represent Tehran’s position and urged the IRGC leadership to reject Amir-Abdollahian publicly.

The Foreign Minister subsequently backtracked, saying his comments were misinterpreted: he did not mean that red lines can be compromised.

Meanwhile, both US Secretary of State Antony Blinken and the Biden Administration’s Iran envoy Rob Malley said that while the terrorist designation of the IRGC might be lifted, the other US sanctions on the organization will remain.

Speaking to the Doha Forum in Qatar on Saturday, Malley said, “I can’t be confident [a deal] is imminent… A few months ago we thought we were pretty close as well.”

The statement contrasted with that of Kamal Kharrazi, a former Iranian Foreign Minister who is now a senior advisor to the Supreme Leader: “Yes, it’s imminent. It depends on the political will of the United States.”