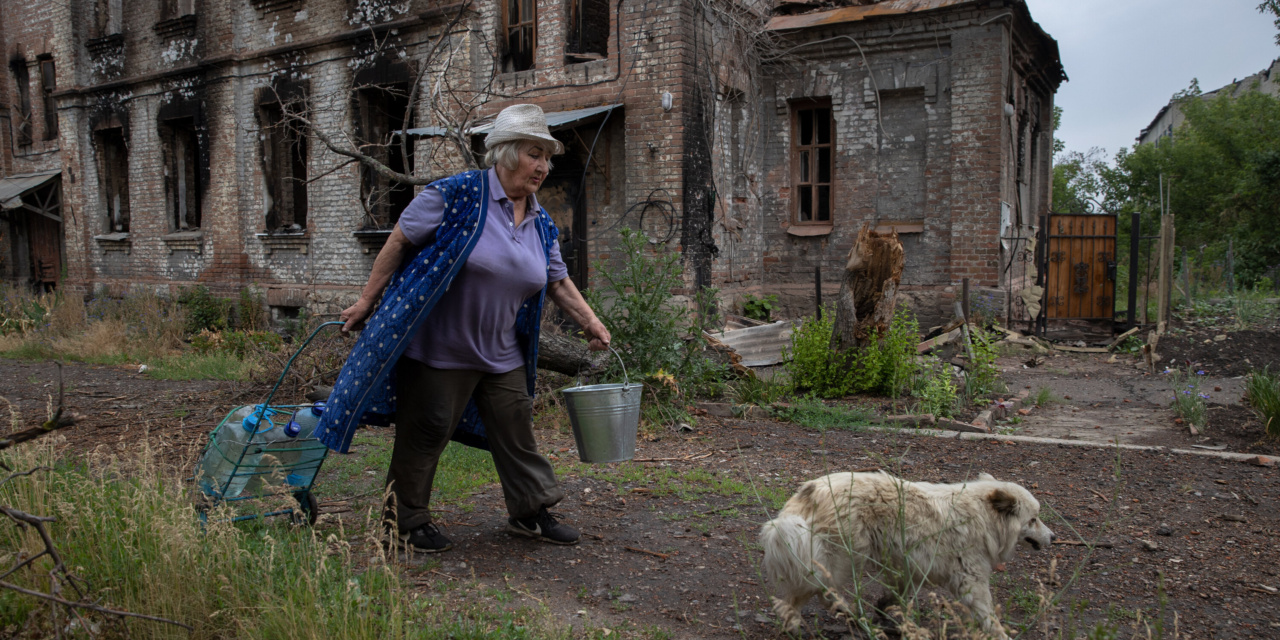 Monday’s Coverage: Russia “Throws Almost All Forces” Into Last-Gasp Offensive in the East 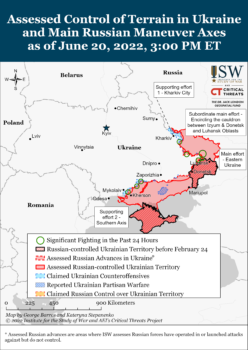 The US State Department has confirmed the death of a second American citizen resisting the Russian invasion of Ukraine.

The Ukraine military say Russian forces have occupied the village of Toshkivka near Sievierodonetsk in the Donbas region.

The head of the Sievierodonetsk district military administration, Roman Vlasenko, said the battle is “now in full swing” for the Donbas, “the epicenter of fighting between Ukraine and the Russian army”.

Toshkivka is about 15 miles south of Sievierodonetsk.

Russian officials says Russian-occupied drilling rigs in the Black Sea are still on fire, claiming they were attacked by Ukrainian forces on Monday.

The rigs were seized in 2014 as Russia occupied the Crimea Peninsula.

Luhansk Governor Serhiy Haidai says Russian forces have struck a checkpoint of the Azot chemical plant in the industrial area of Sievierodonetsk.

Haidai said 568 civilians, including 38 children, are still in an underground shelter at the chemical works. Most are plant employees and their families.

He added that doctors are still working in one of the hospitals in Sievierodonetsk.

The assessment noted that Ukrainian forces sank a Russian naval tug delivering weapons and personnel to Snake Island last week. The attack was the first successful use of a Harpoon anti-ship missile, part of international military aid to Ukraine.

The report concluded that Ukraine’s defense “has undermined the viability of Russia’s original operational design for the invasion, which involved holding the Odesa region at risk from the sea”.

Russian shelling has destroyed a school in the town of Adviivka in the Donetsk oblast in eastern Ukraine.

Governor Pavlo Kyrylenko said, “This is the third school destroyed by the Russians in Avdiivka. In total, the invaders destroyed about 200 schools in the Donetsk region.”

The deputy director of the Danish Energy Agency, Martin Hansen, said, “This is a serious situation we are facing and it has been exacerbated by the reduction in supplies.”

The agency said stocks are about 75% full “and gas has been added in recent days”.

The Netherlands announced Monday that it will lift restrictions on coal-fired power generation, a day after similar steps by Germany and Austria.

Dmitry Muratov, the editor of the Russian independent newspaper Novaya Gazeta, has auctioned his Nobel Peace Prize medal for $103.5 million, with the money going to Ukrainian child refugees.

The amount shattered the record of $4.76 million for a Nobel medal, set in 2014 by the sale of the 1962 award to James Watson, the co-discoverer of the structure of DNA.

Muratov and Philippine journalist Maria Ressa were the joint recipients of the Nobel Peace Prize last October for their investigative reporting and advocacy of press freedom.

Novaya Gazeta was forced to suspend operations in March because of the threat by Russian authorities of up to 15 years in prison for reporting on the invasion of Ukraine.

Muratov told Reuters when the auction was announced, “My country invaded another state, Ukraine. There are now 15.5 million refugees….We thought for a long time about what we could do…and we thought that everyone should give away something dear to them, important to them.”

The court upheld the finding that Meta Platforms is guilty of “extremist activity” in Russia.

Meta’s WhatsApp service was not banned in March, and Russians can reach the other platforms through virtual private networks.

The Kremlin has acknowledged that Russian proxies are holding two US prisoners of war in eastern Ukraine.

Spokesman Dmitry Peskov said Andy Huynh and Alexander Drueke, both from Alabama, are “mercenaries” who should take responsibility for their “crimes”. He insisted that they have no rights under the Geneva Convention.

The spokesman “couldn’t rule out” that they might face execution.

Peskov denied that US basketball star Brittney Griner, seized a week before the invasion of Ukraine, is detained for any reason other than alleged possession of hashish oil.

Moscow is demanding that Lithuania lift a ban on the movement of some goods from Russia to the Russian exclave of Kaliningrad on the Baltic Sea.

The Russian Foreign Ministry summoned Lithuania’s envoy in Moscow to declare that unless transit is quickly restored, Russia will act to protect its interests. It will summon the European Union ambassador to Moscow, Markus Ederer, on Tuesday.

Kremlin spokesperson Dmitry Peskov said the situation as “more than serious” and “a violation of everything”.

Lithuanian authorities say they are only implementing an EU sanctions list on goods — coal, metals, construction materials and advanced technology — such as transported across its territory, including the only rail route between mainland Russia and Kaliningrad.

Kaliningrad’s governor Anton Alikhanov says the ban could affect up to half of all goods brought by rail to the enclave.

ORIGINAL ENTRY: Stymied for weeks in its attempts to overrun a city in eastern Ukraine, Russia has gathered almost all of its available forces for a “victory” in its last-gasp offensive in the Donbas.

Amplifying the remarks of regional officials — and the assessments of the US-based Institute for the Study of War and of UK military intelligence — Ukraine Deputy Defense minister Hanna Maliar said on Monday that there will be “decisive” battles for Sievierodonetsk, one of the last two cities held by Ukraine in the Luhansk obast.

Maliar said Russian leaders are trying to establish their control of the city and to reach the borders of Luhansk by June 26.

After failing in the initial phases of Vladimir Putin’s invasion and withdrawing from northern Ukraine, Russian forces have concentrated since early April on an offensive in the Luhansk and Donetsk oblasts, trying to expand the area held by Russian proxies since 2014.

Last month, the offensive moved into most of Sievierodonetsk, but Ukrainian defenders continue to hold part of the city, including the industrial area. The defenders have regained areas in the center — often block by block, and even house by house — in street fighting, but then face Russia’s artillery barrages and bombing.

The Russian army has thrown virtually all its forces and means in order to storm the settlements around [Sievierodonetsk]. They seek to break through the defenses of our troops and are trying to encircle the grouping of our troops, which is carrying out the defense of [the nearby city of] Lysychansk and Sievierodonetsk.

She said the defenders are doing “everything possible” to prevent encirclement of Sievierodents, she said, “but we must understand that the enemy has an advantage in armament, so the situation is extremely difficult now, and at night and today, there is a maximum intensity of these decisive battles”.