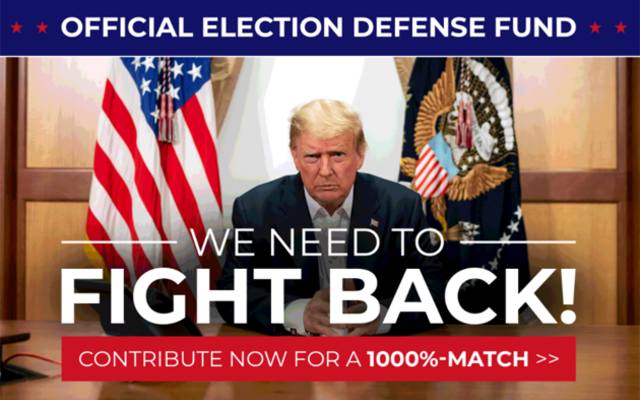 Donald Trump used the myth of a “stolen election” not only to try and cling to power, inciting the attack on the US Capitol on January 6, 2021 — he also employed it to bilk $250 million from his supporters.

On the day after the November 2020 election, the Trump camp sent out an e-mail to supporters:

Friend, the Democrats are trying to STEAL the Election. I’ve activated the Official Election Defense Fund and I need EVERY PATRIOT, including YOU, to step up and make sure we have enough resources to PROTECT THE INTEGRITY OF OUR ELECTION.

For the next nine weeks, up to 26 minutes before the Capitol Attack trying to block the Congressional certification of President-elect Joe Biden, Trump’s staff sent up to 25 e-mails each day. They were in the names of Trump; his sons Donald Jr. and Eric; Vice President Mike Pence; former House Speaker Newt Gingrich; and Republican National Committee chair Ronna McDaniel.

The messages appealed to supporters to “defend our democracy” and prevent the “Radical Left” from “DESTROYING America”. They called for help in swing states like Michigan, even after judges threw out baseless complaints.

But there never was an “Official Election Defense Fund”, former Trump campaign aides Hannah Allred and Gary Coby confirmed in testimony to the House committee investigating the Capitol Attack.

Instead, the money went to Trump’s Save America Political Action Committee. From there it was handed out to Trump’s hotels and to the company organizing the January 6 rally just before the Capitol Attack.

The PAC also distributed money to the charity of White House Chief of Staff Mark Meadows and to a conservative organization employing former Trump staffers.

"The Trump campaign knew these claims of voter fraud were false, yet they continued to barrage small dollar donors with emails encouraging them to donate to something called the Official Election Defense Fund. The Select Committee discovered no such fund existed." #January6th pic.twitter.com/tDXYCt604s

David Becker, executive director of the Center for Election Innovation and Research, summarized:

We now know that Donald Trump was told repeatedly by his own family, cabinet and staff that his claims about a stolen election had no merit, and yet he continued to use those claims to raise money.

He was selling false claims to his supporters. The money they gave was not even being used for what he said it would be used: fighting the election in court.