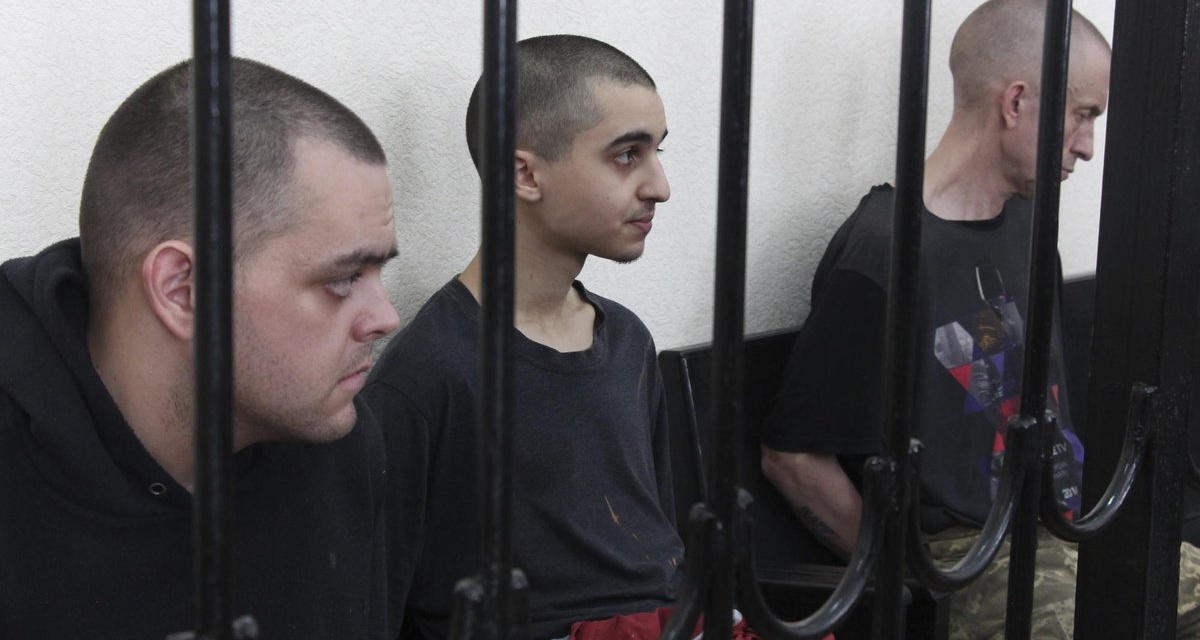 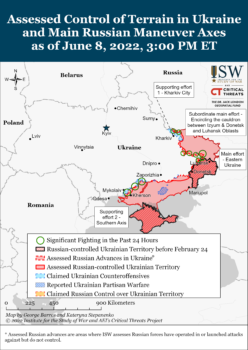 Boychenko said wells have been contaminated by the corpses of victims of the Russian bombardment and siege.

They have not cleared the bodies of those they killed in the bombings. Many bodies are still under the ruins. The problem is compounded by the absence of garbage collection – the system hasn’t been functioning since February….

The resulting mix [from the bodies and lack of adeuquate sewage systems] flows towards rivers and wells, where people draw and use it. This water is already poisoned. It has already propagated throughout the city. The occupation authorities bring water to the city, but not enough. People still go to the wells and take that poisoned water.

About 100,000 civilians remain in the devastation of Mariupol, which had a pre-invasion population of about 430,000.

The Kremlin has officially distanced itself from the death sentences on two UK and 1 Moroccan nationals.

At the moment, the trials you mentioned are being held on the basis of the legislation of the [Russian proxy] “Donetsk People’s Republic”, because the crimes in question were committed on the DPR’s territory.

I will not comment on the “Donetsk People’s Republic” judiciary.

Saying the UK reaction to the threatened executions is “hysterical”, Foreign Ministry spokesperson Maria Zakharova said London should appeal to the DPR.

A “western official” says up to 20,000 Russian troops have been killed during Vladimir Putin’s war on Ukraine.

He noted, “That is a change from our previous figure that we have been talking about in excess of 15,000 before.”

They are 100 plus days into a bitter conflict with significant fatalities and casualties on both sides. They will of course be facing morale issues.

But the Ukrainians are fighting for their homeland and they are in largely well dug-in defensive positions so they have the advantage over Russians in that regard.

Despite the ongoing barrage, “there was no advance of the enemy on the line of contact”, the governor said, with “the enemy…focused on defense” near Kharkiv and regrouping in the Izyum area.

Russia’s Industry Ministry expects car sales to drop 51% in 2022 because of supply issues.

Tigran Parsadanyan, deputy head of the Ministry’s automotive and railway engineering department, said, “We saw a sharp fall in April and May. We expect that some 750,000 cars will be sold on the market by the end of the year.”

Supporting claims by Ukrainian officials, UK military intelligence assesses that Russia is struggling to provide basic public services in Russian-occupied southern Ukraine, with the port city of Mariupol at risk of a major cholera outbreak because of lack of safe drinking water.

The report also cites “major disruption to telephone and internet services” and a likely critical shortage of medicines in Kherson.The analysts add, “Medical services in Mariupol are likely already near collapse. A major cholera outbreak will exacerbate this further.”

The family of Aiden Aslin, sentenced to death by Russian proxies in eastern Ukraine on Thursday, has issued a statement.

We love Aiden with all our hearts. He and Shaun as members of Ukrainian armed forces should be treated with respect just like any other prisoners of war.

They are not, and never were, mercenaries.

We hope that this sentence will be overturned, and beseech the governments of the UK and Ukraine to do everything in their power to have them returned safely to us, and soon.

Ukraine President Volodmyr Zelenskiy said last week that, amid the Russian offensive in eastern Ukraine, the Ukrainian army was losing 60 to 100 soldiers a day.

This is an artillery war now, and we are losing in terms of artillery.

Everything now depends on what [the west] gives us. Ukraine has one artillery piece to 10 to 15 Russian artillery pieces. Our western partners have given us about 10% of what they have….

We have almost used up all of our [artillery] ammunition and are now using 155-calibre Nato standard shells. Europe is also delivering lower-calibre shells but as Europe runs out, the amount is getting smaller.

Vladimir Putin has publicly spoken of his quest to conquer Ukraine and make it part of “greater Russia”.

In televised comments, Putin used a historical allusion after visiting an exhibition about Russia’s 18th-century tsar Peter I:

Peter the Great waged the great northern war for 21 years. It would seem that he was at war with Sweden, he took something from them. He did not take anything from them, he returned [what was Russia’s].

Apparently, it also fell to us to return [what is Russia’s] and strengthen [the country]. And if we proceed from the fact that these basic values form the basis of our existence, we will certainly succeed in solving the tasks that we face.

Ukraine officials and commanders say they have made block-by-block, house-by-house advances in street fighting in Sievierodonetsk, despite a redeployment because of the intense Russian shelling and bombing of the city in eastern Ukraine.

Ukraine President Volodymyr Zelenskiy said, “Sievierodonetsk, Lysychansk, and other cities in Donbas, which the occupiers now consider key targets, are holding on.”

Luhansk governor Serhiy Haidai said, “If we quickly get western long-range weapons, an artillery duel will begin, the Soviet Union will lose to the west, and our defenders will be able to clean up Sievierodonetsk in two or three days.”

Aiden Aslin, Shaun Pinner, and Ibrahim Saadun were condemned on charges of “terrorism” after a three-day process in a Russian-controlled part of the Donetsk region.

A Russian proxy official said the men, who were captured when Russian forces overran the port city of Mariupol in southern Ukraine, have one month to appeal the sentence. If they are successful, they could serve 25 years or life in prison.

Both Britons said they were serving as active-duty soldiers in the Ukrainian marines, given them protection as POWs by the Geneva Conventions. The court swept aside the legal position by convicted them on the charge of “being a mercenary”.

Aslin and Pinner have been paraded by Russia State media since their capture in Mariupol in southern Ukraine in mid-April. On Wednesday, State-run RIA Novosti showed footage of the men pleading guilty.

The trial concluded a day after Denys Pushilin, the Russian proxy head of the “Donetsk People’s Republic”, dismissed his Cabinet and replaced the men with Russian officials.

I utterly condemn the sentencing of Aiden Aslin and Shaun Pinner held by Russian proxies in eastern Ukraine. They are prisoners of war. This is a sham judgment with absolutely no legitimacy.

A Russian proxy official insisted that the three men were given the death penalty because of “the main, unshakable principle – justice”.

Commentators on Russian State TV whipped up viewers this week to support the executions.

Meanwhile in modern Russia: a screaming match on state TV as to whether captured British citizens Shaun Pinner and Aiden Aslin should be shot, hanged, quartered or exchanged for ransom (the release of Russia's frozen assets), as they hope to cause a rift in British society. pic.twitter.com/QCpOFbSpsO

In a statement earlier this week, Aslin’s family noted that the former care worker has served in Ukraine’s 36th Marine Brigade for nearly four years and “is not, contrary to the Kremlin’s propaganda, a volunteer, a mercenary, or a spy”.

They said Russia had already violated the Geneva conventions by releasing video of Aslin “speaking under duress and having clearly suffered physical injuries”.

The family of Pinner, a “well-respected soldier within the British army”, said he considered Ukraine “his adopted country” as he “enjoyed the Ukrainian way of life”: “In 2018 Shaun decided to relocate to Ukraine to use his previous experience and training within the Ukraine military….[He is] not a volunteer nor a mercenary.”