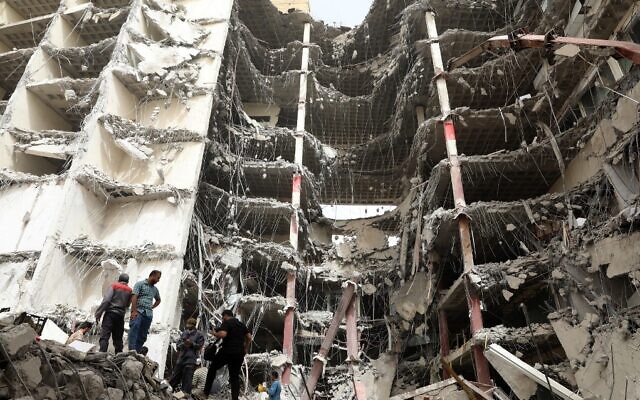 Iranians gather in front a 10-story building which collapsed in Abadan in southwest Iran, May 24, 2022 (Tasnim)

Facing recent protests across the country — over the deaths of 37 people in a building collapse in southern Iran, over a sudden rise in food prices, and over poor pay and conditions for teachers — the Supreme Leader has blamed foreign “enemies”.

Today, the enemies’ most important hope for striking a blow at the country is based on popular protests.

They hope to turn the people against the Islamic establishment and the Islamic Republic through psychological work, activities on the internet and cyberspace…and by spending money and recruiting mercenaries.

But the enemies’ calculation is as wrong as many earlier ones.

Demonstrators have been angered over corruption, mismanagement, and the initial failure of authorities to acknowledge the extent of the collapse — the Supreme Leader did not utter a word for six days.

Abadan’s mayor, booed and assaulted by the protesters, finally resigned on Saturday.

Ayatollah Khamenei also accused the US and its allies of “psychological war” because they chided Iran for seizing two Greek tankers, after the US confiscated oil from an Iranian tanker off the Greek coast.

“Who is the pirate here? You stole our oil. We took it back from you. Taking back a stolen good is no theft,” he complained.

The Supreme Leader was speaking on the 33rd anniversary of the death of the Islamic Republic’s founder, Ayatollah Ruhollah Khomeini.

The official death toll from the Abadan building collapse on May 23 has risen to 37.

Mourning ceremonies were held through the nigh:t on Tuesday for the victims. Videos showed a heavy security presence in Abadan, while demonstrators set fire to tires and blocked roads in the nearby town of Shadegan.

Reports are circulating in Iranian media that authorities have rated 129 buildings in Tehran as unsafe and “very dangerous” fire risks.

Tehran Mayor Alireza Zakani insists the list is not valid, saying that it “results only in unrest among people” and “citizens shouldn’t pay attention to it”.

Protesters interrupt the Supreme Leader’s emissary as he pleads, “My dears, please keep calm as a sign of respect to Abadan”.

Iranian State TV halts the broadcast at that point.

Football fans chant after a match, “Death to the Dictator”:

Iranian filmmakers and authors have issued a statement calling on security forces to lay down their guns instead of firing on protesters.

The roaring army of oppressed people from all over Iran has shouted for solidarity and sympathy with the suffering people of Abadan.

Now that public outrage over corruption, theft, inefficiency, repression and repression is accompanied by waves of popular protests, we call on all those who have become repressive agents in the military units to…lay down their arms and return to the arms of the people.

The statement follows reference to the Abadan collapse in the acceptance speech by Zar Amir-Ebrahimi at the Cannes Film Festival.

“Although I am very happy at the moment, part of my being is sad for the Iranian ppl who are facing many problems every day. My heart is with Abadan.” Zar Amir-Ebrahimi wins best actress at #Cannes for her performance in Ali Abbasi's "Holy Spider". https://t.co/9cPrQ0DDDz pic.twitter.com/BPHCwHOl5e

Facing widespread anger and protests over the deadly collapse of a 10-story building in Abadan in southwest Iran, President Ebrahim Raisi has instructed Ministers of Interior and of Roads and Urban Development to “immediately identify unsafe structures in the country and oblige their owners to reinforce these structures”.

According to Raisi’s website, he told a meeting of his Cabinet, “Owners of unsafe buildings should be obliged to strengthen the structures, and if anyone neglects it, he should be dealt with legally without any leniency”.

The official death toll from the collapse has risen to 31, with seven people still under rubble. All but two of 37 injured have been released from hospital.

People have been arrested at funeral ceremonies for the victims. The detainees include Arash Ghalehgolab, a reporter, and Mohammad Imani, a poet.

Photo: Rescue crews work at the site of the 10-storey building collapse in Abadan [WANA via Reuters]. #آبادان_تسلیت pic.twitter.com/s38jDziFUC

ORIGINAL ENTRY, MAY 29: Police have used tear gas and gunfire into the air to disperse ongoing protests over a deadly building collapse in Abadan in southwest Iran.

The official death toll from Monday’s collapse of the 10-story residential and commercial block has risen to 29 people, with 37 injured.